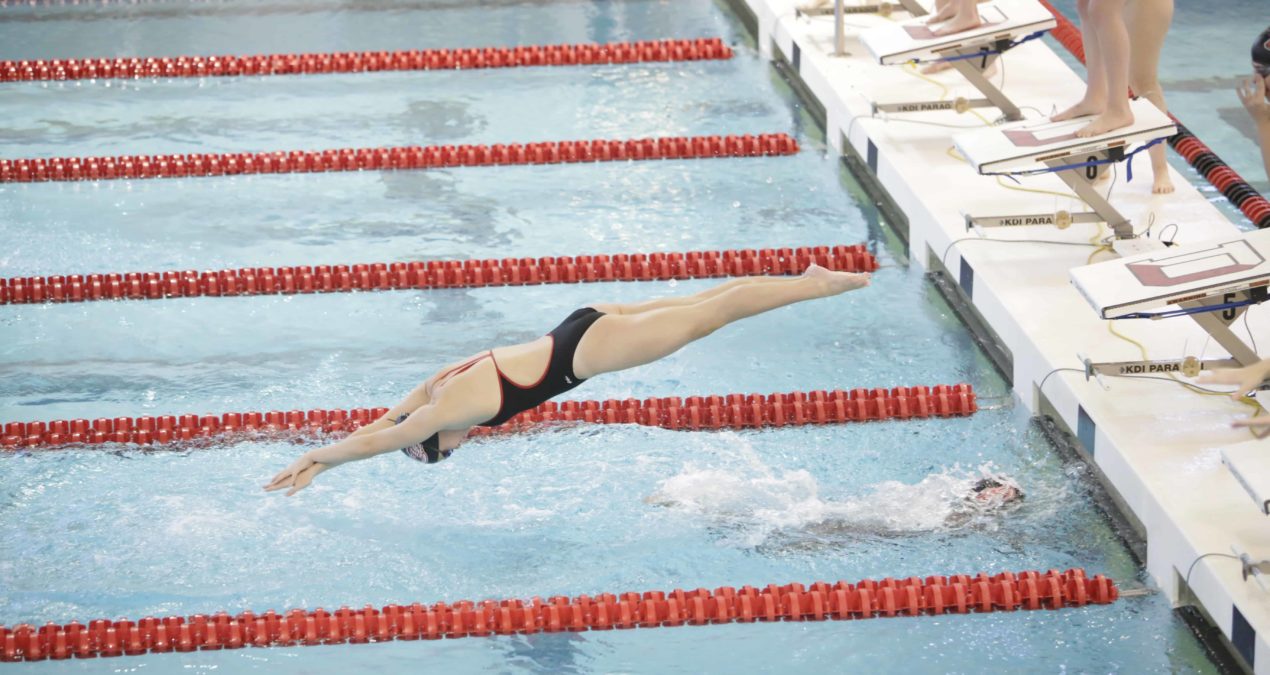 The Denison men and women’s swim and dive teams finished up the dual-meet portion of their season on Saturday when they faced Ohio Wesleyan University in a unique half-distance contest. OWU was routed by both of Denison’s squads. The Denison women took the meet, scoring 180 to 86, while the Denison men won in similar fashion, 180 to 75.

Per tradition, the final dual meet of the season was the senior meet, as the classes of 2016 competed in their final head-to-head contest in Trumbull Aquatics Center.

Before the meet started, the seniors were recognized and received bouquets of flowers before running under a tunnel of their teammates arms.

The meet got off to an exciting start with the seldom-seen 100-yard medley relay. Swimmers lined up on both ends of the bulkhead and each swam only one length of the pool each. The Denison Women’s swept the first heat, earning a first-through-fourth finishes. The Denison Men earned first-through-sixth place finishes in the same event.

Max Howes ’17 was first to the final wall of the 100-yard freestyle with a blistering time of 45.85, earning enthusiasm from his teammates on the pool deck. It was an in-season best for Howes.

The half-distance meet format gave an opportunity for the sprinters to shine in individual events, as 50’s of each stroke were offered. In the 50-yard backstroke, Elizabeth Dalziel ‘16 touched first with a time of 29.34. Marissa Bednarek ‘16 won the 50-yard and 100-yard breaststroke event with times of 29.69 and 1:04.77. In the same events Brendan Howley ‘18 captured first for the men, turning in a 25.96 in the 50.

In the paramount event for sprinters, the 25-yard freestyle, Carolyn Kane won the one-length race with a time of 11.42. Seniors Ryan Fleming and Conrad Wuorinen both punched impressive sub-10 second times in the 25, punching 9.77 and 9.95, respectively. Fleming had another notable performance in the 50 freestyle, finishing with a time of 20.75.

The 100-yard freestyle was the final event of the meet. The Denison men’s “A” and “B” relays battled for first place. Kenny Fox 19’ anchored the “A” relay to a winning time of 37.77, just two one hundreths ahead of the B relay.

For Flemming, the final dual meet of the year was bittersweet. Speaking of the class of 2016, Fleming reflected “We each support each other in and out fo the pool which has made the expereicne special.”

Flemming is looking forward to the NCAC championship. “We swam well this weekend so it will be exciting to see everyone swim fast at confrence.