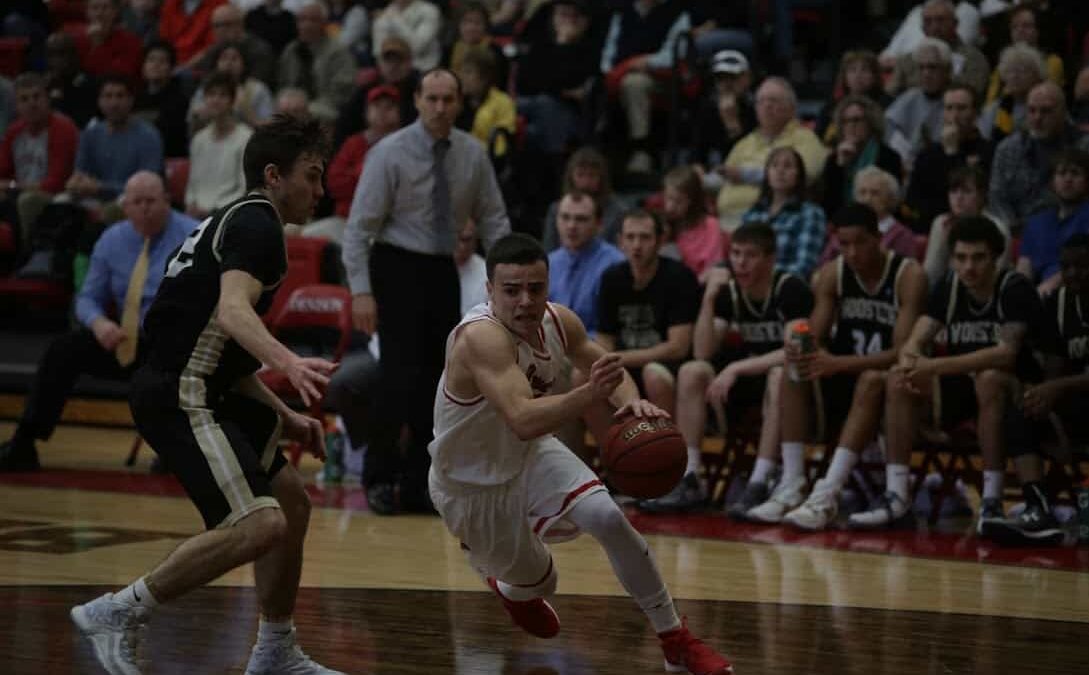 By the time Wooster’s Alex LaLonde slammed a dunk with seven seconds left, the comeback had already been made and the Big Red’s three-game win streak was snapped. Denison led by as many as 12 points but could not hold on, falling to 12-9 on the season.

Early on, the Big Red were intimidated by the first-place Fighting Scots, who brought with them an impressive contingent of parents and supporters.

Wooster raced out to an 8-2 lead in the first 2:28, prompting Denison head coach Bob Ghiloni to call a 30-second timeout. The Big Red hit back-to-back three pointers to tie the game up just 90 seconds later.

The first half was back-and-forth until the final 3:16, when Denison retook the lead with a 12-4 run to close out the period.  In this run, David Meurer ’17 made two buckets and dished out a pair of assists.

Out of the locker room, Denison held onto their lead, much to the dismay of the Wooster faithful who made the 90 minute trip southwest to Granville.

The Big Red even extended their lead to a dozen, at 52-40, with 15:11 left in the second half. The Scots would begin to gnaw their way into the deficit, still trailing by seven at the 10:30 mark.

Too much time was left on the clock as Wooster kept the game close before an 11-3 run gave them the lead for good.  Denison had offensive opportunities down the stretch but went cold when they needed baskets the most.

The Scots shot 58.5 percent from the field and held a 46-18 advantage in points in the paint. Denison took the opportunities Wooster gave them, sinking nine threes and hitting 26-of-28 free throws. Jett Speelman ’17 led Denison with 16 points and six rebounds. Garrett Collier ’18 followed with 13 points, as did Matthew Bauer ’17, who finished a perfect five-of-five from the field in 20 minutes off the bench.

“My shot felt good and it was great to play in front of 10 family members who drove from Chicago,” Bauer said. “At the end of the day, we played a great 35 minutes but could not finish it.”

It was not the first big game from the Denison reserve last week as David Meurer ’17 proved key with 16 points, four assists, and three steals in the Big Red’s 69-65 win on Wednesday, at Oberlin.

“I tried to be patient offensively and look for lanes to drive the ball.”  Meurer said.  “Once I drove I could either score, or dish to open three point shooters.”

Denison looks to get back in the win column with two revenge opportunities this week.  The Big Red will make the short trip to Gambier, Ohio for a Wednesday evening contest against the Lords. Afterward, Denison will return home to face Wabash on Saturday afternoon.  Tip off against the Little Giants will be at 3:30 p.m in Livingston Gymnasium.