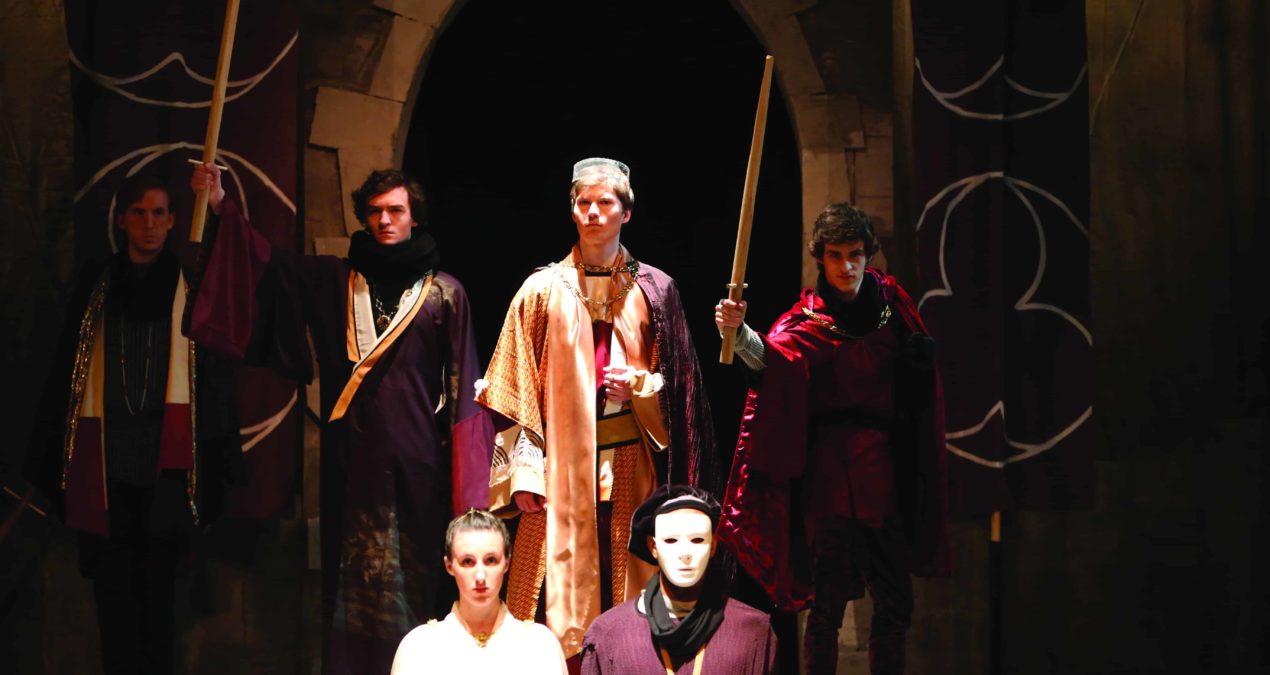 Richard III is an ambitious project even for the capable mettle of Denison’s own. The play clocked an impressive two and a half hours, but flowed quickly, holding on no scene any longer than necessary and allowing the blocking and costume choices to speak where dialogue does not. The performance began with the characters being introduced by their involvement in the War of Roses that precedes and informs the events of play, a thoughtful accommodation for a perhaps unfamiliar audience.

For those familiar, the clever weaving of narrative elements through the costumes and lighting were notable. Characters wore the flowers of their house in the War of Roses sewn to their clothes, while Richard’s crest was a combination of both. A green light appeared whenever Queen Margaret or her curse reared their ugly heads, all which show an attention to detail and conversation between all elements of this piece.

The sinew of these elements stretched thin at moments; some costumes were elegantly combined elements of Japanese, Chinese and European culture while others seemed like Richard, half-formed in their simplicity and hidden in their intentions behind too many layers of fabric and culture. Similarly, the wooden weapons seemed out of place in the scabbards of the elegantly dressed characters until the fight choreography integrates them into the deliberate movements of the scene.

While the brilliant castle stage with stained glass elements or European outfit accessories didn’t always compliment the Asian-inspired outfits, one must commend the multifaceted layering of seemingly discordant visuals when they did congeal, which was often. The fight scenes were incredibly engaging and beautifully arranged; one could have easily sat through another two hours of just that choreography.

The metamorphosing cast was kept distinct by clever costuming and blocking. Shakespeare enthusiasts will note Richard III’s part was diminished, a choice which gave the ensemble a satisfying balance and allowed for other characters to shine.

Peter Malicky ‘18 in his terrifying dream speech as Clarence presented some of the clearest and emotionally delivered text of the play and his switch into the Lord Mayor role was similarly engaging for his comedic facade applied to this impotent character. Shannon McDavid ‘17 and Madeline Grisaru ‘18 played their royal roles with elegant poise and palatable disdain for the eponymous villain dripping in their dialogue. Cole Stern ‘17 as Buckingham and Robert Templehof ‘18 as an assassin earned a few laughs over their characters’ nonchalance to the evil schemes occurring around them.

Of course, the main villain’s part bears the brunt of the play, Matt Harmon ‘16 being a malicious glue that, while fluctuating from falsely genuine to openly perverse, provided a binding in his consistently mesmerizing portrayal of the infamous Richard. Harmon’s presence filled every scene he occupied to the brim with a narcissistic cocktail of movements, facial expressions and emotions.

This production was indeed a cocktail, a captivating and strong adaptation of multiple layers of aesthetic and symbols supported by a strong cast, which when intermixed will intoxicate the audience with Shakespeare’s purest spirit.

A Star Is Born shines at Denison Film Society