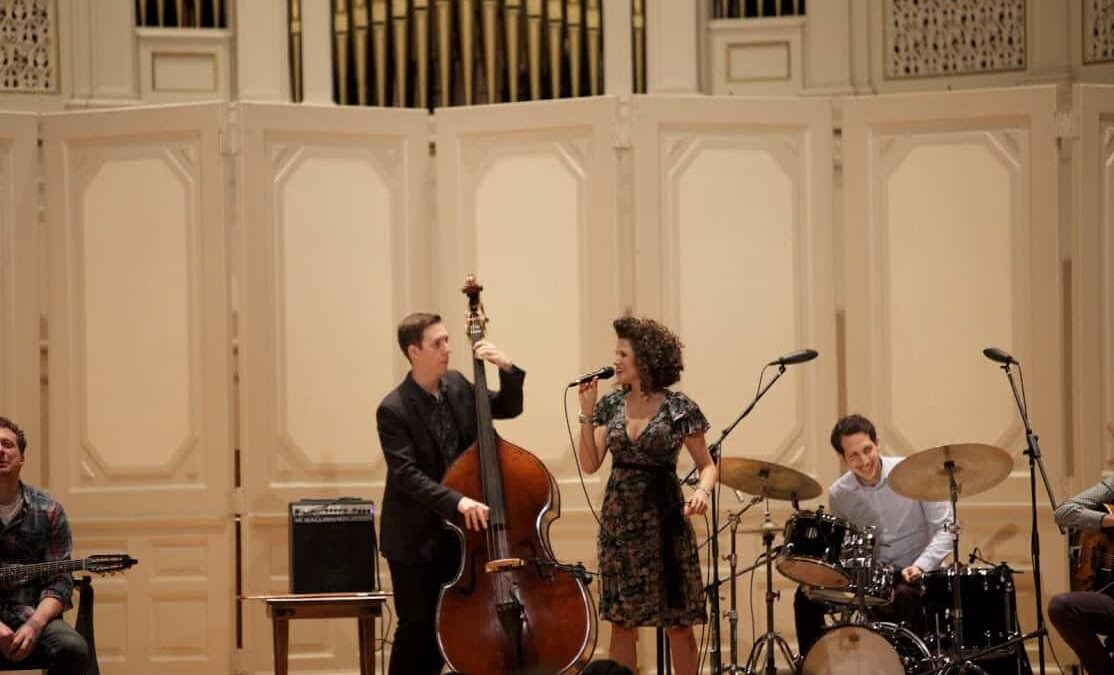 For a moment, it was as if the sloped aisles of Swasey Chapel were actually the charming cobblestone streets of Samois-sur-Seine where French singer Cyrille Aimée grew up.  The romantic rhythms of traditional French music combined with the fun, jazzy quality of the band were reminiscent of a whole other time period, when Gatsby-style parties were popular and reading poetry was not cheesy, but sweet.

Aimée and her band took the stage on Thursday, Mar. 3 as part of the Vail Series on campus.  Growing up in a small town in France, Aimée was heavily influenced by the presence of gypsies, who came to her town each year for the Django Reinhardt festival there.  She began singing with them, eventually journeying across Europe on her own to spread her music.  She was even amongst the top performers in a competition similar to “American Idol,” but turned away from the opportunity when she discovered that she would be bound under a confining contract.

Many of her songs were sassy and playful, “Nuit Blanche,” for example.  “Nuit Blanche” translated literally, Aimée explained, means “white night,” but it is really an expression which means to pull an all-nighter.  Aimée shifted her shoulders and hips with the guitar and wrinkled her nose in a teasing grin.  Sometimes she even improvised some scatting, moving her hands as if playing an instrument.

One of the best things about the performance, though, was the apparent chemistry between Aimée and all of the band members. Aimée would often gesture to one of them during their solo and was clearly focused on them more than the performance.

In one song, the other band members left the stage, and it was just Aimée and the bass player, Sam Anning, performing a song together.  When Anning would play a solo part, it was as if he was speaking to her, and she would even laugh as if he’d made a joke just by plucking the strings on the bass a certain way.

Similarly, Aimée told a sweet story about how Michael Valeanu, one of the guitarists, and she had lived close to each other in Brooklyn.   He would walk her to the subway station around 4 a.m. and wait for a train to come, sometimes waiting for a long time because there were fewer trains leaving at that time.  He would then walk across the city to another station to catch his own train.  “He was very chivalrous,” Aimée said sincerely.

One night, he brought a book of poetry which he read to her while they waited.  Aimée paused at this point in the story and looked over at Valeanu, who then hid behind his guitar in mock embarrassment.  “And then,” Aimée said, “I took my train.”  The song, “Nine More Minutes,” that they sang following that story told more about their relationship than what she’d said before.  It was about how they wanted just a little more time before the train came so they could be together.

Even more than the relationship between the band members, their apparent love for music was particularly contagious.  “I loved it,” Hannah Goldman ’17 said.  “You can tell they’re all enjoying it.”

Emma Share ’16 agreed, saying, “I loved her joyful energy and the melding of languages…She’s very expressive.”

The performance had the ability to transform the night into a tour of France, bringing in the romantic flair of Paris and the freeness of a gypsy festival into one place, enjoyable for anyone who listened.