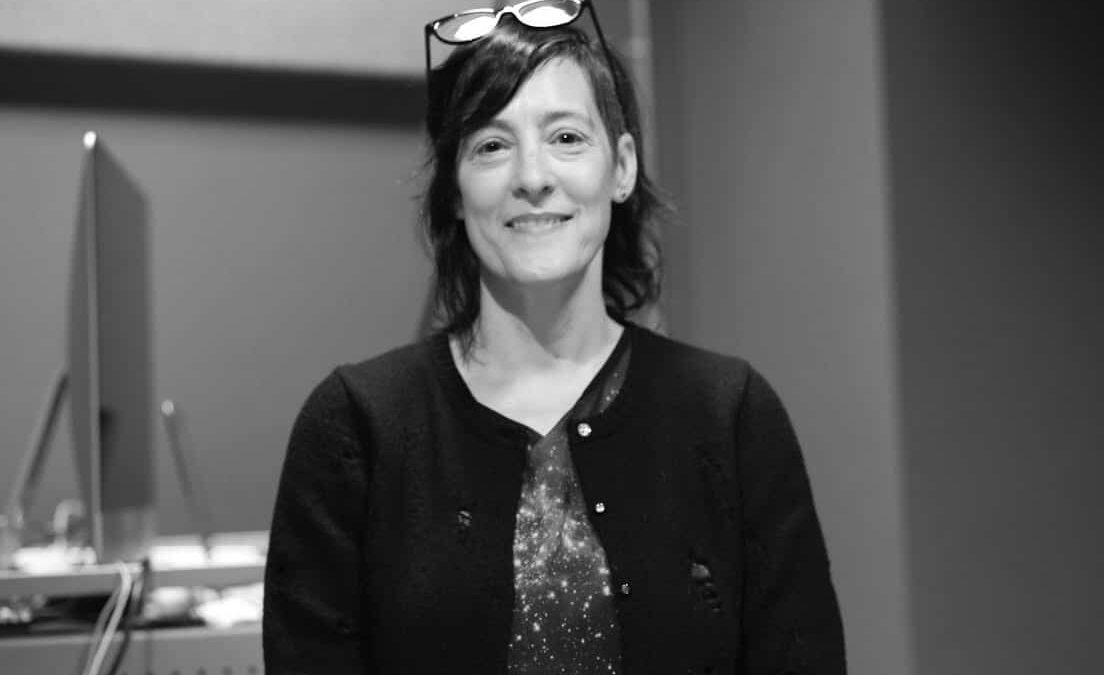 The boutique looks pretty normal on the outside, and to many passersby, it seems to be a new, trendy shop in town.  Stepping inside, however, shoppers quickly see that this is no ordinary boutique.

In one area, pantyhose are stretched from the floor to the ceiling in a grotesque manner.  Curling irons spin in a bizarre, frightening machine.  Fun house mirrors warp the shape of passing bodies.  Nail files stick out of displays, looking like torture devices, as the artist who put them there, Elizabeth Leister, describes them.

Leister, a visiting Vail Series artist in residence for the week of Feb. 21, described this exhibit during her presentation on Feb. 23 in the Knapp performance space, starting with work she had done twenty years ago, when she had visited Denison for the first time.

Upon her return, Leister had even more exciting pieces to share.

Her journey as an artist began at the Tyler School of Art when she was an undergraduate.  She began painting in an abstract, expressionist style, inspired by the works of Jackson Pollock.

After graduating, however, she stopped painting and began work with sculpture.  In the ‘90s when she graduated, many socio-political issues arose, such as the threat to abortion rights, , that had an impact on her work.

“Painting was too slow to come to ideas,” she said, and sculpture was a way that she could bring these issues into the 3D world.  This was how her piece, “Delusions in Tongue and Cheek Boutique,” her exhibit of the distorted expectations of the female appearance came together.

Leister found that she was interested in these expectations and this translated into several pieces that dealt with feminist issues.  She created a sculpture of a wedding dress made from plastic that could be found at a Home Depot and other works which explored the female body in general.

Ali Rose ’18 found it interesting, “her way of using gestures and performance in a new way…using materials in an innovative way.”

One piece was a video of her belly button, the camera lens pressed against her skin so that, at first, the image is dark.  When she takes a breath, however, her belly button moves away from the lens and comes into focus.  Projected onto the wall, it is as if the wall itself is breathing.

Grad school “really broke down my ideas,” Leister said, and that was when she began “turning inward.”  Her pieces still explored the body, but focused on the inner parts, the intestines, for instance.

The exploration of the body intrigued her, causing her to question, “What does it mean to be a body?”  She especially found it interesting that the body is in constant transformation.

The same problem remained, however, that she had dealt with in painting; she needed instant gratification.  The transition to photography and video was an easy one to make because of this.

Drawing was still very prevalent in her work, however.  Many of her exhibits included the recording of herself experimenting with a drawing.  Some pieces dealt with deterioration, in that she would draw something only to smudge it in her video and layer on top of it another sketch.  Sometimes she would draw a face or a building, and strategically erase it in a time lapse so that the figure disappeared.

Some of Leister’s most intriguing works, however, and one that influenced her plan for the Tiny Tutti event that occurred in the same week, are her gesture drawings.

In these works, Leister projects video footage, live or recorded, onto a screen and traces the outlines of a dancer’s movement in motion.

In one piece, the live footage was projected and the dancer was moving at the same time Leister was drawing, the two artists side by side on stage.

Leister’s interest in the body in both the mundane, such as her video footage of her belly button, and the extraordinary, such as the movement of a dancer, inspired students.  When asked about how Leister distinguishes her own movements from that of a dancer as she traces the figure, Leister replied, “It’s so physical, I really feel like I’m dancing.”

Ryan Song ’16 said it is “inspiring how people can explore different types of art by random experiences and daily life, especially in the video work with her bellybutton…She noticed a lot of stuff normal people ignore…she transforms it into art.”

Between her beginning works as an undergraduate exploring the expectations of women’s appearances and her latest works in gesture drawing and other digital media, Leister uses the body and the exploration of it as beautiful artwork.