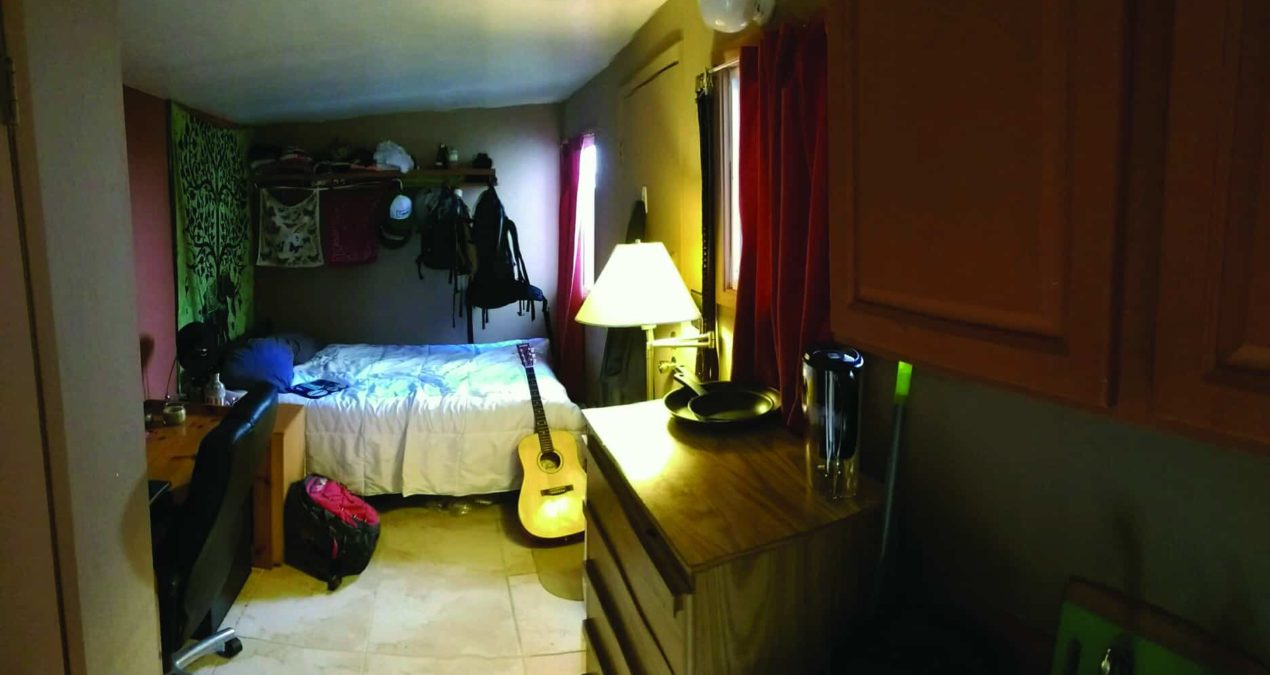 With the influx of tech companies flooding into the Bay Area of California, housing has become astronomically pricey for residents. While many people have had to move away from the centers of Oakland and San Francisco because of the costs, with with median home prices increasing by 14 percent and rental prices pushing $2,500 a month, some have decided to downsize in order to save money and attempt to live more simply.

For alumnus Matt Koester ’15, who recently moved out to Oakland to work for a major healthcare company, living in a tiny house was more out of necessity than choice.

“Technically it’s a cottage in the backyard of another house,” said Koester, an environmental studies and economics double major working as a sustainability fellow, “I’m living minimally but so is everyone out here.” Measuring at just 7 x 20 feet, the one room home is as wide as his bed is long. It comes with a sink and countertop, dresser, drawers, closet, desk and a little bathroom with a shower and toilet that are almost on top of each other. Koester says he enjoys the freedom it offers.

“I’m not weighed down with personal possessions, I can pick up and leave whenever I want.” Koester frequently leaves his Oakland dwelling by way of bike or train, and plans to visit Yosemite on the Amtrak train next week.

“With how much money I make, I’m glad I don’t have a car,” Koester said. “I’m four miles away from my job so I can just bike there. I guess I am somewhat constrained in that I can’t leave the urban area without the help of my friend’s vehicles, but I think collectively going places with other people is part of sustainability.”

The tiny home trend is not limited to Bay Area, or even America for that matter. Space is becoming an increasingly luxurious commodity around the world.  As the global economy continues to shift from agrarian to the industries of tech and service, more people are leaving rural areas and moving to cities. Edric Choi ’18, a Chinese student who lives in the Philippines, claims that there might be a generational change in East Asia attributing to this as well.

“People have started having smaller families, which could be leading to smaller homes,” Choi said. “Like I have two siblings, but my mom had five, and my grandparents had ten. Of course the housing in places like Hong Kong is just so expensive that people have to live in smaller places.”

Koester wants people to understand that just because someone lives in a tiny home doesn’t immediately constitute that they are living a more sustainable lifestyle.

“Living minimally isn’t contingent on having a small living space,” he said, “It’s about what you buy, what you eat, how much waste you generate. The fad is cool, but you have to look at it critically. You could spend $25,000 on a home or $25,000 on a community garden. People need to be more conscious, not be so obsessed over the trend.”

As a sustainability fellow for a healtcare company, money is tight. Koester receives food stamps from the state government, and largely subsists off of a vegetarian diet cooked on a hot plate. He feels that his time surviving the dorms of Denison actually prepared him for the minimalist lifestyle.

“I’ve had a lot of experience living at small spaces at Denison,” said Koester, “We shared common resources and spaces, so you could say my house in Oakland is an extension of that.”

As the population and housing prices continue to increase, home sizes are expected to inversely follow suit. Luckily for Denisonians, housing on the Granville campus may be the best preparation for the impending benefits and challenges of the tiny home lifestyle.

Students Coming Together Through Music