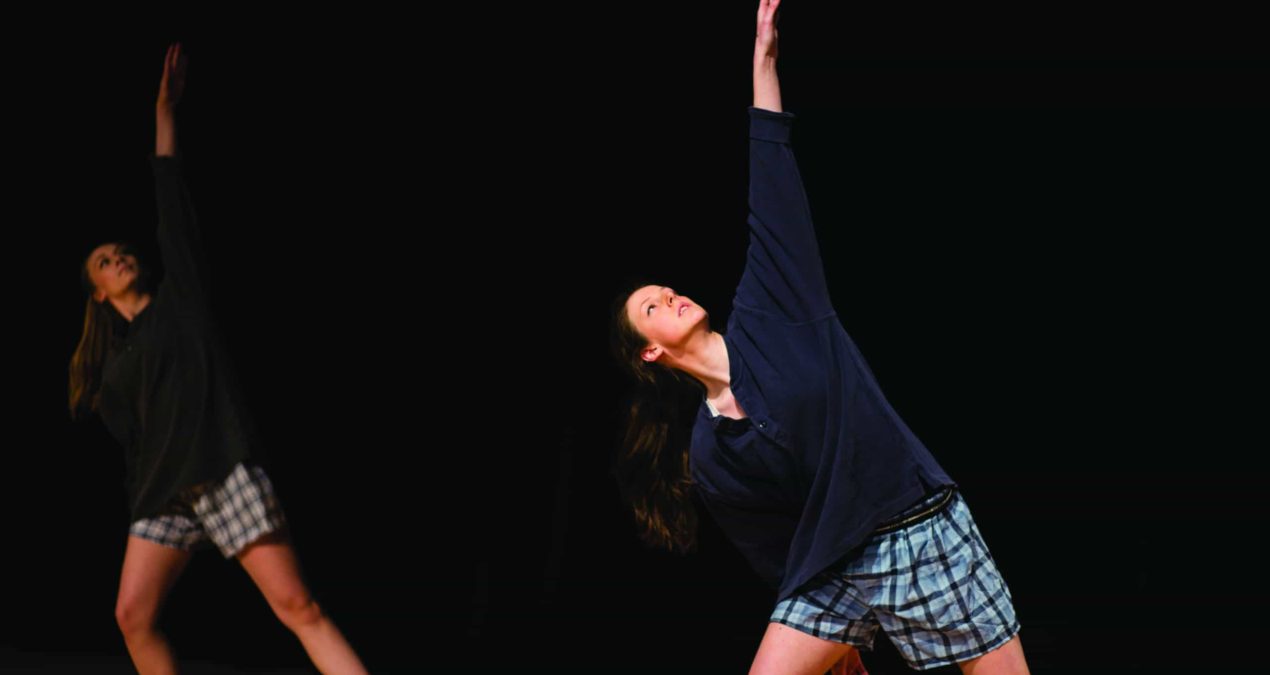 With each exhausted step made around the wooden floor of the Doane Dance space, it was evident that the completion of Callie Towles’ ‘16 senior research and, effectively, her career at Denison, was beginning to dawn on her.

The project, “Physicality of Mentality,” combined her work in psychology with that of dance, culminating in a powerful experience that pulled emotions from both Towles and her fellow dancers.

The first dance was arguably the hardest to follow.  But, Towles reminded everyone to read the bulletin, which would help in the understanding of the piece.  The bulletin read, “This is not a demonstration of anything other than what it is.”

The dance, which consisted of six women in pajamas circling around while one stood stiffly and craned her neck towards the ground, almost looking as if she was trying to break it.  Others mimicked her at times, but she was effectively alone, ending with the others against the wall simply watching her until they began circling, paying no attention to her.

The second dance, called “Safe Space,” was similar, the same six girls circling around in much more fluid motions, suddenly interrupted by growing closer together and kicking the air, grunting, struggling with nothing in particular, only to resume the calm, fluid motions once more.  The title, “Safe Space,” seemed to refer to the tension between the calm safety at times in contrast to their more violent motions.

In the final dance, Towles joined the team, and they performed a series of motions in unison, leaping into the air, circling and then rolling in a backwards somersault.  At this point, Towles differed from the rest, failing to complete the somersault and simply lying on the floor facedown.

The other dancers waited for her to get up and then they started the series over.  This time, Towles failed just before the somersault.  The dancers waited, then began again, this time leaving her behind.

At one point, Towles curled up on the floor facing away from the audience.  The other dancers stood watching from the sides, until one person lay down next to her and they slowly began to get up together.  It took a few tries, but eventually Towles stood.

Out of breath, Towles circled around, appeared to be nearly in tears.  This is when it seemed most apparent that the dance was reflective of her life, and that her time at Denison was coming to a close.

After the performance Towles said, “It’s bittersweet…I’m really happy with what people are saying about it…my dancers put so much effort into it.”

The project clearly took a lot of energy and Towles invested a lot into it.  “It took a while to get to this place…the biggest struggle was myself.  I had a few habits I wanted to get over…there was a lot of editing.”

Towles, who was the first of the senior dance performers to show their research this spring, finished with a little advice to other dancers and researchers in general.  “Stay on top of things and don’t get stuck in your own head…the outcome can be so worth it.”