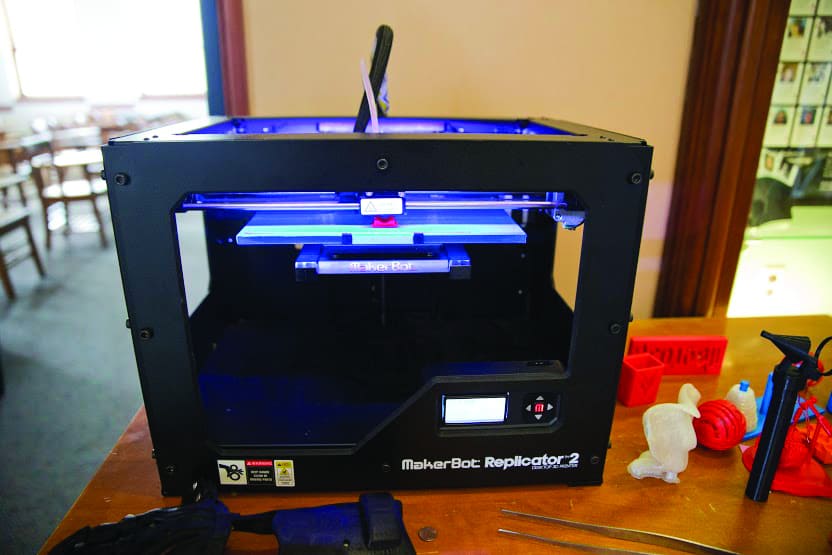 Denison has taken a step into the future with a particularly new addition to the Mulberry lab. This semester, Professors Lew Ludwig and Chris Faur offered a Denison Seminar exploring the frontier of science, mathematics and art: 3D printing. Every Thursday and Friday this handful of machines can be seen whirring back and forth as students design, program and print anything they can imagine.

The inspiration first came to Ludwig at a math conference, a little over a year ago. During a presentation on Knot Theory (an area of interest for Ludwig), one presenter exhibited how they were able to construct a physical representation of a mathematical theory using a 3D printer. The specific print in question was called the “Ludwig Knot,” based on previous research by the Professor himself. “They had me at hello,” he said.

Upon returning to campus, Dr. Ludwig offered a one-credit seminar using two printers that he had found on campus.

“We just kind of played around, stumbled around, but ended up making some pretty impressive things,” he recalls.  This 1-credit course would not be enough, however, to satisfy the growing demand for the 3D printers on campus. Ludwig wanted to expand the opportunity to interact with this brand new technology, and so he approached Chris Faur with a proposal.

“I’m not an art person, so it’s kind of out of my comfort zone,” Ludwig said, “Chris Faur is an artist, but again this technology is out of his comfort zone. It seemed like a natural match for the two of us to work together and create a Denison Seminar.”

Registering as a Denison Seminar would allow and provide the necessary funds that this technology costs. Taking the allocated capital typically used for travel by Denison Seminars, Ludwig and Faur instead invested in the machines and supplies themselves. Today, you can purchase one 3D printer for around $1,500. The seminar houses approximately six machines, split among several students.

And the students love it. The Denison Seminars are only available to current sophomores and juniors. The course, however, filled up with juniors before sophomores even had the chance to register.

“The demand and interest in this technology is huge,” said Tristan Domville ‘17, a current student in the class.“It’s very tangible,” he said, “you can design something and then have it in your hands a few hours later. You really see the work you put into it, you get results quickly and it’s very satisfying.”

When asked about the relevance of cultivating these skills, Domville said, “I think it’s really important for prototyping. It allows companies to make a model of something very quickly and very cheaply.”

One printing session usually only takes a few hours. Compare this to the several days that it may take another company to produce one prototype, 3D printing is an alternative that saves a lot of time and money.

With all of the buzz that 3D printing is creating in the larger world, it is no surprise that the fervor would eventually reach the hill. Ludwig plans on opening the machines up for public use following the end of this semester.

The library has sanctioned space for Denison’s very own “Makerspace.” In other words, a space where people with varying talents and skillsets can come together to create anything. “That’s the liberal arts, right?”  Ludwig said. And he is right- highlighting numerous examples of students from various disciplines all working together to synthesize something completely new.

Browse the class website at www.3dprintingdenison.wordpress.com and check out all of the projects they have posted.

A day in the life of a Community Advisor