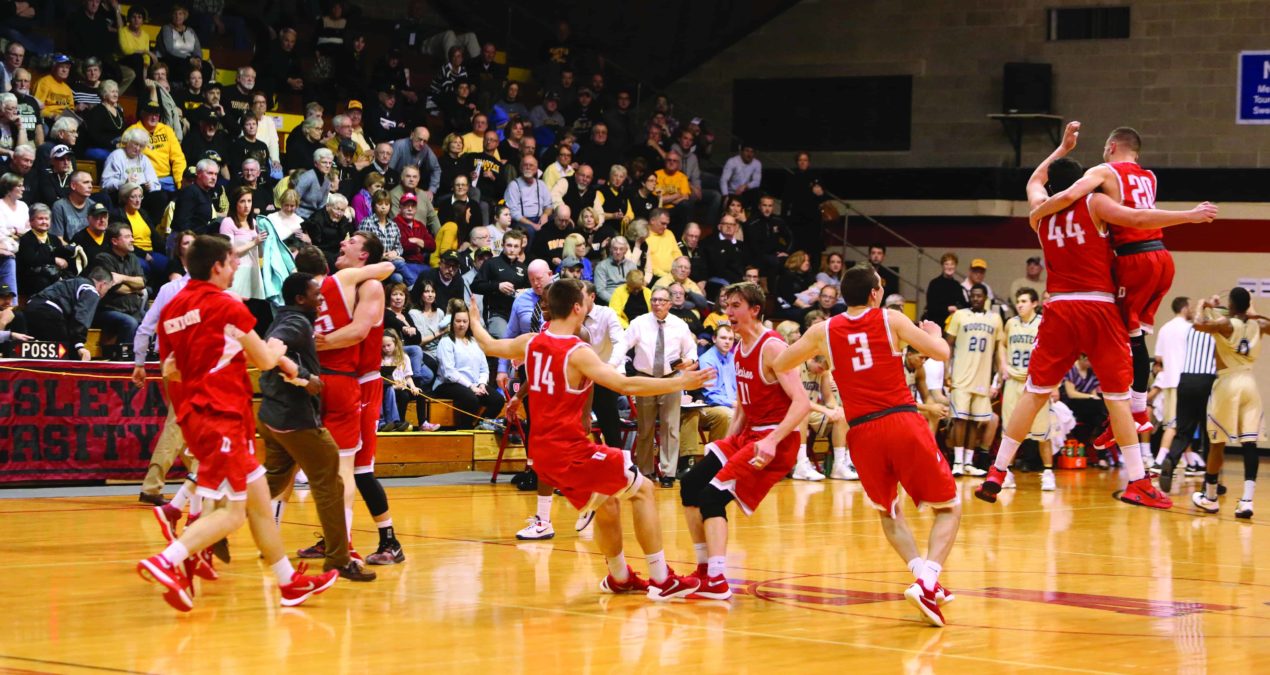 No script could create the excitement felt between 19 players, three coaches, seven cheerleaders and hundreds of fans who made the trip to Delaware, Ohio, to watch the Big Red make history, winning their first ever NCAC tournament title.

Prior to the tournament, Patrick Keller ’16 had some impressive foresight.  “We’re planning on winning it,” Keller said. “Vegas odds aren’t great, but we’ve shown we can play with every team in there. We gave up leads on OWU and Wooster. We’ve got to put it together and finish.”

It’s safe to say they finished.

Denison entered as the tournament’s number four seed, hosting a quarterfinal round game for the first time since 2005. 53 bench points propelled the Big Red to an 81-75 victory over Wittenberg, the winningest program in Division III history.  David Meurer ’17 led all scorers with 24 points, including the 1,000th of his career, while Matthew Bauer ’17 finished with 19 points on five-of-six shooting from three.

Denison’s semifinal matchup was on the home court of the tournament’s top seed, 10th-ranked Ohio Wesleyan. The Battling Bishops forced 22 Denison turnovers, but it was not enough. Between shooting a scorching 58.7 percent from the field and a +30 rebounding margin, Denison set a season high in points in a 95-85 victory. It was the first time the Big Red beat OWU on the road since 1996-97.

With the conference championship game less than 24 hours away, the Big Red had to prepare for The College of Wooster, which tied OWU for the conference regular season title and is the second-winningest program in Division III history.

The first half was dominated by the Scots as they grabbed what seemed like every rebound, getting numerous second chance opportunities and plenty of layups.  Jett Speelman ‘17 scored 14 first-half points, which kept Denison within striking distance, although Wooster would extend its lead to as many as 16 early into the second period.

But Denison fought back, hitting eight three pointers in the second half, including a trio of impressive swishes from Meurer and Garrett Collier ’18 banking in his second three of the season. The Big Red held the Scots to just 28 points in the second half, tying up the game and forcing overtime.

In the extra period, Denison proved fresher than Wooster, outscoring the Scots 19-8 on the way to a 92-81 win.  Meurer alone had nine points in OT, finishing with 28, as well as five assists and five steals. He was named tournament MVP. “It feels really good to be MVP but it’s really all about us.” Meurer said.  “It means a lot [to win in my hometown and] being able to do it with my best friends.  Especially Jett [Speelman].  After he transferred I knew we had a legitimate shot and we got the job done.”

The euphoria of winning a conference title did not fully set in as the buzzer went off. For John Cheng ’16, who tore his ACL in the off-season and only started playing in January, “this championship has made the injury worth it.  Becoming injured made me stronger and hungrier to get out on the court and help the team win in any way I could.”

For the first time in program history, Denison and head coach Bob Ghiloni cut down the nets as NCAC champions. At 17-11, they are tied for the most wins since 1996-97 and the fourth-best total in program history.  Coincidentally, ’96-97 was the last time the Big Red made the NCAA Tournament. This time around, Denison will play Alma College in Cleveland Ohio on March 4.

No matter how they perform in the big dance, there will finally be a men’s basketball championship banner hanging in Livingston Gym. “This team has been able to break a lot of records, break a lot of hearts (including our own sometimes), and now has left a legacy,” Sean Carlin ’16 said. “That’s what we have been after: a legacy.”

“Looking forward: who knows?” Carlin added. “Cinderella teams are dangerous. Now I suppose we will see how well we can run in glass slippers.”