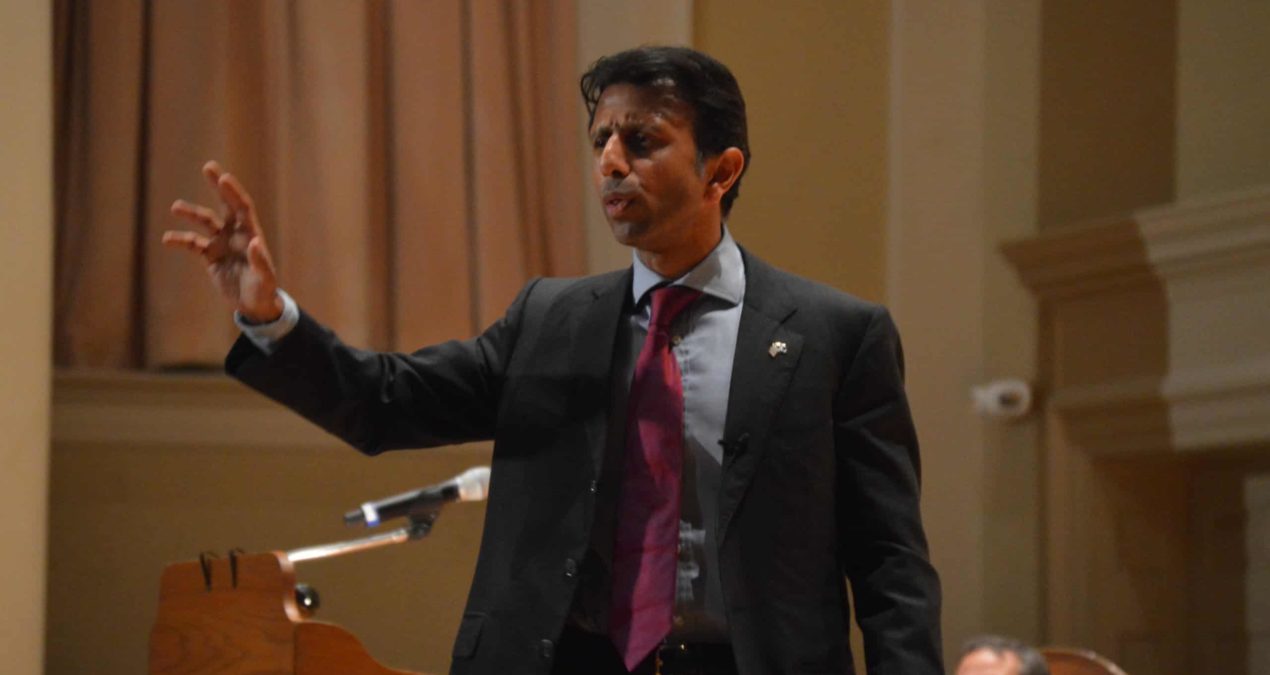 Former Governor Bobby Jindal visited campus last Thursday as part of the Mary Elizabeth Babcock Lectureship. Governor Jindal was a two term Republican Governor of the State of Louisiana from January 2008 until January of 2016. Recently, Jindal was an unsuccessful presidential candidate as his campaign did not gain national traction. He dropped out of the Republican Primary in November of last year.

Before Jindal gave his lecture, he attended several invite-only events on campus including a lunch, a question-and-answer session and a dinner with students.

Following these events, Jindal gave a lecture in Swasey Chapel titled “Challenges and Opportunities in America’s Political Landscape: The 2016 Election and Beyond.” The lecture was mainly focused on issues such as education and healthcare. During the lecture, students silently protested against Republican Party policies such as defunding Planned Parenthood by holding homemade signs.

“Even though former Governor Jindal and I came from a place of different political views, being able to speak to him as part of my political science curriculum was a really unique opportunity,” said Brooke Hubbard ‘18, a political science major from Boulder, Colo.

Hubbard added that, “He was respectful, intelligent and took time to answer our questions even when it was clear we didn’t agree.”

Jindal set aside part of his day to answer questions from the media outlets here on campus. During the session, he covered a wide range of topics including the recent terror attacks in Belgium and the speculation around him in regards to the GOP Vice Presidency.

“We need to have a much more aggressive stance against ISIS oversees before they come attack us at home. Specifically, what that means is, what we saw in 9/11, what we’ve seen since then, if you allow terrorist groups to have territory in which to train and prepare, it allows them to conduct much more sophisticated attacks,” Jindal said.

During the interview, Jindal discussed his plan to alleviate some of the partisan gridlock that has been happening at the federal level in Washington, D.C.

“In 2008, Senator McCain’s campaign asked me to be vetted and I decided not to be because I was a newly elected governor and I had a lot of things that I wanted to get done… I am not seeking to be Vice President. I am not a supporter of Donald Trump; I’ve been very critical of Donald Trump. I will support my party’s nominee,” said Jindal.

The respect that Jindal had toward students, especially students that disagreed with his policies, resonated with students.

“I was impressed that Jindal understood that many Denison students did not agree with his politics and he was respectful to the people that wanted to protest,” said Rebecca Levin ‘16 a political science major from Chicago. Ill.