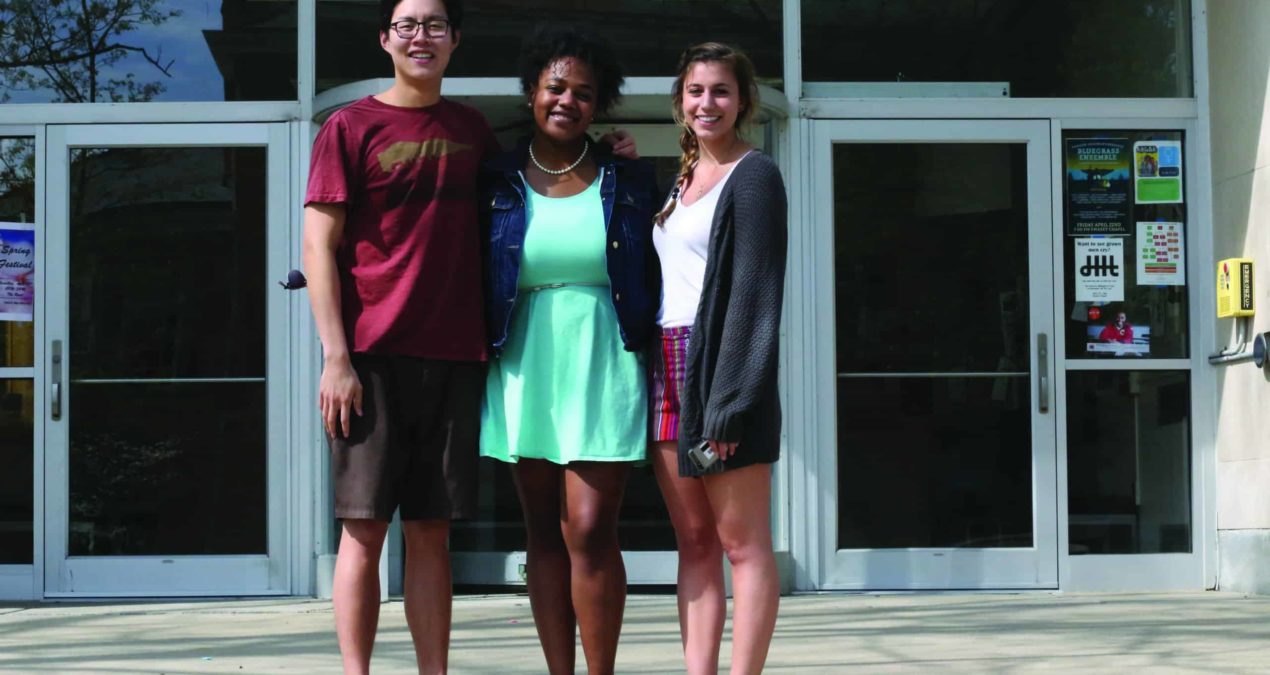 As the final weeks of this academic year come to a close, everyone is saying goodbye to their senior friends, the ones that are technically ready to take on the “real world” without the help of Dr. Weinberg or Connie at Huffman. At The Denisonian, three writers and artists who blessed this staff this year will enter alumni status: Nelson Dow, Photo Editor emeritus; Jewell Porter, Editor-in-Chief emeritus; Elaine Cashy, Managing Editor emeritus. Initially, none of them were that enthusiastic about The Denisonian.

“I was assigned two articles on my first day, but I dropped both of them,” said Porter, who wrote on her high school newspaper and literary magazine. Porter attended the content meeting, the paper’s weekly meeting where writers and editors discuss what stories they will cover in the next issue. The editors tried to take advantage of her literary background and dumped multiple stories on her, but Porter would not write until the next semester.

Dow, whose interests lay in photography, was roped into the position of photo editor by a relationship with the Editor-in-Chief at the time, Curtis Edmonds ‘15.

“I did leadership winter break with Curtis Edmonds,” Dow said. “We were in the same group, I told him I wanted to be an adventure photographer and he asked me a few days later to be the photo editor. Mainly because the one they had kind of just quit. I was just like yeah sure, why not. I had zero experience with professional photography except with my IPhone and a little point and shoot camera I got as a teenager.”

While Dow did not have to work his way up the ladder to make it to his final position, Cashy and Porter started as section editors before becoming the managing editor and co-Editor-in-chief, respectively. Cashy started as the Arts and Life assistant editor.

“The articles were fun to write,” Cashy said. “I liked working for Arts and Life because it got me to go to stuff that I wouldn’t normally go to. For example, I went to a gospel concert and that was really fun. It helped me branch out. It forced me to do things outside my comfort zone and go to things that my friends didn’t necessarily want to go to with me.”

Porter, who saw the other sections such as Cashy’s Arts and Life as competition for readership to her news section, wanted her section to be the best.

“I’m just really competitive, and Curtis [Edmonds] pushed me,” said Porter, who also came onto the staff when Edmonds was one of the Editors in Chief. “It was really annoying but it made a really good product. I think that’s a really important part of being an Editor of the Denisonian because if you don’t want to do a good job you’re not going to. The EIC can fire or replace you, but they can’t make you.” Porter, Cashy and Dow excelled at their positions, and while Dow was busy taking arresting shots for the Denisonian, Cashy and Porter moved up to become executive editors of the paper.

Porter was elected Editor-in-Chief for the 2015 calendar year along with Laura Carr ’17. Cashy became managing editor, but would perform only the basic duties of her position because she was studying abroad in Spain for the first half of her campaign.

“As news you focus on that section, content, writers and layout.” Porter said. “But as Editor-in-Chief you have to keep an eye on everyone else’s section. I didn’t know anything about sports: what it should look like, how it should be. As far as sports etiquette, I had no idea. It was good to have Laura [Carr] around.”

The managing editor of the paper is in charge of making sure the office is in good shape, budgeting, and making sure individual editors are staying on task. One of the most important jobs is to be the third voice of the two Editors in Chief, mainly if there is a discrepancy, which there often can be.

“You have to be very careful to be objective and unbiased when you’re the deciding vote,” Cashy said. “I liked being the deciding vote, but it taught me about navigating disagreements so people felt their opinion was heard.”

Now that their time is coming to a close at Denison, the three look back fondly at the experience at The Denisonian, but acknowledge the benefits of having more time in their schedule.

“I miss photographing things, but it’s nice being able to pick and choose,” said Dow, whose portfolio is online at nelsondow.com. “I really like shooting sports and dance performances, but I’m not big on speakers and dialogues.”

Cashy will also miss The Denisonian, but enjoys the extra free time.

“I don’t have to go to any meetings, but then I get really excited when people would ask for my help,” Cashy said. “I guess it makes me feel special?” And while Porter will not be working for a newspaper right after college, she knows the experience was valuable.

“It works on your writing skills and leadership skills. You get a weird confidence from it.”

The 2016 staff, and all future staffers of The Denisonian, will miss these three all-stars of 2015.