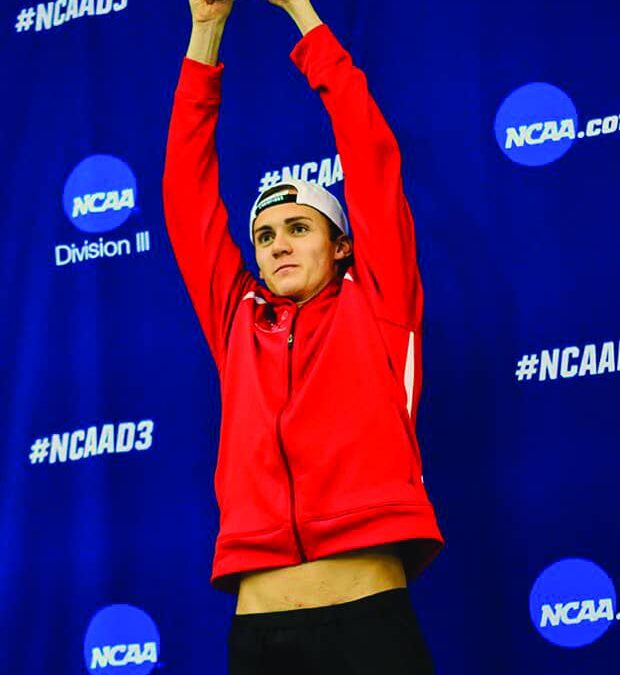 The past few years at Denison have been nothing short of a wild ride for swimmer Jack Lindell ‘17. Not only was he named National Swimmer of the Year and set a new DIII national record in the 200 yard individual medley, Lindell also won four national titles just this season and was featured in Sports Illustrated last week. Last year, he set two new varsity records and took third place in two of his individual swims.

The biology major and spanish minor from Edina, Minn. explains that being a student athlete “really challenged my time-management skills but has also been extremely rewarding by getting a great education as well as continuing the sport I have such a strong passion for.”

Before college, he was being recruited by a few DI schools, but quickly realized the lack of focus on academics that those schools had. “It didn’t seem like they put a large amount of focus on academics and instead were more focused on being athlete-students rather than student-athletes,” Lindell said. “I took a trip to Denison in the fall of my senior year and immediately knew that this is where I wanted to attend.” Coming into college, he never would have guessed that his junior year would come to a close with such success.

Since beginning his academic and athletic career at Denison, Lindell has achieved many of his goals. “I achieved my four-year goals already which will make next year that much more exciting. I can’t imagine attending Denison without being a part of such an amazing program,” Lindell said.

One of the most memorable of his accomplishments was winning National Swimmer of the Year. He said that “it was an incredible honor to have been selected as the swimmer of the year and to cap it all off Denison’s head coach won national coach of the year which made the podium that much brighter.”

This 2015-2016 season brought many highlights for Lindell including the mid-season meet at Miami of Ohio. Lindell said that “it was great to be able to go out and throw down some fast times while having fun,” and “it was really the first time that the team came together as a single unit and I felt like we were really able to bond over that weekend.”

All of the hard work that Lindell and teammates put into the season paid off at Nationals which were held in Greensboro, N.C., where the men’s team placed first overall. “Nationals is obviously the biggest stage we reach,” Lindell explained. “It is the culmination of 6-plus months of 5:30 AM mornings and countless yards trained.”

Though Nationals was an extremely exciting time for Lindell and the team, he explains that the week was quite a blur. “I would wake up every morning wondering if I had dreamt what happened the previous day.” Performing at his best when it matters the most is something that is very important for Lindell. “The atmosphere is intense but I feel like that is the only way to perform.”

Lindell’s success at Nationals has opened many doors for him including the opportunity to be featured in Sports Illustrated. “I received an email with a few questions regarding my experience at nationals and was asked if I would like to be considered for the opportunity and I immediately agreed,” Lindell said. He explained that he “never would have thought that I would be featured in a nation-wide publication of any kind so to have the opportunity has been an honor to say the least.”

Being a student-athlete at Denison has taught Jack many things including leadership and the ability to speak up for others. It has taught him that “in order to gain something you have never had/achieved before you are going to have to give up something in return,” he said. “If you want something bad enough you can do anything to achieve it if you are willing to accept change.”