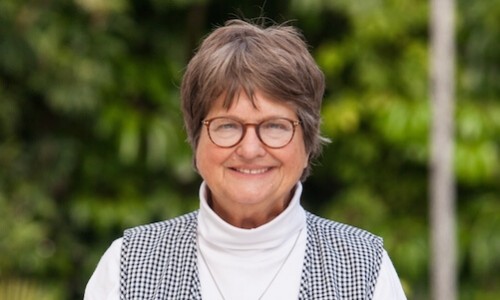 With the class of 2016’s  graduation only about a month away, Denison has officially chosen Sister Helen Prejean as the keynote speaker for the 175th Commencement Ceremony. Prejean has made great efforts to bring the death penalty into dialogue and she travels globally giving talks about her ministry.

Along with her significant work with the Catholic Church, she has lectured at Denison as a featured speaker in the college’s Spectrum Series, as well as joining various classes, engaging with students and faculty.

President Adam Weinberg said, “Sister Helen Prejean has inspired Denison students and faculty through her work with the disadvantaged, the voiceless and the powerless.

Her remarkable commitment to civic responsibility is a terrific example of the difference one person can make.”

Prejean’s address to the graduates and their families is titled, “Dead Man Walking: The Journey Continues.”

PJ Fallon ’16 said “It’s always fun anticipating, and ultimately finding out, who the college will bring in as the commencement speaker.

I think Sister Prejean is a greatly unique choice, and whether you’re religious or not, will offer an insightful perspective that aligns with Denisonians being discerning moral agents.”

“I’m excited to see what she has to say, and will no doubt pose our graduating class with a great challenge. What that challenge is, I guess we’ll have to wait and see.”

During Prejean’s time spent working at the Hope House in New Orleans from 1981 to 1984, she was asked to correspond with death row inmate Patrick Sonnier.

She later became his spiritual adviser, and after witnessing his execution she wrote a book about her experience called Dead Man Walking: An Eyewitness Account of the Death Penalty in the United State.In the United States, this book was number one on the New York Times Bestseller List for 31 weeks,was an international bestseller and has been translated into 10 different languages.

Since being exposed to a death row inmate, Prejean has dedicated her time to educating citizens about the death penalty and counseling individual death row inmates, more specifically accompanying six men to their deaths.

The accounts with these six men lead to The Death of Innocents: An Eyewitness Account of Wrongful Executions, her second book, released in 2004.

Audrey McPartlin ’16 said, “She’s a really inspiring woman, leading the fight against the death penalty, an archaic and inhumane practice that continues to thrive in the United States, one of the few industrialized countries in the world that continues to use it in the law and practice.”

“Not only is she helping to redefine a religious or spiritual perspective on the issue, but she encourages love and empathy in people wherever she goes,” said McPartlin

Each year the college broadens its horizon with thought provoking speakers, who dedicate their lives to changing, and bettering the world we live in.

With Prejean’s past work with the Denison community, she will offer our community a fresh view on spirituality, the death penalty, and the poor of New Orleans, who she has worked so closely with.

All students attending graduation are strongly encouraged to delve deeper into her work by visiting her website, http://www.sisterhelen.org.