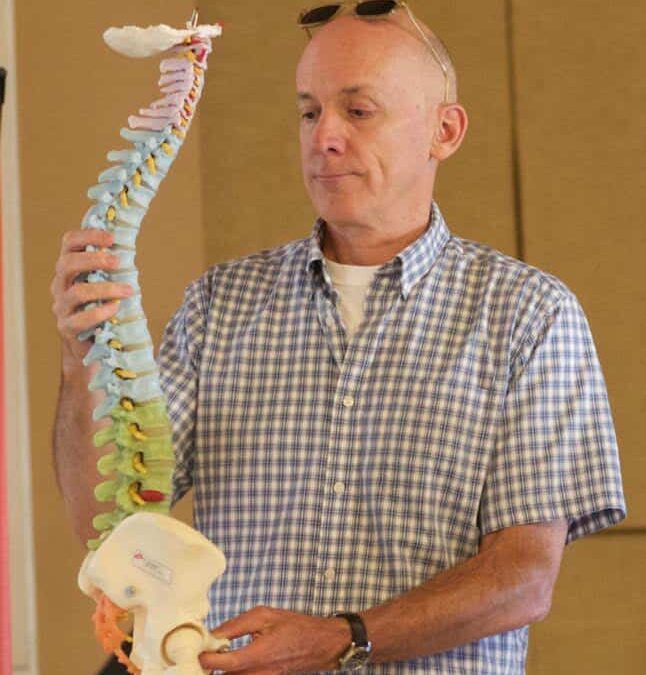 Upon entering the rehearsal room in Burke Hall, the site of the Alexander Technique Workshop, the pliable rubber models of bones and muscles scattered across the tables  at the front of the room made the space feel more like a high school anatomy classroom than a workplace for musicians.  But the key to becoming a better musician, David Nesmith, a music instructor at Denison and an Alexander Technique enthusiast, argues, is to have a better awareness of how the body works and to use that awareness to find balance and ease strain.

Part of that awareness means to not only be attentive to the body but to everything around it as well.

“Attention is not concentration,” Nesmith said.  “The first day we stopped being a happy, go-lucky toddler and went to school and sat in a chair, and were forced to look at the board, at the teacher, not out the window, that began the systematic distortion of our playful open-minded attention into a fixated, concentrated state.”

This concept was a bit complex at first.  What Nesmith said about the release of tension when stopping concentration – after all, how many people feel the strain in their backs and necks and eyes after concentrating too long – but it did not quite explain everything.  Finally, the question was raised: if we do not concentrate, how do we get anything done, especially when everything becomes a distraction?

Nesmith explained that, by definition, the only things that can be a distraction are those which were not already part of one’s awareness.  Acknowledging surroundings before and during a task, Nesmith says, helps to bring those things into awareness to where they no longer can distract.  This puts less strain on the body because one is not repressing or attempting to block out the possible distractions by simply concentrating on one thing, but is instead aware of everything in a balanced manner.

Certainly, it takes practice, and within the hour, as Nesmith instructed participants to play a few notes on their instruments, he could tell how quickly they had forgotten to acknowledge their surroundings and were only focusing on their instruments.

However, it became clear that the mind and body, when under any amount of strain, has an affect on the task performed.  Nesmith corrected misconceptions about the body and the way it moves, saying that the body map, or the image in the mind of how the body moves and functions, dictates action.  For example, if one incorrectly views in their mind that the spine is perfectly straight, rather than curved, then they will move in accordance to that and strain themselves to enact something which is not really how the body should move.

Nesmith’s images of how parts of the body interact also showed how small amounts of strain in one area of the body, the lumbar region, for instance, ultimately affect other regions which impact a musician’s performance.

Ultimately, the workshop was helpful in connecting the body and mind to daily activities, including those of a musician.  This applicability attracted several people from New Albany, Ohio, Newark, Ohio and even West Virginia.

Cathy Kleszczclinski from New Albany, Ohio, who’s been singing since she was four years old, said, “I found that as I’m getting older…I’m having a more difficult time relaxing and opening…and my vocal instrument is getting softer…My friends who’ve done the Alexander Technique…they say that’s a way to find relaxation and bring out your fullest voice.”

Though Clem Pearson ‘19 may not have the same amount of experience as Kleszczclinski, he had known about the Alexander Technique and had been pushed for years by his mother, who is a massage therapist, to try out the workshop.  Denison’s offering of the workshop was the perfect opportunity.

“It’s very interesting,” Pearson said.  “All the body awareness stuff, I don’t think about it…I don’t allow myself to, I guess…This is good stuff.”

For musicians and non-musicians, the Alexander Technique Workshop applied concepts of attention and balance into the practice of whatever passions one might have – music, athletics, art, public speaking, etc.  These passions all require a healthy, functioning and balanced mind and body.  The Alexander Technique Workshop on Saturday, Sept. 17 gave participants a chance to take a step in that direction.