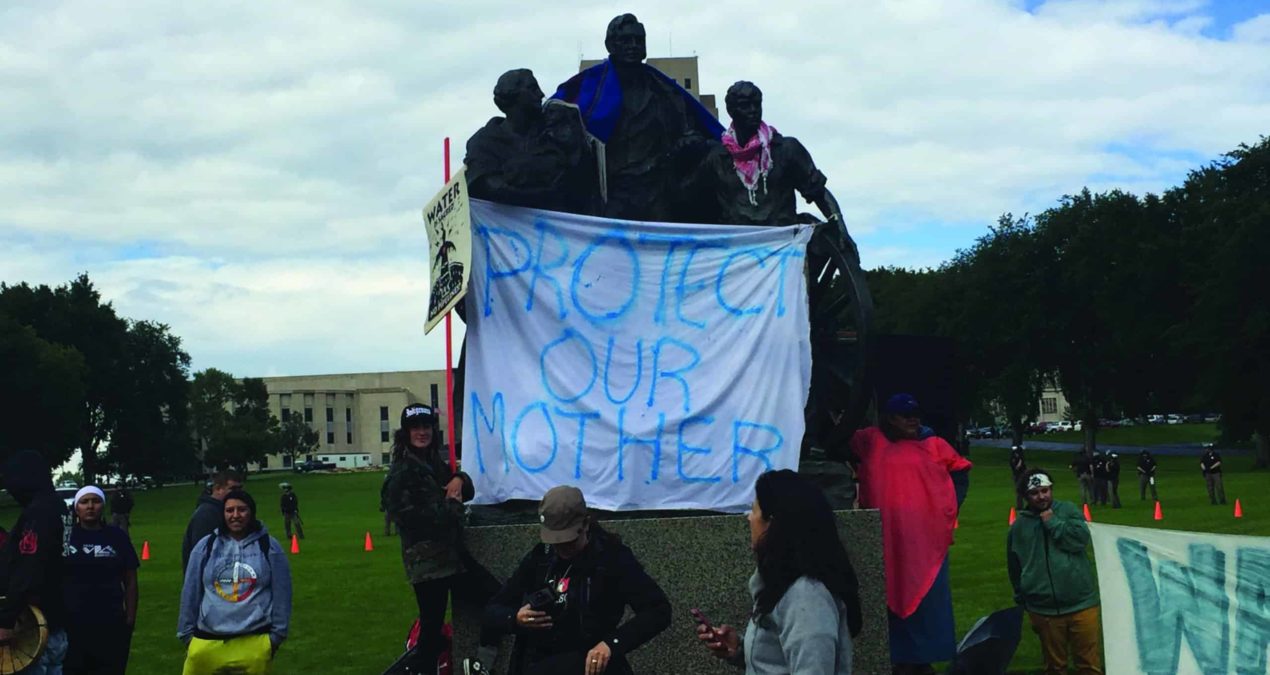 Action against the construction of the Dakota Access Pipeline started in April on Ladonna Allard’s land in North Dakota. From the start, those who gathered wanted to be known as water protectors, not protesters.

Originally called Sacred Stone Camp, the encampment on Allard’s land aimed to block the progress of the pipeline. Peaceful protectors, including Elizabeth Castle, a women’s and gender studies and international studies professor at Denison, gather at the main camp every day in solidarity.

The pipeline is slated to pass beneath the Missouri River, half a mile upstream of the Standing Rock Sioux reservation boundary, after its placement near the city of Bismarck was politically unpopular. Despite the risk of contaminating water that supports 18 million people (according to the National Park Service) and disrupting sacred sites, the final environmental assessment by the USACE concluded that no direct or indirect impacts will occur.

While protests initiated in April, the issue of the pipeline dates back to Feb. 2015 when the project was initially proposed. According to a timeline constructed by the Huffington Post, The US Army Corps of Engineers (USACE), a federal government agency in charge of the nation’s waterways, sent a letter to the Tribal Historic Preservation Office (THPO) to initiate a permit process.

The Corps is required to consult with the tribes affected on the pipeline’s potential impact due to the National Historic Preservation Act of 1966. The THPO responded several times to the USACE to request an archeological investigation, but their letter allegedly went unnoticed.

According to the Standing Rock Sioux’s lawsuit, another letter from the USACE arrived in Sept. 2015 asking again if the Tribal Chairman would like to consult on the pipeline. The THPO replied again, emphasizing their concerns about the project on the site and its exclusion from the National Historic Preservation Act process.

Despite the concerns of tribal members, the USACE concluded its investigation in April 2016 citing that no historic sites would be affected. Finally, in July 2016, the USACE issued a permit needed to continue pipeline construction across the four states in question: North Dakota, South Dakota, Iowa and Illinois.

Tired of being ignored, Chairman of the Standing Rock Sioux Dave Archambault made a call to action, bringing thousands of supporters to the expanded camp known as the Oceti Sakowin ( “People of the Seven Council Fires” which is the proper name for the Great Sioux Nation). The movement continues to grow with the number of protesters now reaching 4,500-5000 during the week and 6,000-7,000 during the weekends.

Oceti Sakowin resides about 100 acres adjacent to the original Sacred Stone camp. The move was made because, with the growth in numbers, Sacred Stone was largely inaccessible.

Oceti Sakowin has since become a small city with a network of roads, an established security system, multiple kitchens providing free food to all, a prolific horse population and a school staffed by accredited teachers.

The camp is physically broken down into several parts with people from all corners of the nation and beyond, but the community remains incredibly undivided, according to Castle. “Unlike other spaces you go into where everyone’s divided, everyone just steps up and thanks each other for being there…  everyone wants to be there to protect the water,” Castle said.

Castle was fortunate enough to stay there for five days. “It was the most life changing experience I’ve ever had…it was incredible to be in a space run by women talking about protecting the earth in the most powerful and respectful way,” she continued. Castle has been writing, researching and filming native activism for the last 15 years.

According to Castle, women are running the show at Oceti Sakowin. Leaders Madonna Thunder Hawk and Phyllis Young among other women are largely responsible for maintaining organization and planning. “As a historian of Native women’s activism, I learned early on the way leadership in indigenous community works – mainstream society has a hard time understanding that the man with the microphone isn’t the one in charge but has been advised by the elder women to represent the will of the people. I got to see this happen in real time and years of work just crystallized for me, it was amazing to live in a community run by the wisdom of women.”

Protectors continue to face resistance from the company daily. On Sept. 6. only hours after the legal team for the Standing Rock Sioux Tribe submitted evidence in federal court documenting how the Dakota Access Pipeline route would go through a sacred burial site, the company began working on that very site. Bulldozers cleared the burial site while hundreds of Native Americans from different tribes rushed to the site to protect it (According to Democracy Now). In response, the company’s private security forces attacked the Native Americans and allies with dogs and mace.

At the same moment this decision was passed down, President Obama called on the Justice Department, and the US Army to halt the construction of the pipeline. However, all this did was halt immediate construction under the waterway. The rest of the construction crew is still continuing their work.

The community at Oceti Sakowin plans to stay on the land at least until January 1. Because of this, the protectors need to begin planning for the winter months. Dallas Goldtooth, a spokesperson for the Indigenous Environmental Network, provides consistent updates on what is going on in the camp and what supplies protectors need. In his latest post he requested raincoats, blankets and rain boots. Goldtooth also stated that he was looking into ways to purchase wind generators to keep the camp green.

To help the protectors, supporters can donate supplies and/or funds to the following site: http://standingrock.org/news/standing-rock-sioux-tribe–dakota-access-pipeline-donation-fund/ You can specify where you want your funds to go through this link.