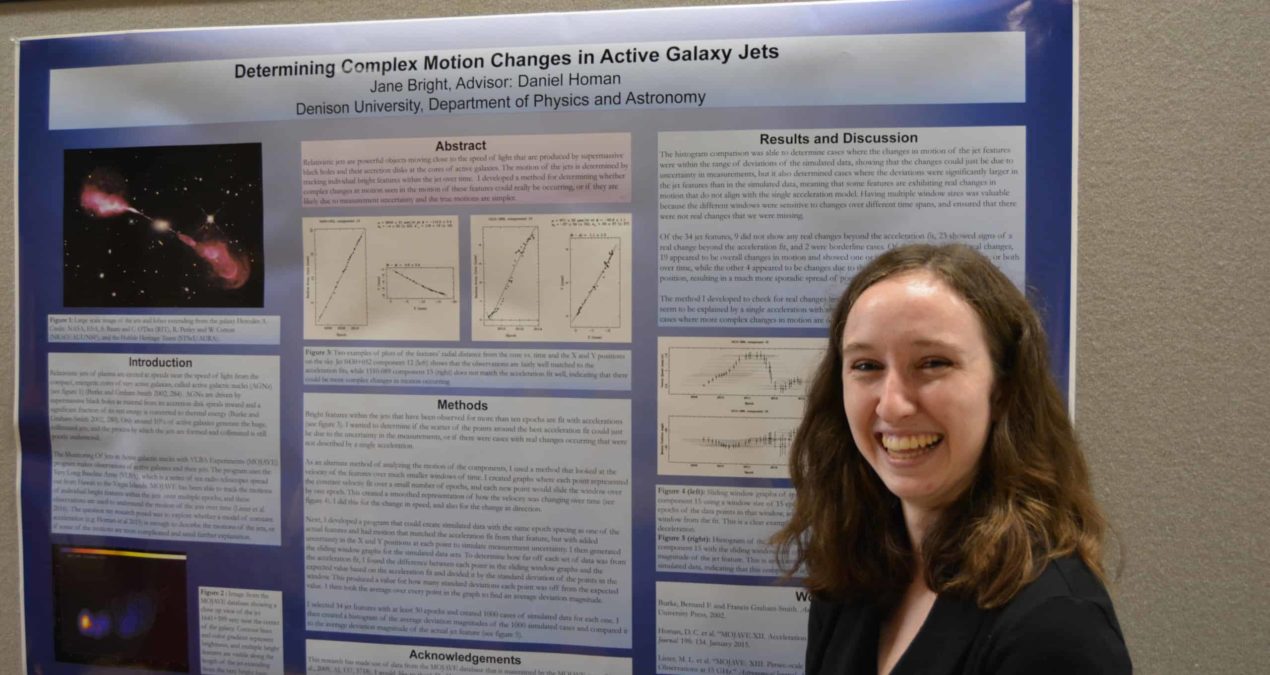 Denison students who spent their summers on campus performing original research in the sciences were recognized and answered questions about their research on Thursday at a poster session held in the Provost’s Dining Room.

Students were given the chance to show off and explain their research to other students and staff at the interactive event, during which many students presented their findings to small groups clustered between the rows of posters in the room.

Jane Bright ‘18 chose to research active galaxy jets, which are composed of material being shot from very powerful galaxies.

“The motions of the jets are tracked by looking at individual bright features within the jets,” Bright said. “I wanted to determine what part of the acceleration data was just due to measurement uncertainty and what represented a real change in the acceleration.”

Other presentations included topics such as conditionality, liquid crystals, memory, lasers, and insects.

“Liquid crystals are a sub-class of semiconductors,” Michelle Hill ‘17 said. “They could be a low-cost effective way of energy production.”

Hill’s research involved attempting to determine the structure of the liquid crystals using XRD analysis to find the spacing between molecules.

In an experiment in the Biological Reserve, Philip Hurst ‘18 worked green frog tadpoles and tried to determine the impact of different kinds of leaf litter on the developing tadpoles. Using mesocosm pools (a simulated environment designed to mimic a natural one), Hurst filled each with a different type of leaf litter and measured the impact on the frog morphology.

“I originally thought that invasive species would hinder the frogs the most,” said Hurst, “but I found out that wasn’t the case.”

Tyler Miller ‘17 and Charlie Hoffman ‘18 traveled to Sequoia National Park in Sierra Nevada, Calif. to determine a connection between two granitic plutons (a relatively small intrusive body that seems to represent one fossilized magma chamber, according the University of Pittsburgh Dept. of Geology and Planetary Science) that are turned vertical rather than horizontal (as is typical). The two were trying to use uranium-lead dating to date the Spring Lake Granadiorite in order to understand the placement and deformation history of the area.