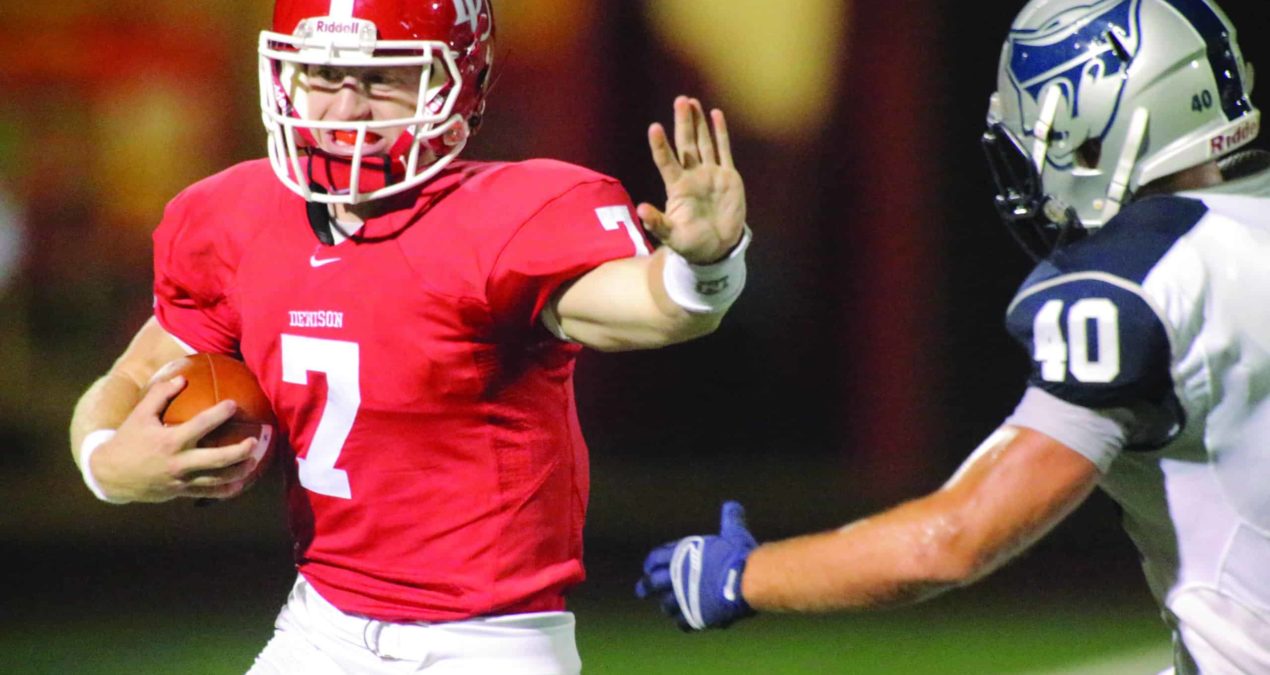 Despite opening the season on the road, the Big Red Football Team did not disappoint Coach Hatem and the rest of the Denison fans who traveled to Marietta on Saturday night. Under the lights, Denison got their first W with a 34-21 win over the Pioneers

Fans speculated a shutout as the Big Red led 20-0 early in the fourth, but in the final 15 minutes the pace of the game quickly changed.

The Marietta Pioneers managed to get on the scoreboard after closing out a 73-yard drive within the first few minutes of the final quarter.  Stopping the Pioneers momentum, Joel Lohoua, senior captain, scampered for an 87- yard touchdown on the ensuing kickoff. Lohoua, who starts as a cornerback, ran in his first collegiate touchdown as a kick-returner Saturday night, making the score 27-7.

Lohoua said he felt more than comfortable as starting returner. “This was my first game starting as a returner alongside my usual position at corner, it gave me the opportunity to contribute in a way that I haven’t been able to before. I think this play really gave my team the momentum to finish the game on top.”

The Pioneers, however, had not given up yet. They came right back on the next drive, scoring once again, this time on a double pass trick play, trimming the Big Red’s lead to 13.

Denison offense fumbled on the following drive, quickly returning possession to the Pioneers on their own 42-yard line. Once again, Marietta found a hole in the Denison defense, scoring on a goal line run to make the score 27-21.

Looking to make up for their last turnover, the Denison offense behind running back Cody Farley rushed for one final touchdown from 8-yards out, ending the Pioneers chance of a comeback. Sophomore Cody Farley finished the game with a career-high after rushing 170 yards on 25 carries.

Senior safety Andrew Baird helped to hold off the Marietta Pioneers, leading the defense with 9 tackles.

When asked how Saturday night’s win helped set the tone for the rest of the season, Coach Hatem said he was looking forward to yet another big season with The Big Red: “Our team achieved a hard fought victory on the road against a strong Marietta College team Saturday evening. I am sure that the teamwork that was necessary to achieve this victory will serve us well in the upcoming NCAC season.

Next Saturday Denison has its bye week for the season. The next match-up for the Big Red will be Saturday September 17 against the Yeomen of Oberlin.