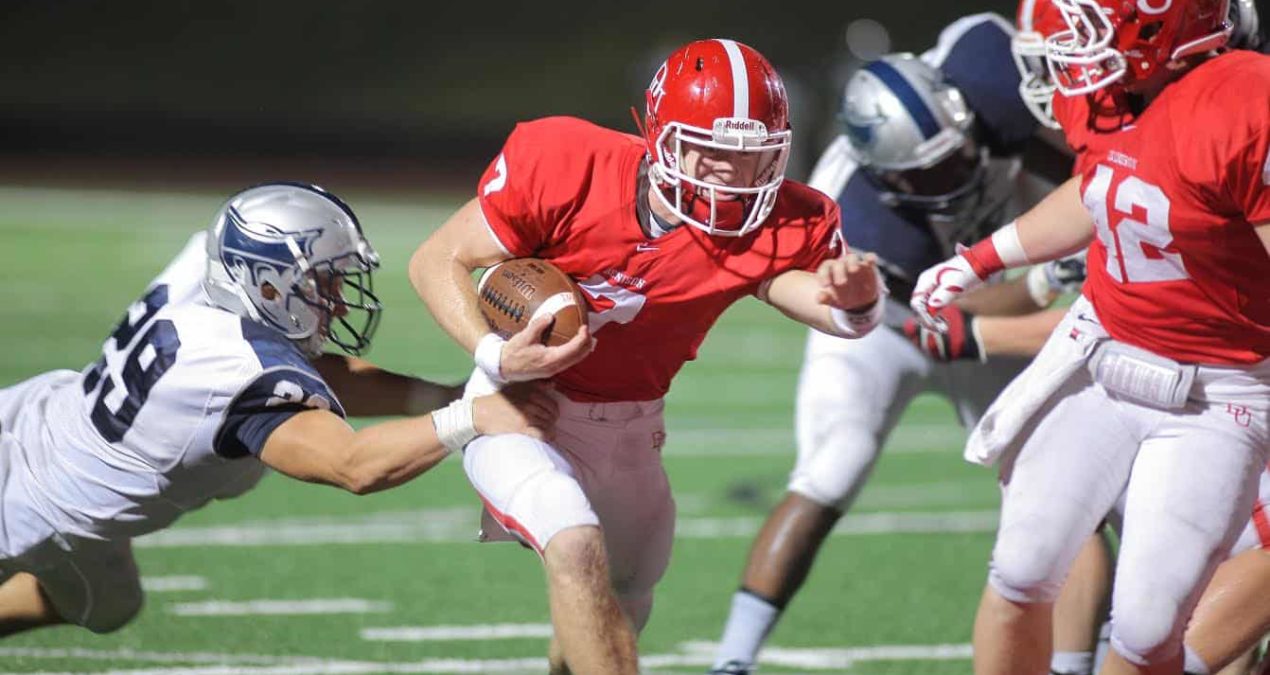 Coming off of a bye week, Denison crushed the Oberlin Yeomen, 54-7.

The defense worked as a unit, holding Oberlin to just 45 passing yards and nine first downs.  Between eight tackles for loss, four sacks and two interceptions of Oberlin quarterback Zach Taylor, the “Big Red Swarm” made highlight after highlight.  Nine Yeomen possessions ended with fewer than four plays.  Three of those saw Oberlin lose yardage before being forced to punt.

Hayden Hatten ‘20, put together an impressive performance with seven solo tackles, two sacks, a blocked punt and a forced fumble.

“The coaches put together a really good game plan defensively and we had really good preparation during the week.” Anthony Sernus ‘17, one of the team’s captains, said. “It resulted in good team defense.”

Not to be outdone, the offense worked hard to post 54 points.  Denison went into the locker room with a 33-0 lead and only added to it after halftime.  Every offensive possession in both the first and third quarters ended in a score.

Canaan Gebele ‘19 picked up 224 yards in the air and another 135 on the ground, headlined by a 75-yard touchdown run.  That run was one of three times Gebele scrambled for a score.

Gebele’s favorite target, David Weimar ‘19, caught nine passes for 149 yards and a touchdown.  It is the 13th-most single-game receiving yards in program history.

The sophomore quarterback was able to run free and had plenty of time on pass attempts due to phenomenal play by the offensive line, which did not allow a sack.  It was practically a 7-on-7 drill for Gebele.

“I think that the offensive line has grown up a lot since last year, and we will continue to prove that every game this season.” left tackle and team captain Drew Gray ‘17 said. “Zero sacks should be a normality now.”

The Big Red also weren’t afraid to turn to kicker Conor Dunn ‘17, who made four field goals and all six extra point attempts.  He was not expecting this many opportunities to split the uprights.

“The more the merrier,” Dunn said. “My leg is a little sore but overall I feel good.”

Overall, Denison gained 559 yards, converting on 10-of-17 third downs and possessing the ball for nearly two-thirds of the game.

The Big Red open the home schedule on Big Red Weekend, when they host Wooster at 1 p.m. on Sept. 24.

Denison athletes before the season