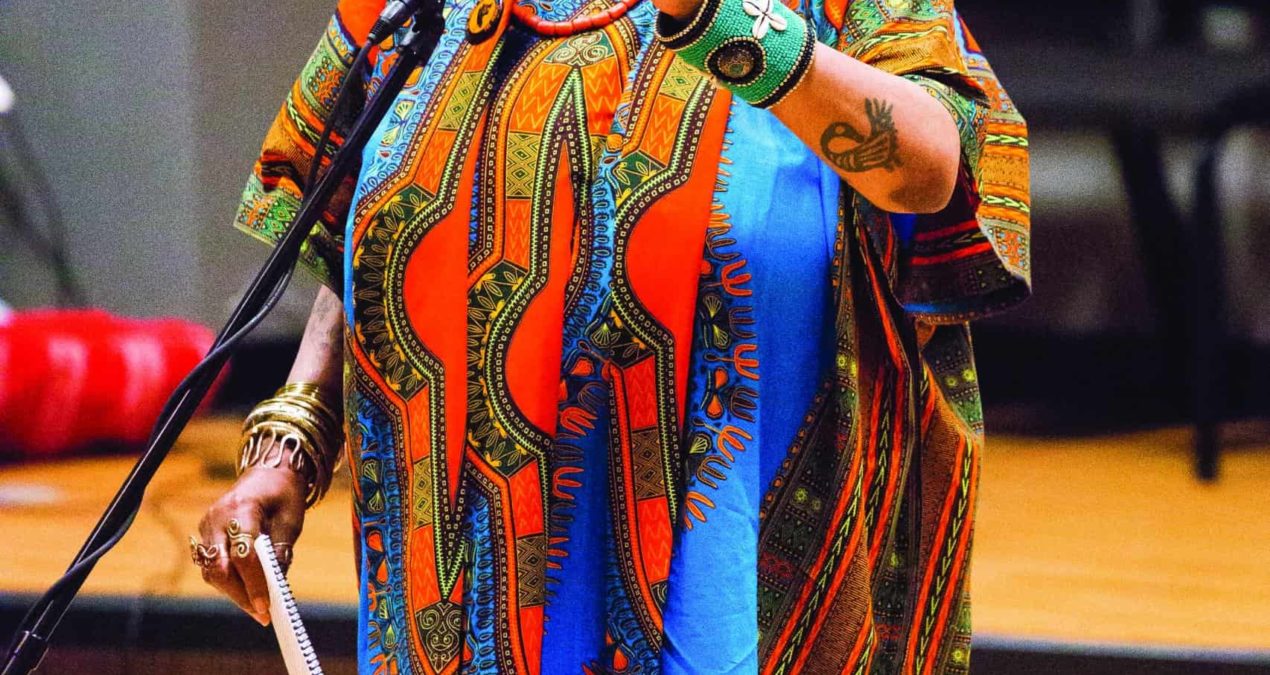 She’s sweet. She’s loving. She’s Mama C! Charlotte O’Neal, a former Black Panther made an appearance on Wednesday to speak about her life experiences and perform for the Denison community.

Many students gathered in Knapp Performance Lab to hear her speak.

She donned a colorful dashiki that you couldn’t take your eyes off of,  body jewelry that covered her arms and feet and topped it all off with a wooden headband. She truly came in dressed to the nines. What amazed the crowd, however, was how passionate she was about her culture.

Her presentation began with a song. She had the audience sing along to her lyrics, which allowed the crowd to connect with her on personal level. She recited poems while playing her nyatiti, a classical stringed instrument. O’Neal’s lyrics consisted of beliefs and values that stemmed from her Tanzanian culture.

Mama C did not have an easy life and faced many obstacles. Her husband was exiled and they were forced to flee the country back to Tanzania, where she spent a good amount of her life. The people in tanzania were supportive of her involvement in the Black Panther party. As a Black Panther, she explained that they worked together as a family. It did not matter what race you were, you were there to support one another.  This is what made the Black Panther party bond so strong.

When asked about misconceptions of the Black Panther party, she explained that during her time as a member, the group was labeled “racist” and “gun wielding maniacs.” She explained that the news media portrayed the Black Panthers as villains, thus promoting racism and contributing to the racial divide at that time. What she wanted to get across was that community service was the focal point of the organization; feeding children, clothing people, educating people. She was genuine with every word she spoke.

Mama C still carries the Black Panther party’s values in her heart and encourages solidarity among all people. She believes everyone is her brother and sister whether you are white, black, Asian or any other ethnic background.  With her accomplishments of publishing a book called Warrior Women of Peace in 2008, which the Denison student body is encouraged to read. She has also been apart of documentaries alongside her husband, and directed and participated in music videos with east African artist. Mama C has done it all.

Overall, her presentation was one that will stick with you. She ended off with a piece of advice, saying “Don’t let the oppression take away your joy… In the midst of fighting back we must experience joy. Joy is a form resistance.”

She left the audience with amazing life advice, and whether someone was there out of curiosity or for an extra credit assignment, they were bound to take away a message from her. That’s how fabulous Mama C is!

Denison Bluegrass opens for yet another band

James Clear ‘08 creates his own future