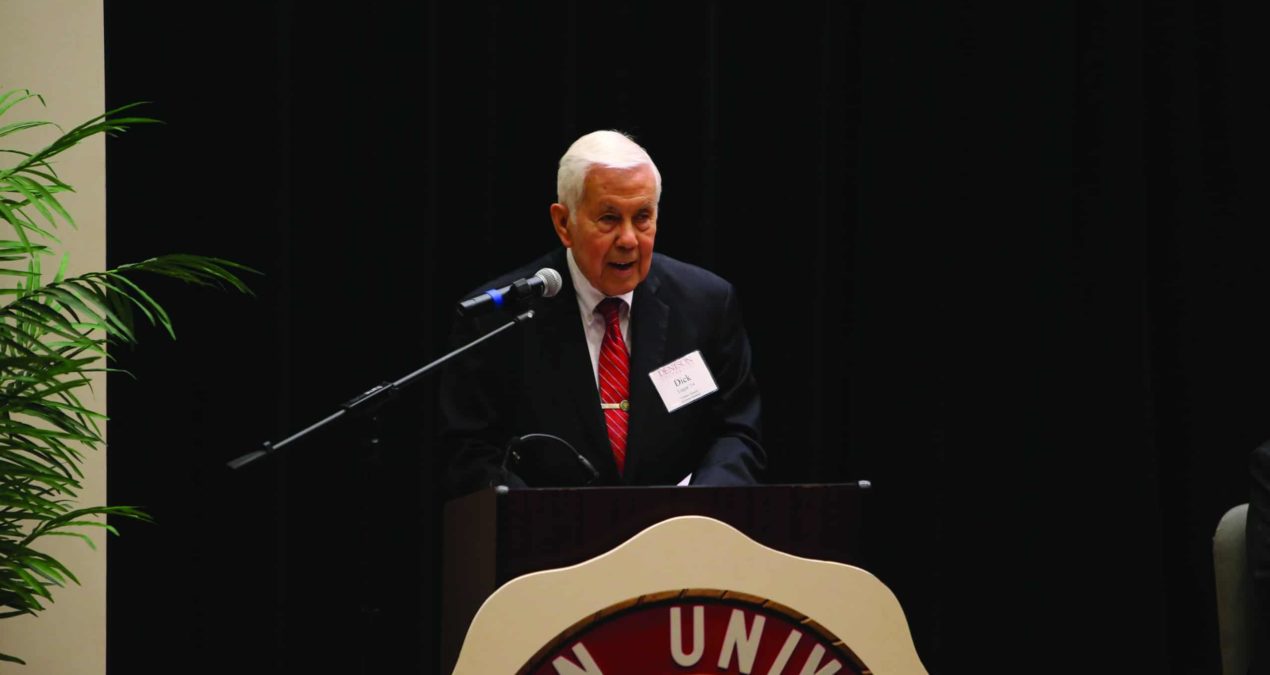 US Senator advocates for agreement and cooperation

When Senator Richard Lugar ‘54 was attending Shortridge High School in Indiana, the school’s basketball team had a drinking problem. Lugar, then a columnist for the Shortridge Daily Echo, wrote a piece about the conduct problem.

“I indicated that it was time for reform on the basketball team,” Lugar said.

The column was sensational enough to generate concern from the principal, who was worried about the message it might send to the school board about the principal’s leadership. Lugar’s desire to tell the story also stirred up controversy in the student body, understandably causing his popularity to drop.

“Somehow we lived through the crisis, but sometimes your words do have impact for other people, and a broader audience,” Lugar said of the incident.

Perhaps the impact of those particular words was that Lugar, who was elected to six consecutive terms in the United States Senate, did not win the election for president of the junior class, nor was he elected president of the senior class the following year.

Lugar said that he used the opportunity to learn how to bring people together. One of Lugar’s notable points of legacy was his willingness to cooperate and produce solutions in the Senate, instead of forcing gridlock, which is all too common with idealogs in today’s congress.

“I suppose as I grew into being mayor of Indianapolis, and later the United States Senate, there were issues more important to me than writing a newspaper column or shouting out on a particular issue every week,” Lugar said.

Finding ways to agree, rather than taking the strongly worded editorial opinion, turns to be a much more effective force in the way of civil advancement.

Perhaps Lugar’s first major stride for such cooperation occurred during his tenure as mayor of Indianapolis. His goal was to unite the city, at that time a sprawling conglomerate of outlying towns, into one great city under one budget. This required a great deal of support from the state’s legislature – a venture that necessitated much support from both sides of the aisle.

In 1967, when Lugar was elected mayor, cities like Detroit, Cleveland and St. Louis were falling apart and suffering as a result of becoming increasingly de-centralized.

“I was struck by that as a young mayor. That’s where I learned how to forward controversial policies through the use of naming more good reasons to get people to emotionally grasp the same things that I had to deal with, and [get them to] find in their interest, which I did. Indianapolis thrived, became a great city, and is still on the move. This would not have been achieved if I had simply been shouting out like a member of congress now,” Lugar said.

During his 36 years of service in the US Senate, Lugar says he prided himself on problem solving and working to create solutions with allies on both sides of the aisle.

“I believe that I always had a reputation of someone who you could work with. That we could think through problems and arrive with a co-sponsorship. Or, as one who advocated a certain bill, either one I had written or was seeking co-sponsorship, [I felt] that I could make an appeal to the reason of another senator, if they were going to put their name on [the bill],” Lugar said.

“Obviously if I had approached this from the standpoint that you’re dead wrong, or you don’t know what you’re talking about, it would not have been an appealing way to achieve co-sponsorship or pass legislation through committee on the floor,” Lugar said.

Four years ago, Lugar founded The Lugar Center. The center advocates for issues like global food security, WMD nonproliferation, as well as bipartisan governance. The center has also developed the Bipartisan Index, which rates all 100 members of the Senate and 435 members of the House on their willingness to co-sponsor legislation from across the aisle.

What they found was, that in the last 20 years, congress has become increasingly polarized, with the least bipartisan bill sponsorships occurring in the last four years.

At the bottom of the list for the Democrats and Republicans in terms of bipartisanship were Bernie Sanders and Ted Cruz, both close seconds in their party’s primaries.

Lugar explained why he thought that so much political polarization has occurred in this year’s presidential campaigns.

“So often [polarized voters] don’t have a whole host of specific views on foreign policy or domestic issues. It’s rather an emotional feeling. But someone who comes along and says ‘I’m gonna sock it to ‘em’ has an appeal [to them] without knowing exactly how this candidate is going to shake up the order,” said Lugar.

Students dress up for the Cherry Blossom Festival