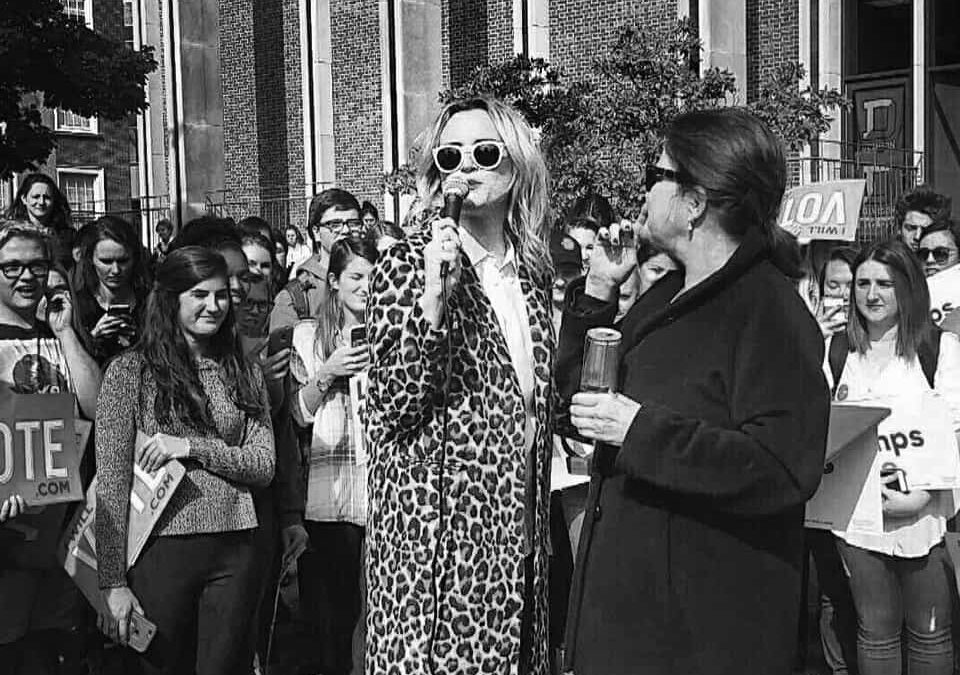 With the 2016 Presidential election becoming one for the history books, many celebrities are urging college students to vote, including Taylor Schilling and Kate Mulgrew from the Netflix original series Orange is the New Black.

Schilling and Mulgrew are on a college tour to encourage young voters to support Democratic Nominee Hillary Clinton. The two made their way to Denison last Friday as one of the stops on their tour.

Although brief, the two actresses got right to the point of their speech. They encouraged the crowd to vote for Secretary Clinton as they feel she is the only real option this election.

Some questions from the crowd created discussions about Hillary’s support of the LGBTQ community and her views on private prisons.

“What we see is that he [Trump] wants to pull our government out of most everything, and a prison that is not run and subsidized is very dangerous,” Schilling said on the privatization of prisons.

“Trump would privatize his bathroom if he could,” Mulgrew added with laughter.

On Orange is the New Black, Schilling and Mulgrew portray prisoners Piper and Red, respectively. Through the seasons, the show has tackled many important topics, such as police brutality. The actors are taking to the real world to raise awareness and explain how Clinton is the best candidate to handle each situation.

Schilling and Mulgrew were vibrant and friendly as they treated each listener as if she was the only one in the crowd. The two even stayed a few minutes after the rally for autographs, pictures, and an interview.

The co-stars, who stated that they have been friends for about ten years, shared many similar views.

“[The most important issue is] human rights. If I was you, as a millennial, I would think about gun control, climate control, and student debt, all of which Secretary Clinton is going to take care of determinately and succinctly. She has her policies in place like nobody’s business and you are going to be the happy beneficiary.”

Schilling had a similar viewpoint, and also stressed the importance of young voters registering and going to the polls on November 8th.

“This is a time where we do not have the privilege to be indifferent and every vote, every person counts. No matter what your previous political leanings were, there is only one candidate that has the experience, the wisdom, and the temperament that can lead us back together.”

Because Orange is the New Black deals with such relevant topics, Schilling and Mulgrew do not shy away from discussing the problems this nation faces.

“Privileged,” Mulgrew responded when asked how she felt portraying such scenes. “Jenji Kohan is unlike any other creative mind in television today and Netflix has given her, her head and this is one crazy pony that we’re riding and we’re all delighted to be on this ride. It’s terrific.”

“I am really proud that the show tackles such important political issues and it weighs on me because it is difficult to shoot yet inspiring,” Schilling added.

Although their appearance happened during class hours, the arrival of the stars drew a heavy crowd, with many eager students.

“This was a once in a lifetime chance I think,” Brooke Schuler ‘20 said. “I love their show and I was so inspired by what they said because it really makes you think how important your vote is in this election.”

Schilling and Mulgrew continue to travel to universities and colleges to speak to thousands of students as election day starts to approach.