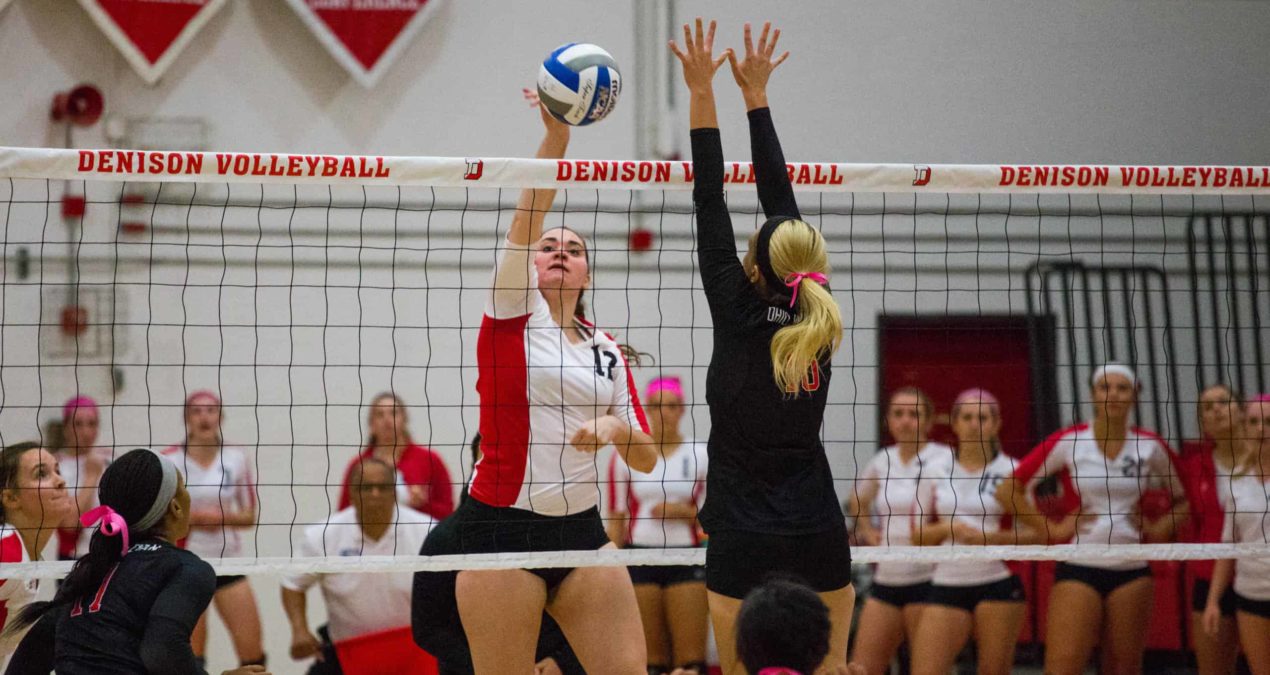 Volleyball team wins one, loses one, in conference games

Denison volleyball closes out another week, and the team went through a roller coaster of games as they played two conference teams.

Denison first took on Ohio Wesleyan in a home game last Wednesday. The teams fought a very even battle as the game went into five sets. It was a very back and forth match; when one team won a set, the other team would rally and win the next.

The scores were close and Denison never gave up, but unfortunately the Big Red fell short against the Battling Bishops. Having lost by a few points in the final set, Denison decided to take action and be prepared for the next game.

“The OWU game was definitely a more frustrating one, to say the least, since we had them in the 4th set and went on to lose in 5, but I think our team learned a lot from that game,” Leah Reinfranck ‘18 said.

The team travelled to Allegheny on Saturday to play another conference game, but with a much different outcome. Denison Volleyball started with a bang, winning the first two sets to beat the Gators 3-1.

Allegheny did not let Denison win easily, as the first two sets came down to a four point or less win and the Gators won the third set.

However, Denison made it clear in the fourth and final set that this was their game to win, as they won the set 25-9.

“So obviously we won against Allegheny, so I’m happy about that, but we played pretty slowly throughout the game up until the fourth set, when we turned it around and were successful in all aspects of the game,” Reinfranck continued.

In terms of the season, the volleyball team is has a 9-13 record and a 2-3 record within the conference. However, the team continues to push forward with two weeks of the regular season left.

“This week, our setters did a great job moving the ball around to create one-on-one block situations for our hitters. Our team’s serves were also really good,” Reinfranck explained.

“Things we need to continue to work on as a team are our consistency in finishing matches and remembering to communicate constantly with each other when on the court.”

With four games to play, three of which are against conference teams, Denison Volleyball has to kick it into gear before the NCAC tournament in November.

“It was the best we’ve played against OWU since I’ve been here, so it’s nice to know that we can beat them and hopefully we’ll get the chance to in the conference tournament in a few weeks.”

The next two games are home at Mitchell. If you are staying on campus for fall break, come out and support the Big Red Volleyball Team as they are up against Wooster at 7 p.m. on Wednesday and DePauw at 1 p.m. on Saturday.