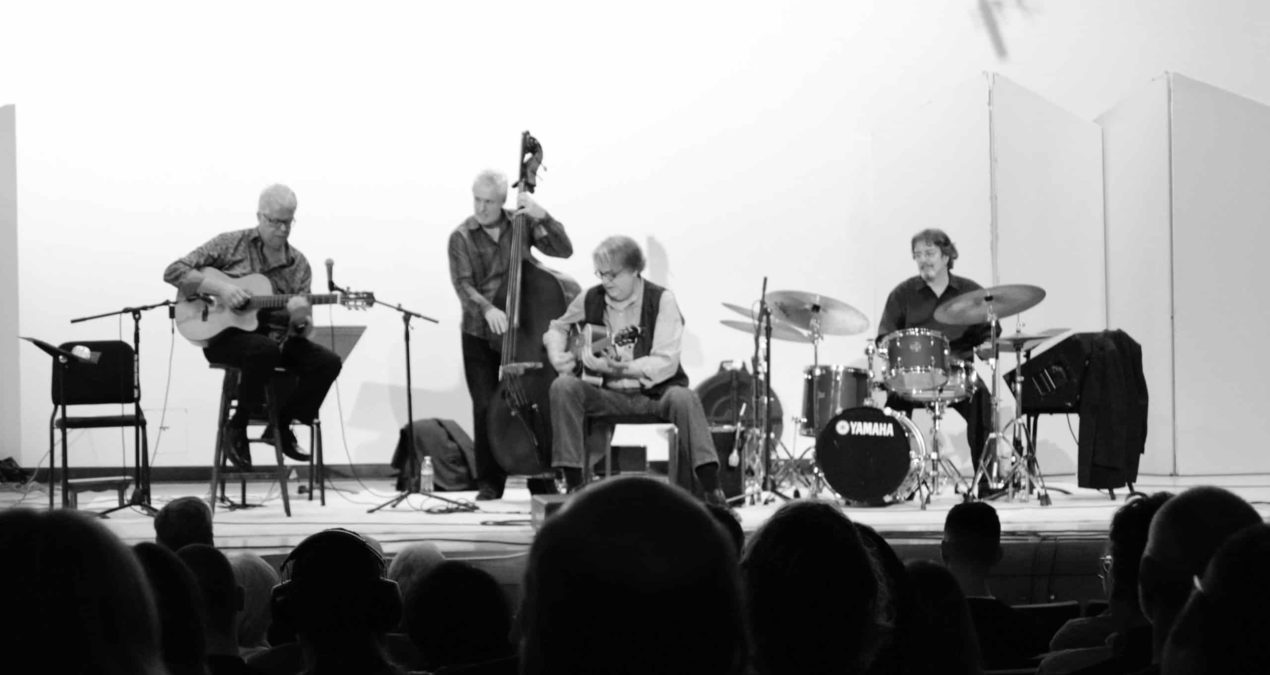 When the band Trio da Paz took the stage in Burke Recital Hall on the second night of the event, the excitement was at its peak in anticipation of the finale of an already wonderful weekend of music.  The night before, guitarists from all over the world had come to perform.  Just as varied were the guests who, according to Tom Carroll, a former Denison professor who just retired this year, come from all over central Ohio and sometimes even farther to hear these talented musicians.

Trio da Paz, a jazz band from Brazil, began the night with an upbeat tune which brought back memories of summer with its Latin rhythms and carefree sound.  The band members were relaxed and almost seemed to be transported to another place where it was just the three of them together.  It came as no surprise that these men had been playing together for thirty years, as they seemed totally at ease with one another and worked well together.

The second song stood out from the rest. Although it was a guitar festival, the bass is what really attracted attention during this song.  Bass player Nilson Matta started the song with a solo, and the low notes together formed a more mature, serious tone that was really beautiful.  But then drummist Duduka da Fonseca and guitarist Romero Lombaro joined in all of a sudden, kicking things up a notch and bringing in fun, upbeat rhythms.

One of the most fun aspects of the night, however, was the inventive way each musician found new ways of playing their instruments.  At one point, Lombaro slid his hand down the neck of the guitar really quickly, making a high pitched “zip!” sound, while at another point da Fonseca used brush drumsticks with a stirring motion over the top of a drum to produce a rolling sort of scratching noise.

Da Fonseca also entertained the audience with an original song based off his oldest daughter’s temper.  The song included several varying types of rhythms, da Fonseca explained, to which Lombaro exclaimed, “Basically, pray for us!”

Indeed, the song was quite complicated, but always returned to the same basic rhythm, just sped up a little bit or changed ever so slightly, which kept audience members bobbing in their seats along with the familiar rhythms.  The guitar felt sort of sassy, fitting perfectly with da Fonseca’s description of the daughter’s flaring temper, and which became intensified against the ever-increasing volume of the drums and bass.

Certainly, the songs with former professor Tom Carroll brought out a lot of sentiment and respect from the band members who applauded Carroll as a teacher, musician and human being.  In his performance alongside Trio da Paz and in the finale with other renowned guitarists who’d performed over the course of the weekend, Carroll was viewed as a well-respected and admired man, especially in his efforts alongside the Vail Series and Campus Leadership and Involvement to host this event at Denison year after year.

In a grand finale, the other performers set up on stage and performed together, sometimes all at once, and at other times in a sort of rotation in which the variety in their performing styles was showed most evidently.  Some plucked the strings sort of delicately, while others were extravagant in their arm motions, or in the tapping of their feet and swinging head.  The variety was a testament to how exciting and continually evolving the jazz genre is.

The event is a highly anticipated one, as many people show up year to year, including Chris Wilkins ’94 who has returned nearly every year in support of the work Tom Carroll has done to put on this program.

“I knew Tom from being around the area,” Wilkins said.  “I come here as often as I can just to hear him and do the hotlicks thing he does in September…he’s phenomenal. He’s a family a guy, and he’s a down-to-earth, humble man…I don’t know what’s gonna happen now since he’s retired…I hope it goes on…it’s a blast.”

The festival is currently the longest running jazz guitar festival in America, and because it brings so many talented musicians together, it is something to look forward to each year.  This year’s performances were spectacular, as each guitarist showed a new facet of jazz that continually renewed the atmosphere of the place, almost reinventing the genre at times.