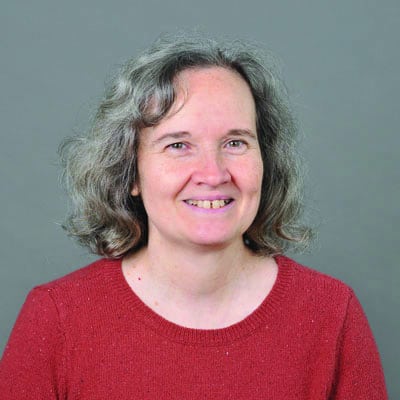 Imagine hiking through tall, rocky peaks, passing waterfalls and steep rock faces, all while in the middle of a desert devoid of any green plant life.

“It was so different. It was almost like we were on another planet… it was beautiful,” said Debby Andreadis, the Deputy Library Director of Doane Library.

This is the scene that she painted as her most memorable hiking experience- her family trip to Kgalagadi Transfrontier Park, which lies on the border of South Africa and Botswana. Andreadis is an outdoor enthusiast, and it’s part of the reason she now works at Doane.

Andreadis, 53, grew up in Shandon, Ohio, a town outside of Cincinnati. From there, she acquired her undergraduate degree in Zoology from Ohio State University, and went on to get two masters degrees in Ecology and Information Sciences from the University of Tennessee.

After graduation from Ohio State, Andreadis found a job working in a lab doing DNA research. During this time, she felt the need to go back to school at the University of Tennessee.

After acquiring both of her master’s degrees, she found a job opening at Denison in 2001 for a science liaison. She was the first liaison for a program that Denison introduced to create a better library experience for students. Denison hired her for the position, and she has been there ever since.

“When I first came here, I didn’t expect to be here this long,” she said. “Coming here and seeing the amount of interaction with the faculty that the students get here really struck me as, ‘Wow, this is great’.”

Andreadis is currently working on a project called Digital Commons, in which she moves Denison collections into an online forum where students can access information over the internet.

In addition to this project, she also works one on one with students doing reference interviews, in which she gains an understanding of an individual’s research needs and helps to guide them in the proper direction.

When she is not at Denison, you are likely to find her at local hiking spots such as Blackhand Gorge or Hocking Hills State park, or spending time with her husband Paul and daughter Kassie, and her sisters Alice and Tina. She is a rock music enthusiast, and enjoys both reading and playing video games in her time away from campus.

Andreadis is an avid traveler- she recently went out west with her two sisters to hike and camp. She has taken trips to South Africa, Vancouver and two trips to Australia, once to Adelaide and the other to Sydney. During her trip to Australia she made the trip up the east coast from Sydney to Brisbane, where she took a catamaran into the Pacific Ocean and snorkeled in the Great Barrier Reef.

While she loves the world outside of Denison, the school also carries a special place for her.

“Denison is a great place to work,” she said. “I really like the direction that Denison is going with the educational programs. People here are really interested in the students and are really concerned about what is going on in their lives. It really is a community.”