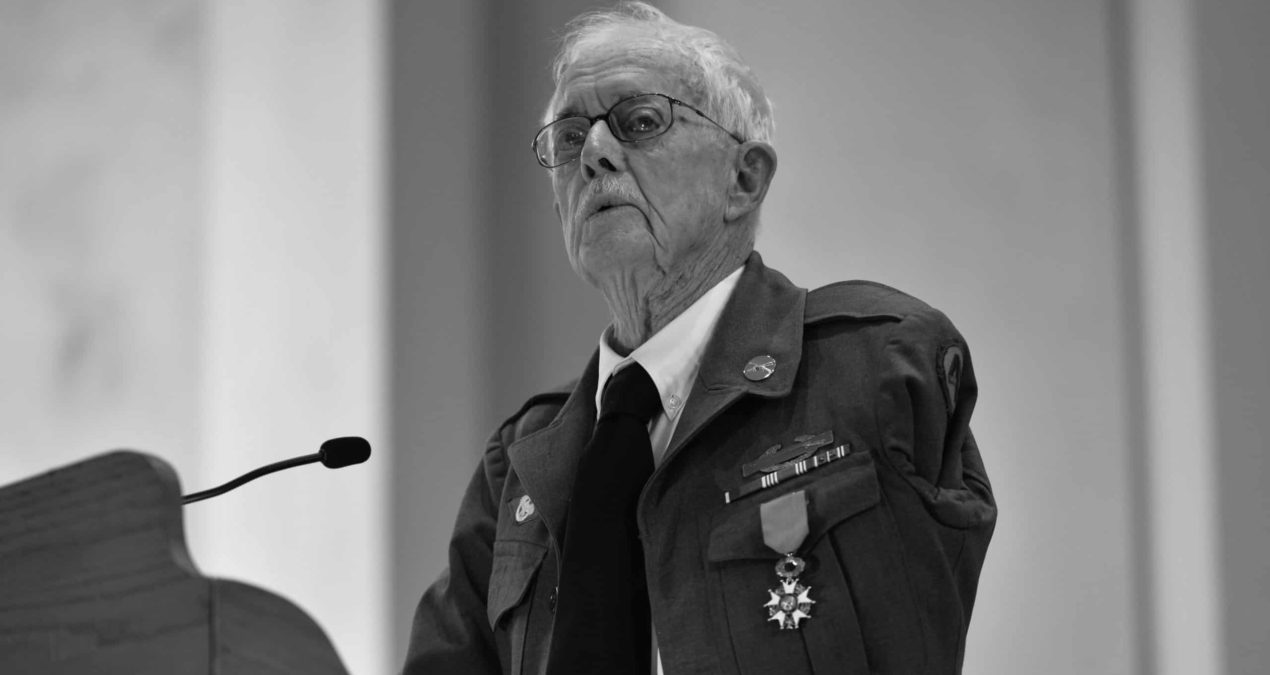 This past Veterans Day, Dr. Andrew “Andy” Sterrett was presented the award of the French Legion d’ Honneur. He, along with several other Granville area World War II veterans were recognized Friday, November 11th at Swasey Chapel.

Among the others honored at this ceremony were a few Denison graduates and retired faculty members.

The men who served were recognized and honored by Licking County Veterans Service Commission board member, Commander of American Legion Post 398 of Granville, and Denison graduate Arthur “Art” Morrow.

Sterrett taught Mathematics at Denison for 37 years before retiring. Dr. Arnold “Arnie” Joseph taught French and French literature until his retirement in 1990.

Dr. Trevor “Trig” Gamble was also part of the Denison faculty and taught Physics at Denison until his retirement in 1996. Additionally, Denison graduates James “Jim” Gordon, Pete Ullman, who had to finish his degree after his service due to being drafted at 19, Jack Heller and Paul Goodridge.

While the ceremony was to recognize the amazing sacrifice of local World War II veterans, a large portion of the program was designated to recognize one veteran in particular.

During the ceremony Sterrett was presented with the award of the French Legion d’ Honneaur.

While serving as an infantryman in the U.S. Army, Sterrett was part of the campaign to liberate France from Nazi occupation. During the campaign, on November 6, 1944 he was severely wounded in battle; Sterrett had lost his entire left arm. In July 1945 after months of recovery, Sterrett was given an honorable discharge from the U.S. Army.

Anne Cappel, the Honorary French Consul in Ohio, presented Sterrett with the award.

The Legion d’ Honneaur is, “the highest award that the Government of France can bestow for military or civil merit.” Sterrett was chosen as the honoree for his service to the U.S. and to France, to fight for democracy and the free world.

While Cappel was speaking of Sterrett and the countless men and women who gave their lives in World War II, she was hit with a wave of emotions that was also passed into the audience. Cappel’s speech shows how much Dr. Andy Sterrett’s honor and sacrifice has meant to the people of France.

During the ceremony, Dr. Adam Weinberg spoke of Sterrett and all that he gave not only his country but also Denison.

In his welcoming comments, Weinberg stated that Sterrett was one of Denison’s, “most loved faculty members” and was “keenly interested in the student experience”.

While at Denison, Sterrett was chair of the Math department twice, Provost, and Dean of the university. Sterrett was also on the Granville Board of Education along with Dension graduate and fellow honoree, James Gordon.

In Sterrett’s acceptance speech he acknowledged that he was not the only one who owns the award.

He stated that he had two friends who did not make it home from France along with a bunker buddy, Dwight who was honored with the award, as well as the two U.S. surgeons who operated on him in France. After the program, the veterans being honored took pictures just outside of Swasey chapel, and onlookers only spoke positive words of their dear friend Andy.