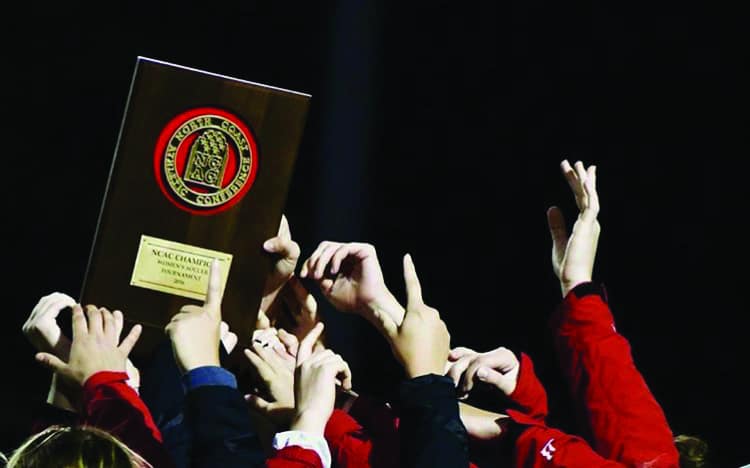 When Anne Denz stepped up to take the corner kick in the 89th minute of the match, she could have been thinking it may be the last scoring opportunity of her four years playing Denison soccer. If it was in her head, she did not let the thought shake her focus.

Striding forward, she rocketed the ball to the back post where it found Meg Wozniak, who kneed the ball past the goalkeeper for the only score of the NCAC Tournament Championship against Wittenberg.

The goal was the culmination of a conference tournament that tested the Big Red.

Only a few days before, the team had faced DePauw in another defensive battle. In that match, the scoreless tie lasted 85 minutes before Drew Wentzel ‘18 knocked a penalty kick into the back of the net for the win.

Wentzel was proud of the team and looking forward to moving on to the NCAA tournament next week.

“This win means a lot of things, different things, to everyone,” Wentzel said. “But I think in general, it means the consolidation of doing all the little things right and finally producing a result for all the hard work that goes into a season before you even step onto the field,”

“I think our team just needs to stay our course and do what we do well. Stay patient, but stay hungry. If we stick to what has been working well for us, even through long stretches with no results, then sooner or later we will find the back of the net.”

On the strategy side, even though the offense produced only one goal each in the final two matches of the tournament, forward Meg Wozniak ‘17 felt that they had run their system efficiently.

“We wanted to press hard and counter quickly and we did just that,” Wozniak said.

“We knew Witt was a good team and that they weren’t going to let down easy so we knew we had to communicate to stay connected on both sides of the ball.”

The Big Red will face Luther College in the first round of the NCAA Tournament in St. Louis on November 12, and the team will need every ounce of effort.

“Consciously thinking about what our jobs are on the field will help us to put our energy in the right place,” Wozniak said. “We just need to stay focused and make sure we leave everything we’ve got on the field.”

Photo Courtesy of by Frank Agin

Men’s soccer comes to a close