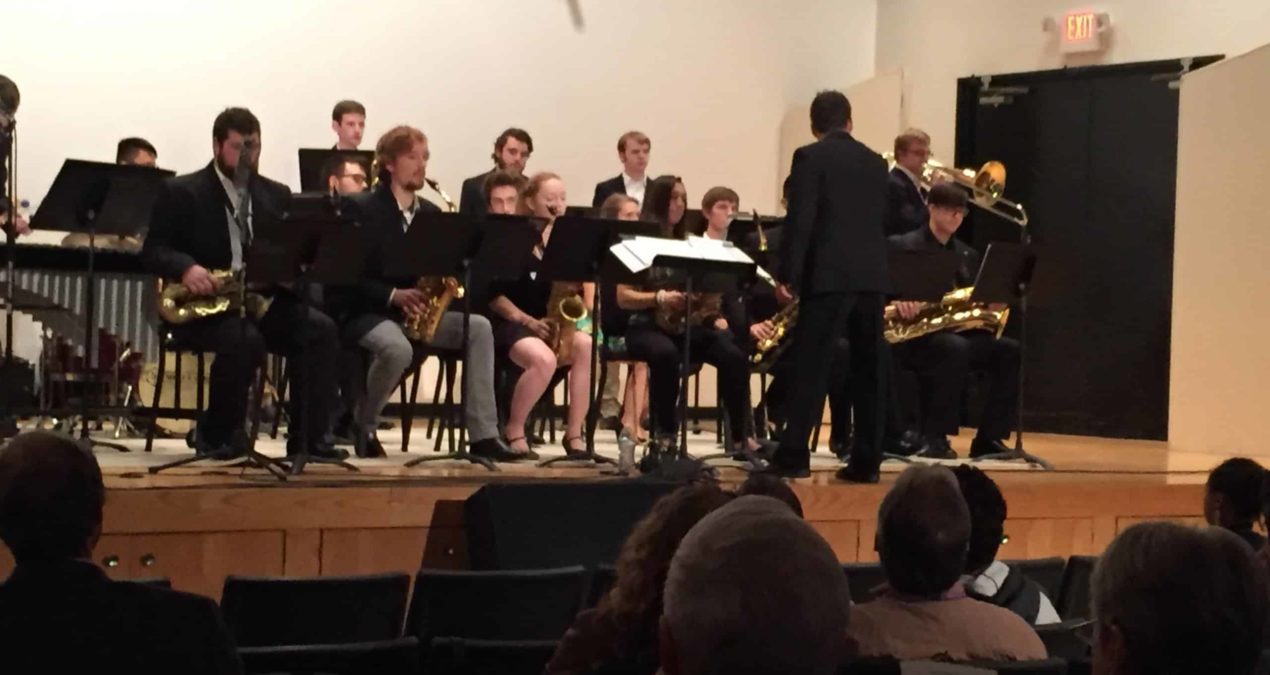 Even though the Jazz Ensemble Concert drew a large crowd into Burke Recital Hall on Nov. 16, it felt as if the audience was simply sitting in on a class, as Pete Mills, the director, walked among the musicians through their performance, hopping a little to the beat and enjoying himself. Still, the musicians brought their A-game, and the performance still stunned as each of the students showed off a little of their unique musical style.

Mills seemed to be instructing on the fly as he walked amongst the students, pointing to the next one who would stand for their solo in the opening song. Even though there were multiple musicians for each instrument, none of them sounded the same.

There was even a playful “battle of the trombones” in which both musicians excelled. It was clear that this was by Mills’ encouragement, as he said that in his classes he “[tries] to encourage improvisation.”

Sometimes they would seem to stumble a bit, but Mills was right there beside them, as was the audience, in keeping them going as they found their rhythm and a style that worked for them.

Part of the reason the ensemble seemed to work so well was how Mills seemed to trust their judgement, not even really directing as much as enjoying their music, only giving occasional guidance.

The concert seemed as much of a learning opportunity as it was a performance, which made it feel even more special in some ways.

But that did not mean that their talents did not shine through. A few songs in, vocalist Rachel Azbell ’19 joined the group. Azbell recently earned 3rd place in the National Association of Teachers of Singing competition, and it was clear that she deserved it based on her contribution to the jazz concert.

She sang some bluesy tunes reminiscent of older, simpler, classy songs and her powerful voice had a timelessness to it that really brought a cozy, wintery feeling to the concert. She was also versatile and sang some slower, sleepier songs and some funkier, energetic songs that kept everyone tapping their toes.

There were also several visiting musicians from The Walt Weiskopf Quartet who were inspiring to watch and listen. They had been working with the Denison students that week and it was clear that the students admired the experience that these guests had.

Overall, the casual environment made for a relaxing evening of comforting jazz and blues vibes that was a good break from the hard week of studying.