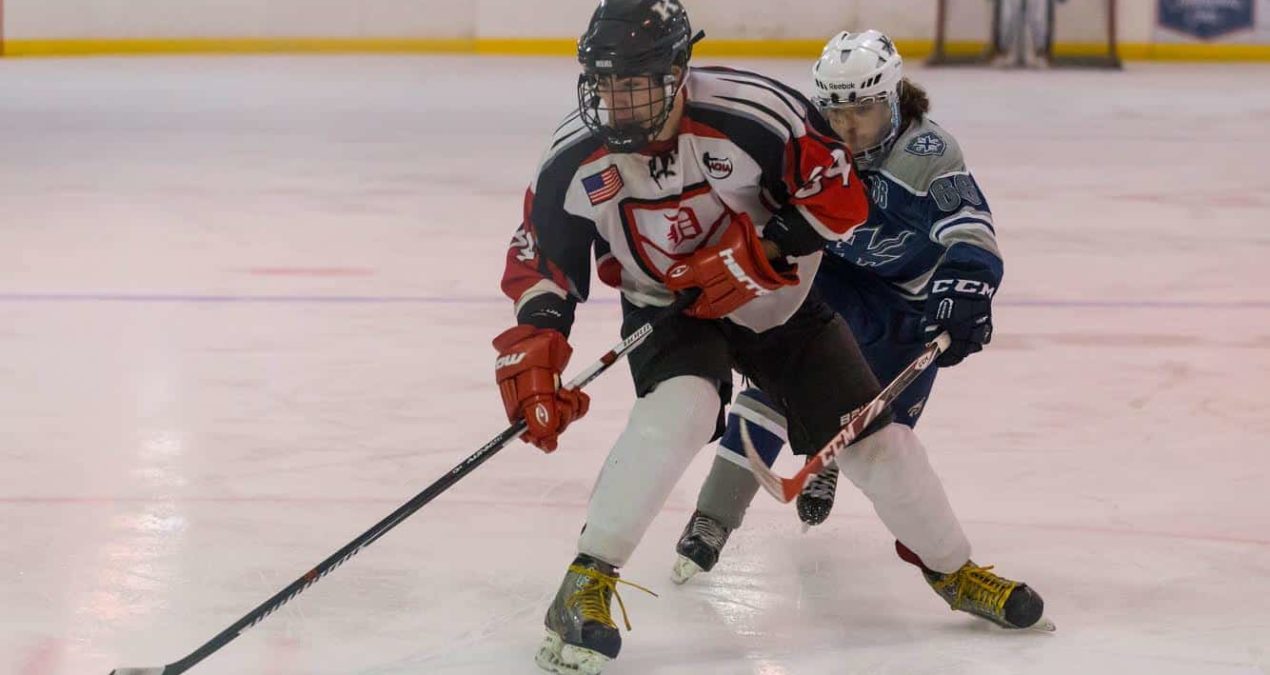 A small but passionate Denison student section provided energy throughout the Denison club hockey team’s physical and well balanced matchup with Xavier, cheering the Big Red to a 4-1 victory.

Action started off quickly in the first period. Both teams started out fast, using speed to try to get the best of their opponents. This strategy was met by both teams with an increased physical effort, with neither team passing up an opportunity to finish a check or battle for puck possession along the boards.

At 9:04 in the first period, Denison appeared to break through with a goal, but it was quickly waved off after the referees determined that the slap shot fired from the right side circle was deflected from above the crossbar, leaving the game scoreless.

The drama and frustration increased at 17:48 in the first period when Xavier had a goal waved off after it was kicked in off of the leg of a Xavier forward and into the goal.

After a scoreless first period Denison came out flying, striking quickly within the first four minutes to put them up 1-0.

The Big Red stuck with their aggressive offensive play, which resulted in a second goal not long after at 11:09 to put them up 2-0 halfway through the game.

Xavier quickly responded to Denison’s second goal with a goal of their own. They flooded into the goal crease and snuck in what would be their only goal of the game.

In the third period, Denison’s relentless offensive efforts paid off, resulting in two more goals, and some frustration from the Xavier squad.

Ryan Seymour ’19 tallied Denison’s third goal of the night after he made a cut toward Xavier’s net and buried a rebound to put Denison up 3-1.

With just 2:32 left to play in the game, Denison’s Ryan Strother delivered a heavy check and was thenw intentionally interfered with and taken down in his own zone. After the two players exchanged shoves, two other Xavier played joined in, delivering Strother a cross check to the back of the head. This incident prompted Denison players to stick up for their enforcer, resulting in an 8 player scrum at center ice.

After all the penalties were assessed, Denison was left with a 5 on 3 power play, which they took advantage of when James Haas ‘18 tallied Denison’s 4th and final goal by tapping a pass into a wide open Xavier goal with 1:36 remaining in the game. The final buzzer sounded, and Denison came away with the win.

Denison’s Ben Cousineau ’19 was pleased with the way the team was able to perform against their opponent, and what it may mean for the future of the team.

“I thought we played a very good game overall. We stuck to our strategy of playing smart defensively and taking lots of shots,” Couisneau said. “This game was also important for us because Xavier plays in a division above us, ACHA D3, and we are looking to play in that division next year. This shows that we can play in that league and be competitive.”

The team returns to action on Friday, January 20, 2017 with a home matchup with Marshall University.