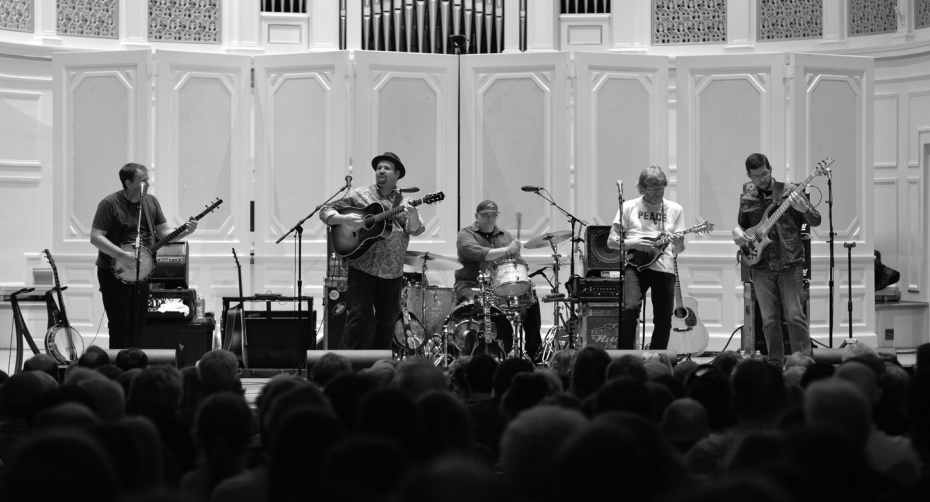 Throughout Sam Bush’s performance, audience members’ feet were tapping, their heads nodding to the beat and some even stood up to dance in the aisle.

Blazing fast instrumental solos accompanied by the thumping feel of the bass reverberating throughout the pews of Swasey chapel were just two aspects of Sam Bush’s fantastic Vail Series performance.

Before he and his band members even set foot on stage, the Denison student bluegrass ensemble gave an outstanding 45-minute opening performance to get the crowd grooving. The ensemble played a multitude of songs, with a wide range of sounds from up-tempo instrumental songs that featured student solos to slower country ballads with a heavy focus on vocal harmony that definitely set the stage well for Bush.

When Bush and his band members stepped on stage about 15 minutes after the conclusion of the Denison ensemble, they began to play straight away.

The band was dressed casually, with Bush wearing a pair of jeans and a white t-shirt that read “PEACE,” that perfectly fit his easy-going demeanor and relaxed attitude.

Bush began by playing “Play by Your Own Rules,” the opening song from his most recent album, “Storyman.” He then quickly followed that up by moving into their second song, “Transcendental Meditation Blues.”

After these opening melodies, he talked to the audience for the first time: “Good evening music lovers, it’s time to ride the bluegrass train!”

What separates Bush from traditional bluegrass music is his inclusion of nontraditional instruments such as the electric bass, electric guitar, a drum set and the choice to use amplified instruments as opposed to some acoustic instruments.

He also deviates from traditional bluegrass in the way that he plays his music. Bluegrass usually sticks to a very specific pattern of notes, with a distinct lack of improvisation or syncopation. Bush incorporates extended solos that use a level of improvisation similar to the blues or jazz, along with an infusion of rock, reggae and funk into his music, all while sticking to the bluegrass sound.

It is for those reasons that Bush is considered a true revolutionary in the bluegrass genre; leading music experts to call his music “new grass” music.

In his own words from the concert, “we go all over the rhythm map with what these [instruments] can do.”

He provided an engaging experience, talking to the audience and cracking lighthearted jokes to stay connected with the crowd.

When he and his band members played their music and exchanged solos back and forth, their passion was evident. They engaged each other during the concert, giving compliments to one another and feeding off of the energy produced by each awe-inspiring note. Every band member had their own way of showing their appreciation to each other and to the crowd.

Sam Bush and his “new grass” sound were a fantastic way to end the Denison bluegrass festival, and he definitely showed the crowd why he has been so heavily awarded over a storied, yet still evolving, career.