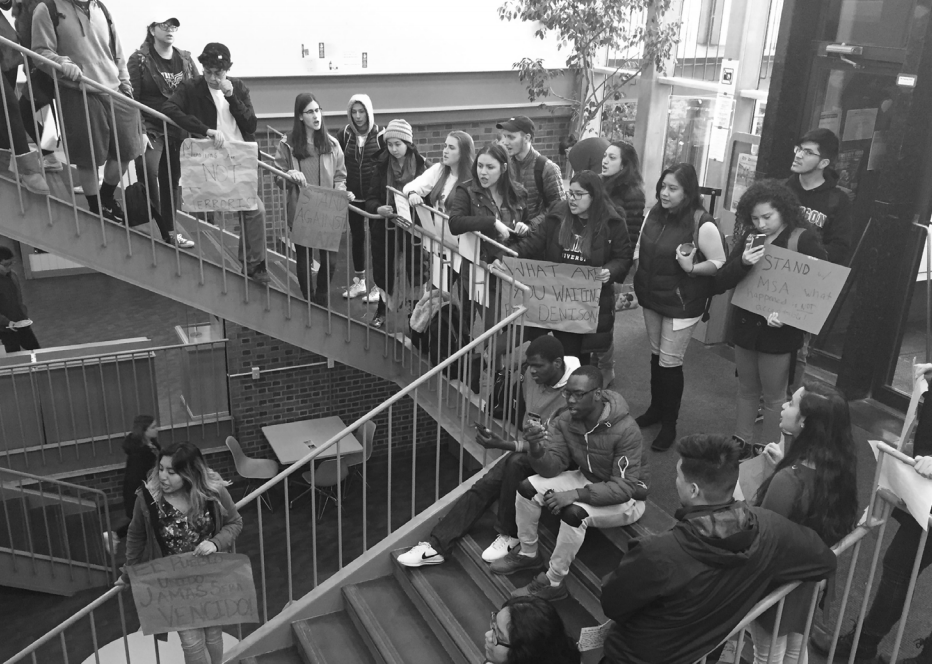 Tension has been building as offensive words, vandalism, and other hate crimes have been circling around Denison. In the aftermath of an incident concerning the Muslim prayer room in Slayter, students have made sure they will not put up with this kind of intolerance.

On Feb. 20, the Muslim prayer room was discovered with items misplaced around the room and in disarray, including two Qurans left on the floor, an offense to Islam.

A Campus Safety report was filed after statements and photos were taken. While the incident is still under investigation, students are making sure everyone at Denison knows that this is an act that is harmful to our community.

Phoebe Myhrum ‘11, Interim Director of Religious and Spiritual Life at Denison, was able to answer some questions on the subject.

“A handful of students use this prayer space regularly. But what everyone needs to know is that the safety and sanctity of the space is important even if just one student used this space,” said Myhrum. “Though student voices are best for answering this question, and I can’t speak for students, I can speak on behalf of them and say that this was very upsetting for the students that use the Muslim prayer room. It felt like an attack on Muslim students, and we are treating it like that.”

As the prayer space continues to be put back in order, new security measures are being prepared to keep the space safe from any future attacks of vandalism. Students are also taking a more vocal approach to getting recognition to this incident and showing support for the Muslim community.

All last week students gathered to write messages of love for the Muslim prayer space and have gathered to protest in Slayter.

Students who protested in Slayter took this opportunity to not only speak up in defense of the Muslim prayer space, but also in support of other minority groups. Many people brought signs to the protest, which read messages denouncing the wall and travel ban President Trump had previously signed into effect the preceding days.

Students also protested for the LGBTQ community. Members of this community have also experienced hateful acts from unknown people, including offensive slurs written on students’ doors.

“We all make up part of this community and we all belong here, so we need to hold each other accountable for our actions. It is our duty as human beings to care for and show empathy towards each other as co-inhabitants of this planet,” said Monica Starr ‘20, a participant in the Slayter protest.

Many people are hopeful that some students who do not realize how minorities may be fearful of hate everyday will recognize their concerns.

“Generally, every single day we can offer each other respect. We can trust the experience of others, prioritizing empathy in our interactions with each other. Step into your influence among your peers and step in when you see or hear of a community member doing something hurtful, big or small,” said Myrhum. “We can all do a part every day to maintain a standard of respect at Denison.”

Members of Religious and Spiritual Life check on the space regularly and Campus Safety often patrols the fourth floor of Slayter. There is also a sign on the door of the Muslim prayer space that clearly indicates how the area is to be used. Students would have no problem understanding how destroying this room would be disrespectful and hurtful to many people.

“In the least, this serves as a reminder that these things do happen here. Believe people when they say it. Believe your Muslim colleagues and peers when they say ‘we don’t feel safe, even at Denison,’” said Myhrum.

“I think the most important thing to do right now is show our fellow students that we are here for them and that this kind of stuff is not acceptable,” said Katie Aucamp ‘20. “It really just breaks your heart to hear this kind of news.”

Faculty, staff and student members of the Campus Climate Team will be tabling in Slayter this week to share information about the purpose of that team and how community members can use the blue whistle icon to report incidents on campus. Campus Safety will continue to investigate and do security rounds in Slayter.

The fourth floor of Slayter Union is an open space and therefore is not typically regulated. Students often flow in and out of the floor, so there is little evidence pointing toward who may be responsible for the attack.

If anyone has any information about the destruction of the Muslim prayer room, please contact Campus Safety at 740-587-0810 or submit an anonymous report via the blue whistle icon on MyDenison. It is likely that the prayer room was disrupted during the prior weekend, sometime on Sunday, Feb. 19, 2017.