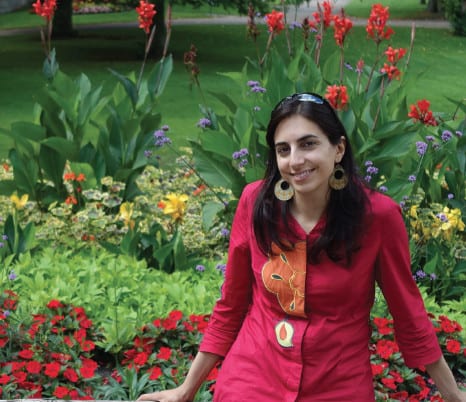 Dr. Hosna Sheikholeslami is the department of sociology and anthropology’s newest faculty member. An Iranian-American born in Tehran, Iran and raised in the San Francisco Bay Area from age four, Sheikholeslami studied Comparative Literature at Berkeley, where she also started an interfaith dialogue council, an organization that remains on campus today.

While she settled herself in the humanities, her undergraduate experience supported her love of culture and languages. “I knew I wanted to study literature, but I also knew I didn’t want a PhD in it,” said Sheikholeslami. Sheikholeslami eventually took a course in development, taught by an anthropologist.

“It was one random class,” said Sheikholeslami, “I didn’t know what I was getting myself into.” She was hooked. The next year, she sank her teeth into anthropological books, reading anything she could get her hands on.

After graduation, Sheikholeslami traveled to Amman, Jordan to learn Arabic for six months. Upon her return, she enrolled in graduate school at Yale University for anthropology in 2009.

Anthropology allowed her to combine her social science interests and her passion for literature. Sheikholeslami’s field work took her to Tehran, Iran in 2012, where she spent two years researching how censors choose  texts of Western social science and philosophy to translate from English to Farsi.

Her dissertation argues that there’s an assumption that texts travel simply because of the ideas they carry or, more specifically in her words, “that ideas [can] make revolutions just because they travel to a place.” In reality, Sheikholeslami believes that people’s ideas about what texts do, the materiality of texts and the political economy of a national  space play massive roles in spreading translations, and subsequently ideas.

Sheikholeslami lived in Tehran during a particularly intense political climate, as the conservative leader Mahmoud Ahmadinejad left office and a more moderate leader, Hassan Rouhani took over the presidency.

The transition from Ahmadinejad’s administration to Rouhani’s was, in Sheikholeslami’s words, “night and day.”

“Things opened up and it became safer for me to wander into government offices to ask ….questions,” she said.

While Sheikholeslami herself is Iranian, her immediate family still live in the Bay Area and she doesn’t plan to live in Iran any time soon. She commented that the biggest difference between Iran and America is opportunity.

“Emotionally,” she said, “ youth don’t have sense that they can build their future. There’s a sentiment of hopelessness that stands out there.”

Place and space are concepts dear to Sheikholeslami that go beyond her research. It was the feeling of the “right” space that helped her know at age 11 that she would attend an all girls middle and high school–a place still dear to her heart.

It was the same feeling of belonging that drew Sheikholeslami to Denison.

“I remember sitting in my room at the Granville Inn, not having been offered the position yet, but just thinking wow I really hope they choose me,” she said.

While she didn’t know about Denison until she applied for a faculty position, she was drawn in by the website, which she says gave her a strong impression of community and good communication. In her first semester she’s teaching people, culture and society, the department’s introductory course. She is also teaching an upper level course, the anthropology of Islam, which examines both historical and contemporary approaches to the anthropology of Islam and Muslims. Sheikholeslami hopes to teach courses of materiality, translation and Iran in the future.

In her free time, Sheikholeslami enjoys running and swimming. She completed her first sprint triathlon this past summer and hopes to do more. She also loves reading novels; her most recent book obsession is Ursula K. Le Guin’s Left Hand of Darkness.

From California to Connecticut and all the way to Iran, Sheikholeslami has found herself in Granville, and we’re certainly glad she’s here.