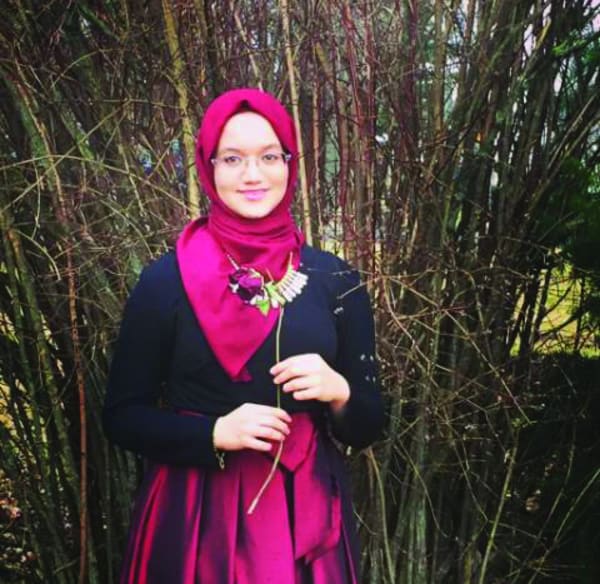 If you’ve seen a brightly colored hijab on campus with a smile that shines even brighter, you’re probably looking at first-year student, Sara Abou Rashed.

Behind her smile lies a backstory that no one would predict. Rashed is a refugee from Syria, who sought sanctuary in the United States four years ago.

She didn’t know any English, but that didn’t hold her back from becoming completely fluent in the first few months that she was in the United States, excelling in school and making a home here on the hill.

In 2013, Sara and her family fled Syria when the war became more violent and dangerous near her home. They decided to settle in Columbus, where her uncle resides.

“The war has been the deciding factor in my life – we moved because of it, our house was destroyed, my Dad passed away during the war… It has changed the way I view life entirely,” said Rashed.

However, she doesn’t believe that the war was entirely detrimental. Sarah Abou Rashad ‘20 leaves her home in Syria to find her way to Whit’s ice cream in Granville.

“It inspired a lot of people including myself. It has also allowed certain people to shine and show their talents in other countries,” Rashed said.

She started to learn English when she studied “The Odyssey” in her high school English class.

“I used to translate every single word of the text to Arabic… I would spend long hours studying and memorizing the words, but within a few months, my English got really good and I even started writing poetry in English,” said Rashed.

Since learning English, she has excelled in school, even going so far as to winning poetry competitions. Sara has been featured on many news channels and TEDxColumbus. She has spoken at many events, including her most recent, the Ohio Women’s Leadership Summit.

Her poetry and art have also been highlighted in many publications including: Common Threads, Clover and the America Library of Poetry.

Sara plans on pursuing a major in International Studies with a potential minor in English, with a narrative non-fiction concentration.

She wants to get involved in politics because she believes that not a lot of politicians can relate to or have experienced what they’re talking about. Sara, however wants to become the exception.

She is excited to spend the next four years here on the hill, making friends who will help her grow as a writer, speaker and poet. She looks forward to sharing her story with the Denison community.