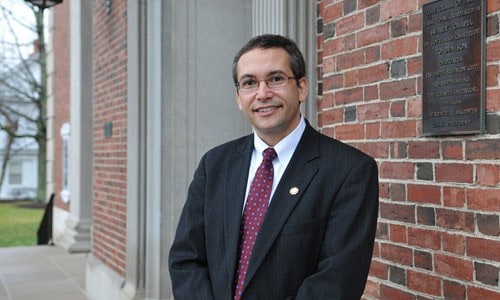 Imagine going from a place you have known your whole life to being forced back to a country you’ve never been to.

These children are often brought by their parents at a young age. This means they are likely to know nothing of the country they came from.

President Weinberg issued a statement about the DACA program on Tuesday, September 5.

“A change in DACA will have direct impact upon several Denison students and has important implications for other students, faculty and staff,” said President Weinberg.

Along with several other Ohio liberal arts schools, President Weinberg wrote a letter of protest to Congress to show the importance of DACA.

The letter reads in part:

DACA students – who have de ed every obstacle in order to pursue education at our colleges and others around the state – are persistent, talented, and successful members of our academic communities. They grew up in our country, excelled in its high schools, and now stand ready to contribute to our nation. Cutting short their educations through threatened deportation denies them – and us – the promise of that future.

DACA will be faded out over the next few months, as President Trump asks Congress to produce a new policy.

“While I am hopeful that Congress will move quickly to create legislation for young people caught in this bind, I am incredibly disappointed that President Trump has taken this position without the legislative gap rst being closed. It stands against my values and I believe the values of this college,” said Weinberg.

Denison is working closely with the DACA students attending school to determine what needs they may face and what protections we can put in place.

“I would ask for everyone on campus to be attentive to these issues and their impacts. A belief in diverse communities is a core value of this college, but it must go beyond the demographics of who is here; it is also how we stand with and support each other,” Weinberg continued.

He also encourages people to share their thoughts with their congressional representatives.

Weinberg’s final thoughts were, “This issue will be decided by Congress over the coming months. It provides a chance for all of us to exercise our rights as citizens.”