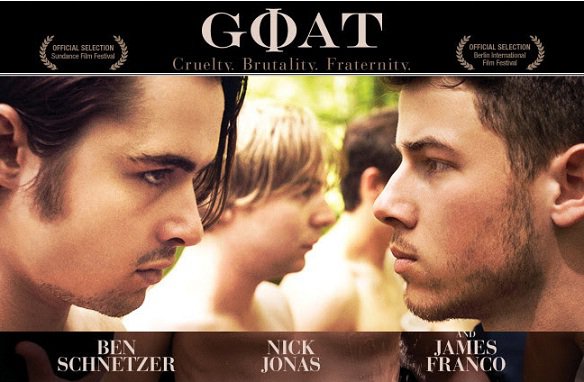 by Marisa Hombosky
No Comments

The room went dark. The screen was filled with shirtless young men, screaming in slow motion at the camera. Testosterone boiled over in the faces of each man, with a need to overexert their power over someone. That someone was a pledge.

The Alford Campus Leadership and Involvement Center (CLIC) showed the movie “G.O.A.T.” for National Hazing Prevention Week (NHPW). Members of the community were invited to have a discussion about the hazing culture on campus and across the country.

NHPW is an opportunity for campuses, schools, communities, organizations and individuals to raise awareness about the problem of hazing, educate others about hazing and promote the prevention of hazing. HazingPrevention.Org is the organizer of National Hazing Prevention Week (NHPW).

The showing started off with members from the community leading a discussion about the culture of hazing. The discussion was led by Léna Crain, the new As- sociate Dean of students and the Director of Campus Values and Conflict. This is Crain’s rst year in these positions.

Four members of the Denison community joined Craine. Ashley Lowe ’18 is an education major and environmental studies minor, a member of Delta Gamma, as well as the president of the Panhellenic Council.; Robert Ghiloni is the head men’s basketball coach; Jeremy Torres is a political science major who is a member of Outlook, a gay-straight alliance organization on campus; Luceli Hernandez is an anthropology and sociology major, a member of Mena Sigma Lambda Gamma National Sorority Inc. and the president of Multicultural Greek Council .

These members of the panel led the discussion about hazing.

“‘G.O.A.T.’ has forever changed the way I think about hazing and the detrimental effects it can have on new members of any organization. This movie is a great reminder that we are all human and deserve to be treated with dignity and respect,” said Lowe.

Robert Ghiloni required his entire basketball team to attend the viewing. Ghiloni felt that it is important to the culture of the team to understand that there is a zero tolerance for any acts of hazing. “At most schools, it’s the freshmen’s duty to carry the equipment. On our team, it’s on the seniors. We make it a point to let the freshmen know early on that everyone on this team is equal. There is not a hierarchy or paying your dues. You cannot be successful with that kind of culture on your team.”

In the movie “G.O.A.T.,” nineteen-year-old Brad is a new college student and wants desperately to fit in. Taking a cue from his older brother, Brett, Brad decides to pledge the fraternity his brother is a member of. At first, it’s all parties and girls, but as Brad enters into the final stretch of the pledging ritual, known as ‘hell week,’ things take a violent, humiliating turn.

The movie shines light on the gruesome practice of hazing potential members of a fraternity (pledges). “G.O.A.T.” continues the conversation of hazing and hopefully put a stop to the ‘tradition.’

Homesteaders move out due to mold