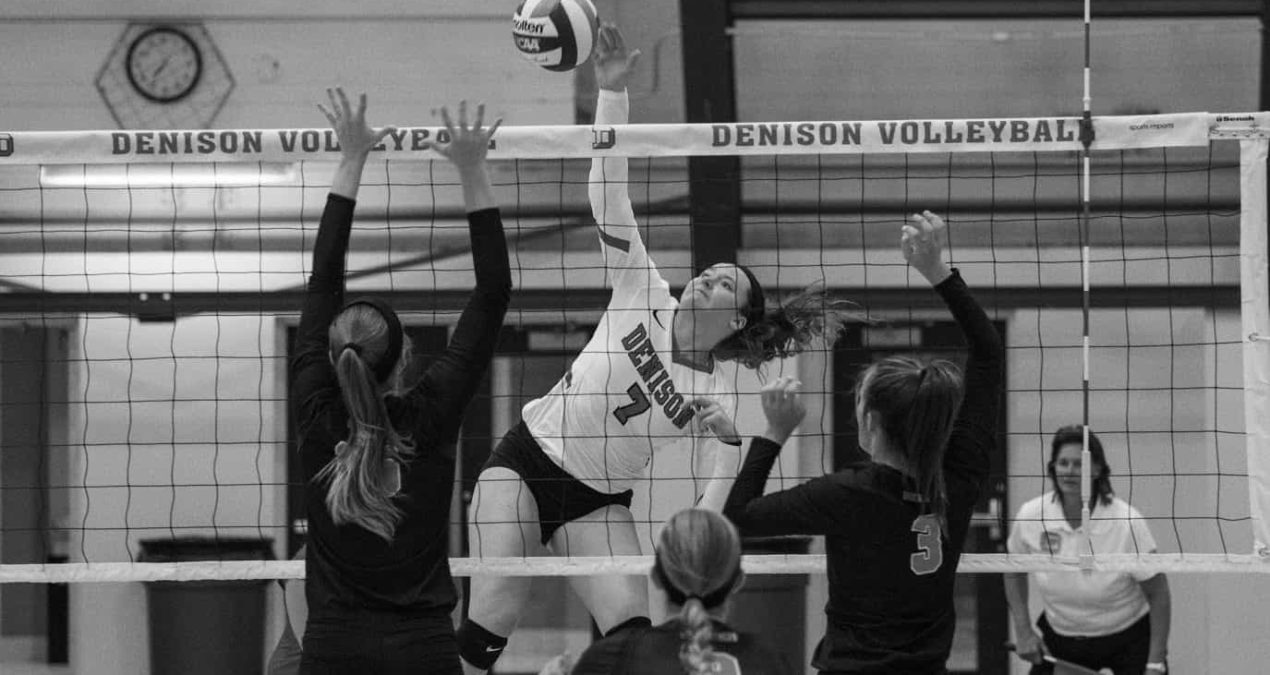 Exhaustion showed on the faces of the Big Red, but signs of quitting were nowhere to be seen. Serve after serve, Denison matched the Ohio Northern Polar Bears’ intensity. The Big Red weren’t going down without a fight.

The volleyball team returned to Livingston Gymnasium to face the #22 Ohio Northern Tuesday, Sept. 26. Unfortunately, Denison was defeated by the Polar Bears 3-0 in their sets.

The team suffered a big setback after losing starting right side Bella Pivec ’19 to a concussion in last weeks’ game. However, Denison was able to ll this loss and give Ohio Northern a run for their money, especially in the third set where the Big Red really came together as a team. Captain Julia Miller ‘19 said, “felt that the team played their best in the third set where we were playing relaxed and con dent.”

In this rst set, the Polar Bears scored rst, but Denison quickly answered with a kill by Alex Tubbs ’20 assisted by Miller. This back and forth continued until the Polar Bears began to take control of the match scoring three unanswered points bringing the score to 14-8 Ohio Northern. This series was then ended by another kill from Alex Tubbs ’20 and another assist from Miller. However, with the momentum on their side, Ohio Northern was able to successfully control the rest of the set, winning the rst match 25-16.

In the second set, Ohio Northern was again able to take control early in the set. However, Denison did remain stronger in this set, not allowing Ohio Northern to get a signi cant lead for the first half of the match. With the score 21-16 Ohio Northern, Denison scored two quick points bringing them within three points of the Polar Bears. Unfortunately, Ohio

Northern was able to nish this match as strongly as they were able to start it, beating Denison 25-18.

Throughout the third set, Denison continued to build upon their improvements from the second match. With every point that the Polar Bears scored the Big Red answered right back at them. However, the Polar Bears slowly began to outscore Denison again like the other two matches.

Soon the score was 17-13 as the Polar Bears began to pull away, which looked like it was going to be another easy Ohio Northern victory. However, the Big Red was not going to allow this to happen again.

Emma Woerner started the comeback with a quick kill assisted by Julia Miller. In the next play after a key block from Leah Reinfranck ’18 Denison was able to get another point on the board brings them back within two points.

Ohio Northern again started to slip away from Denison increasing their leading to 24-17, but the Big Red was not ready to give up yet. They scored seven points in a row ve of which are from Miller bring the score to 25-24. However, Ohio Northern was just able to score another successful point, which won the match for the Polar Bears 26-24.

In this hard-fought match Denison was led by Leah Reinfranck ‘18 and Emma Woerner’21 who each totaled 10 kills. Julia Miller led the led the team in assists totaling 28 by the third match. Kristine Thewes had the match-high 34 digs. After this match, Captain Miller stated that as a team, “We are working to playing our best volleyball at the end of the season (conference), which is a huge goal for us and our coaches are pushing us every day to get there.”

On Sunday the Big Red faced a double header against Otterbein and Hiram. Both games went to five sets, with Denison splitting the games, losing to Otterbein 3-2, but defeating Hiram 3-2. Denison’s overall recorded improved to 8-7.