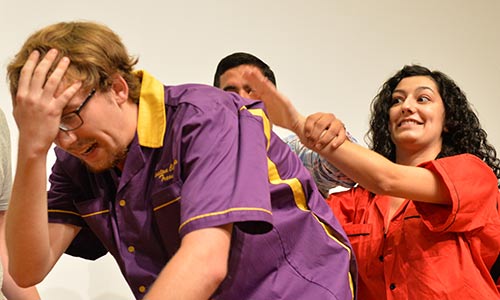 At exactly 10 p.m. on Saturday night, Herrick Auditorium was filled with applause as the audience gave Burpee’s Seedy Theatrical Company a standing ovation. They were cheering not just for a great show, but for the Burpees’ successful completion of 24-hours of nonstop improvisation.

An impressive feat, but perhaps even more impressive was the way the Burpees collectively finished a can of whipped cream once they reached their fundraising goal.

From Friday at 10 pm to Saturday at 10 pm, the Burpees gave up 24 hours of their time (and lots of sleep) not just for our entertainment but to raise money for a good cause.

This year, Sara Hartsock ’18 took on the Burpees’ annual charity performance as her senior project, choosing to donate all money raised to hurricane relief.

At a glance, this show seemed to follow the Burpees’ formula of a performance packed with improvised antics and hilarity, but there was a twist: the audience could give their own suggestions for the Burpees. After an audience member donated, they could request anything from an improv game to an interpretive dance for the Burpees to perform. This encouraged the highest level of audience participation, which could be the reason the Burpees never had an empty house during their 24-hour long performance.

The audience supported the Burpees every step of the way, by bringing them food and donating money to the cause. By the end of the show, the Burpees reportedly raised $220 in cash, and even more including donations received through Venmo.

Senior Burpee Peter Malicky described the performance as “exhausting and definitely weird.” However, he seems to have a special appreciation for the 24-hour show. “It’s such a shitty experience, so we’re bonded through it,” Malicky said. This was evident from the enthusiastic yet fatigued group hug the Burpees shared after the show Saturday night.

To say they gave it their all would be an understatement. The Burpees’ improv remained funny and unexpected as always, but their sleep deprivation gave the show an extra touch of eccentricity.

This made them just as entertaining to watch at 1 am while dancing to Beyoncé’s “Partition” as they were at 9:55 pm Saturday, improving three-line scenes.  Where can you find the Burpees now? As the 24th hour rolled in, Atticus Daniels ‘20 announced, “We’ll be sleeping from 11 tonight until Tuesday.”

Crazy Rich Asians is an enjoyable experience but shallow cinema