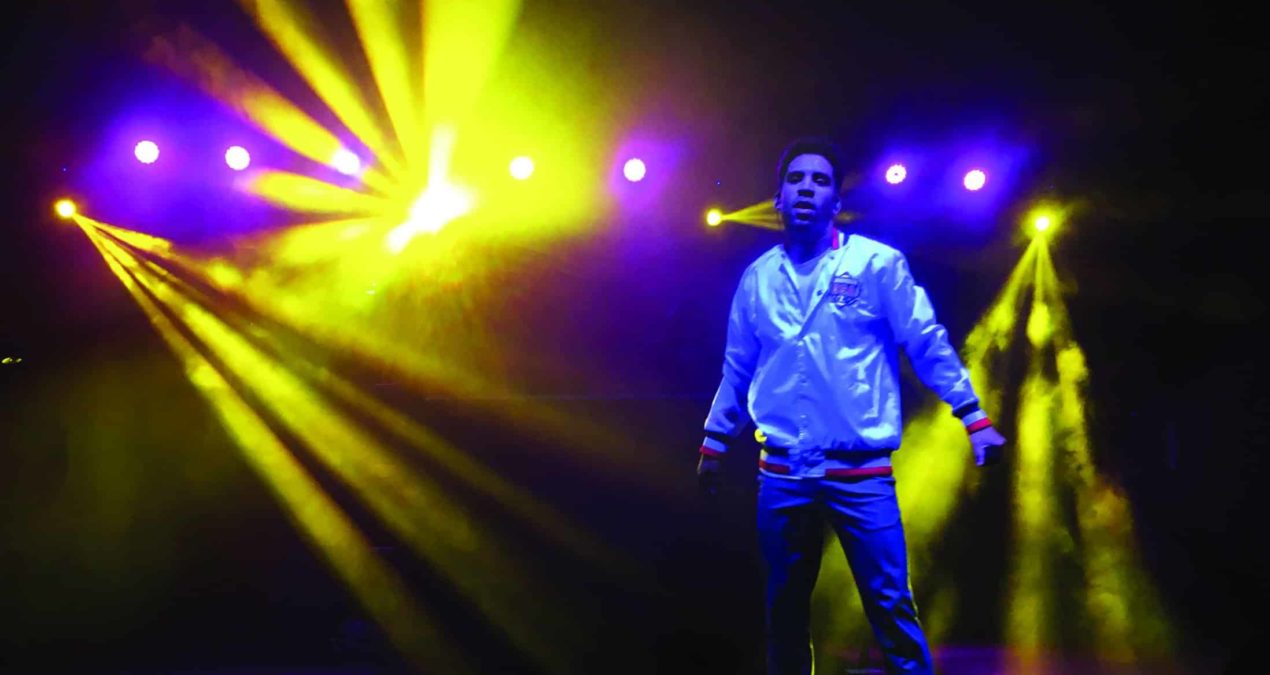 The indoor track of the Mitchell Center transformed into a cesspool of millennial madness for the 2017 D-Day concert.

It was packed with intoxicated students snapchatting, fist pumping (do people still say that?) and pretending to know the lyrics to the rap songs of this year’s musician, KYLE.

Effervescent and bombastic, KYLE was reminiscent of Kanye West at the 2009 Video Music Awards. He continuously jumped all over stage and probably talked more than he sang. He seemed to be in it for an ego trip rather than for the music.

At one point, he tried to get the crowd to shout-out love for Jesus, and received blank stares and a few pitiful, silence-filling laughs. But, that didn’t stop him from having a good time.

“KYLE was a jumping firecracker of energy. He literally jumped the entire time and that was his only dance move,” said Eva Rosenthal ‘19.

His energy must not run on too much gas because, for whatever reason, he was only on stage for about 30 min, which is still shorter than the average waiting time at the Bandersnatch. It’s about the length of an episode of Young Hercules, a gem of a late 90’s children’s show starring Ryan Gosling, but not nearly as enjoyable.

This is at least the third consecutive year the D-Day performer has been a hip-hop artist.

Some students noticed a tangible difference from previous D-Day experiences.

Perhaps more variety in music would benefit the event in the future.

“I am aware you can’t please everyone, but I think bringing a rapper every year is getting tiring. I think there needs to be more diversity in genres brought to D-Day. I felt like the only thing that made this one different from the last three years was that it was even less entertaining,” said Jorge De La Torre ‘19.

He heavily relied on the pre-recorder, providing a weak live performance that remained, in some ways, invigorating. Was KYLE’s performance representative of the struggles of our generation, lost in modern society?

The dazed expressions of the audience and their lackluster nodding contributed to it being “a fun night, but still not nearly as fun as my cousin’s bar mitzvah,” said Eizo Lang-Ezekiel ‘19.

KYLE tried to get the crowd more energized and took notice of the crowd’s spicy intoxication level. “Wow, everyone in Ohio is drank as f***k right now,” he said, before introducing a song.

He told the crowd the three things we should care about: “1. Your mama 2. Jesus and 3. KYLE.” Clearly, this is a young man who has his priorities straight.

He thanked all the women for coming because, “We would be nothing without you all.” He dedicated his songs to women. He pointed to women in the crowd and said, “You’re so beautiful.”

Throughout the concert, we kept thinking to ourselves: okay, Kyle, we get it — you really like women.

It was one of those classic situations where a millennial man thinks that if he acts extra chivalrous and excessively praises women, he will earn a feminist label, but really, he just comes off as downright creepy.

I guess all of this should be expected from a man whose hit single “iSpy” is about wifing-up an easy, less-famous-than-himself woman on social media, “A curly-headed cutie I can turn into my wife.”

“iSpy” was his final performance and the singular song of the night that filled Mitchell with ballistic energy. KYLE let the crowd do most of the singing, and the voices outpowered the sound of the track. For a few minutes, the crowd finally had just as much energy as KYLE.

When the concert was over, campus security and Denison staff members handed out Elm’s pizza outside the Mitchell Center.

The crisp, tasty pizza was everything everyone needed. We would probably give the pizza a better Yelp review than KYLE’s concert.

Our friend said, after biting into a slice of pizza, “KYLE was weird, but this pizza is good.”