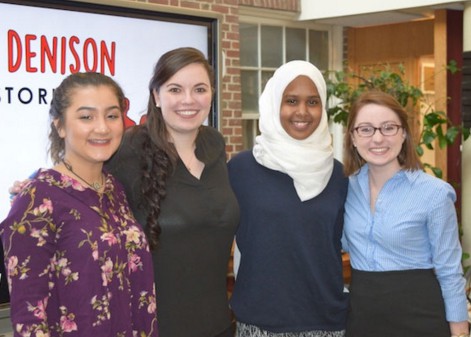 November may be known as the beginning of cold weather and preparing for annual Thanksgiving feasts, but more importantly, it’s Refugee Awareness Month. From November 6-10th, a group of students led by Madina Khudaynazar ‘19, an international studies major from Boston, are leading a week of events for Refugee Awareness Week for the third year in a row.

Two years ago, Khudaynazar and Erin Worden ‘17 founded Refugee Awareness Week at Denison with the hope of giving refugees on campus a voice and recognition.

“Our campus can be a microcosm at times and can isolate us from other parts of the world. We founded Refugee Awareness Week during my first year. It’s important for us to remind people that refugees are not a security threat, they are people. We ultimately want to remind people to be supportive of refugee,” said Khudaynazar.

Along with Khudaynazar, Mayank Kumar ‘21, Mark Reid ‘21, Fatima Haroon ‘21 and Simran Ali ‘21 are assisting with the upcoming events.

Denison students with Diaspora background, meaning individuals who belong to a collective that have fled a country in crisis, will be sharing their poetry and stories to speak of their own experiences as refugees. It was the first of the three events and was held on Monday, November 6, in the Roost.

On Wednesday, November 8, from 7:30-9:00 p.m. in the Slayter Auditorium, the film Staging Post will be screened. The movie is a true story of Afghan refugees fleeing to Australia, a country that continues to voice a rhetoric that refugees are not welcome in their country. The group becomes stuck in Indonesia trying to get to Australia as a result.

Lastly, on Friday, a discussion of refugee activism at Denison will be held at Knobel Hall from 5:30-7:30 p.m. in which students will discuss what Denison has done, and is continuing to do within the refugee crisis.

After the first Refugee Awareness Week, the school created the Global Fellows Committee. The committee settled an Iraqi refugee couple for six months (with the help of the Granville community) and provided them with jobs at Denison. Since then, the Global Fellows Committee has become a DCA committee and works with the Columbus Refugee Immigration Services. The purpose of this to help integrate refugees from different countries.

“My upbringing was different than the average Denisonian. My family and I came from Afghanistan when I was only three years old. It’s important to put a face to refugees and to understand how this problem can potentially affect everyone. Pilgrims were the original refugees to America. It’s not just about focusing on the war, bombings and death tolls themselves, but to focus on the long-term effects of these things as well,” said Khudaynazar.

There are around 65 million refugees worldwide, making it incredibly important to bring light to the fact that people will continue to become refugees. One main focus of Refugee Awareness Month (and Denison’s Refugee Awareness Week) is to recognize the importance of making sure these individuals are not objectified, but humanized. Language and Culture House will close, but something new is coming