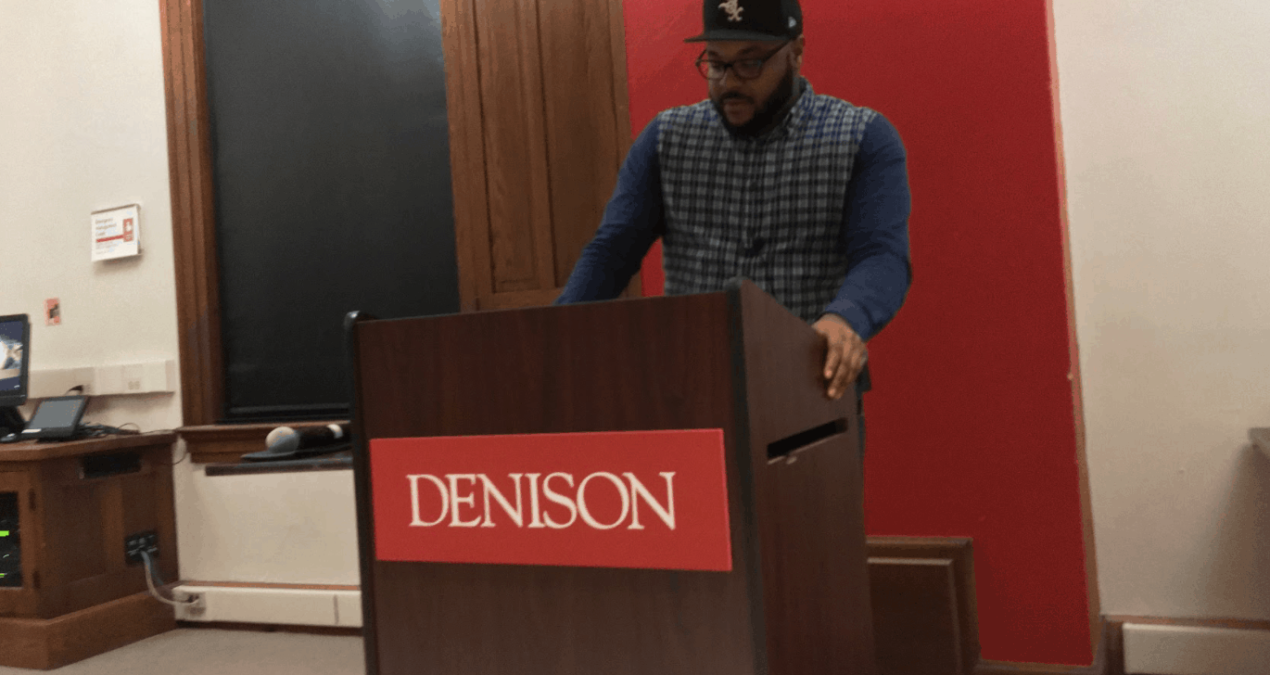 CASEY TRIMM, LIZ ANASATASIADIS– By the sponsorship of the English department and the Harriet Ewens Beck Fund for visiting writers, Denison was beyond excited to bring creative and influential poet Nate Marshall to campus this past Monday. With his captivating words and contagious smile, Marshall took Denison by storm with a unique, entertaining performance of his work.

Nate Marshall, a critically acclaimed poet, visited campus to recite some of his poems as a part of the Beck Series here at Denison. The Beck Series has been an English department tradition every semester for the last fifty years. The department invites talented writers to come and recite their pieces to the public.

Nate Marshall is from the southside of Chicago, Illinois. He has written and appeared in several books, such as Wild Hundreds, The Breakbeat Poets and Blood Percussion. He was inspired to write because of the influence of hip-hop culture he experienced during his childhood. He is currently travelling around the nation to several universities to recite his works.

English professor Dr. David Baker had the honor of opening up the event with a kindhearted introduction of Marshall and his accomplished works. He discussed one of Marshall’s books Wild Hundreds as “sizzling with the voices of Chicago’s southside.”

Wild Hundreds celebrates the people, places and culture left out of civic discourse, while also incorporating the beauty of Black survival and tragedy of Black death.

Marshall’s poems speak and sing, remember and look forward. Recently, Marshall has been a part of an important new anthology titled The Breakbeat Poets, which investigates hip-hop culture among youth and features 78 poets who revolutionized their genres.

According to Marshall, “One of the first things that made me want to be a writer was listening to rap. They are observers and rhymers that document their emotions in their music.”

“His vernacular, imagery and form came together to make me understand him intimately. I left feeling warm, changed and expanded by his art.”

Marshall’s The Breakbeat Poets is the first anthology by and for the hip-hop generation, those who love the genre and those interested in discovering what it means to be alive in this moment in time.

Marshall is well known in the Chicago area and far beyond for his reading and advocacy of young writers in open mics and performances. He has won a wall full of awards for his work on the page and outloud.

Wild Hundreds has been honored with the Black Caucus of the American Library Association’s award for Poetry Book of the Year and The Great Lakes College Association’s New Writer Award. He has also received fellowships from Cave Canem, The Poetry Foundation and The University of Michigan.

With a handful of awards, Marshall still remains very humble and down to earth. He presented his work in front of the audience in a unique way that instantly made everyone feel connected and intrigued toward his every word and movement.

“He was fantastic. Everyone was listening closely and dancing in their chairs. He had many stories to tell and songs to sing. It’s like he was a one man band,” said Dr. Baker.

Reflecting on the event, Marshall stated, “I really enjoy the world and people. There’s always opportunities to elevate and present things in a way people haven’t considered before. You can dig a little deeper.”

Nate Marshall shows the strength of embracing our individual identities and roots, while also amplifying the beauty of literature and spoken word.

Coming up, the Beck Series is welcoming writers Charles Boyle and Randall Horton to Denison on February 20 at 8 p.m. in the Barney-Davis Boardroom.

The legacy of Denison’s cemetery and its famous alumnus