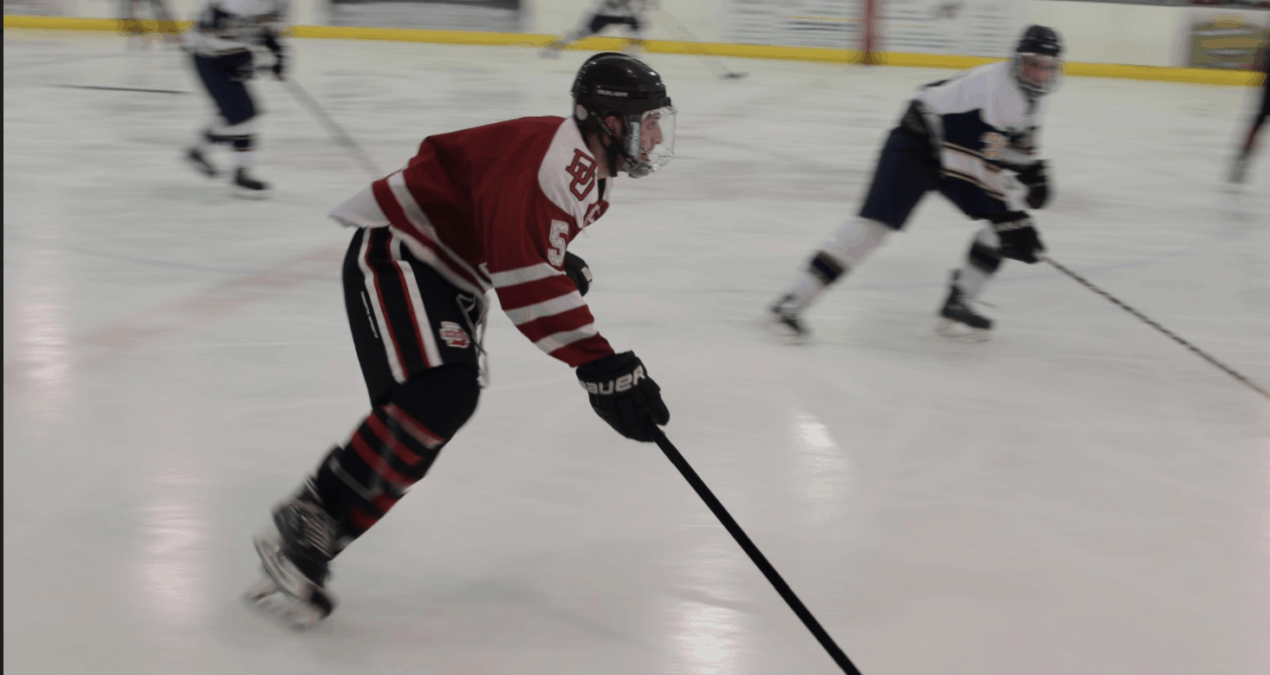 They came out with purpose.

The Big Red couldn’t have asked for a better start to their annual home tournament during Friday’s showdown with the Bobcats from the University of Pittsburgh-Greensburg. Denison set the pace early after netting two quick goals in the first four minutes of play to take control with a 2-0 lead.

Juniors Duncan Tulimieri and Ben Cousineau were the first to get the scoring started, but the Big Red offensive attack was just getting warmed up.

It didn’t take long for freshman Colin Szanyi to get into the action. Szanyi ‘21 put two more goals up on the scoreboard in the middle of the first period and the Big Red took a commanding 4-0 lead.

Cousineau ‘18 serves as captain for the team and spoke about the importance of getting off to such a hot start.

“It’s super important to play fast and physical from the start. And for our team, it is definitely better to play from ahead rather than trying to come back from behind.”

It was clear from the beginning that Cousineau and the rest of the team were prepared to put on a show for the boisterous Big Red crowd that totaled well over 50 fans.

Szanyi commented on the difference that a passionate fanbase can make on the team’s mentality.

“Of course we are always playing to win no matter what, but a great crowd gives you another reason to win. It supplies some added pressure because as players you really don’t want to let everyone down.”

With the clock winding down on the opening period, Tulimieri ‘18 added to the barrage of Big Red goals with his second of the game.

After outshooting the Bobcats 20-4 in the opening period, the Big Red had done enough to secure a comfortable 5-0 lead.

The second period saw a lot of physical play from both teams, much to the excitement of the Big Red fan section. Unfortunately, however, Denison’s fans and their unwavering passion were not enough to stop the Bobcats from inching their way back into the game.

Any time you hold the opposing team to three shots over the course of an entire period, you have done exceptionally defensively. Unfortunately for the Big Red, each of these three shots came on one-on-one breakaways in which the Bobcats were able to successfully convert.

Denison’s 5-0 lead quickly evaporated and all of a sudden the score was 5-3 after two periods.

“When we had such a big lead like we did after the first period, guys tend to get comfortable. We definitely got too comfortable, and we assumed we would be able to run through the other team,” said Cousineau, referencing some of the challenges this team faced when playing with big leads.

To credit the Bobcats, Cousineau added, “They didn’t give up. They kept playing hard, and unfortunately by slowing our game down we allowed them to get back into the game.”

Despite 14 shots on goal in the third period, the Big Red were not able to recreate the success they had in the opening period.

The Bobcats did just enough to keep the score close in a game that they were clearly getting outplayed in. They found a way to stymie the Big Red offense and create opportunities of their own, though they were few and far between.

After sneaking two more goals in during a tightly contested third period, the Bobcats had fought all the way back to tie the game at 5-5.

Nobody could have predicted a 5-5 tie after watching the way the Big Red players were flying around the ice during the first period, but that is exactly what happened.

It seemed as if the Big Red carried some frustration over into their next tournament game the following afternoon against the Cardinals of Wheeling Jesuit University. This time around, they got the job done in a decisive 8-2 victory.

Unfortunately Denison’s offense was quelled in each of their following two games to conclude the tournament. After falling 4-2 to Miami of Ohio Saturday night, the Big Red would have a revenge opportunity against the same squad the following afternoon in the championship game. In their fourth game in three days, they fell short once again, this time 4-1.