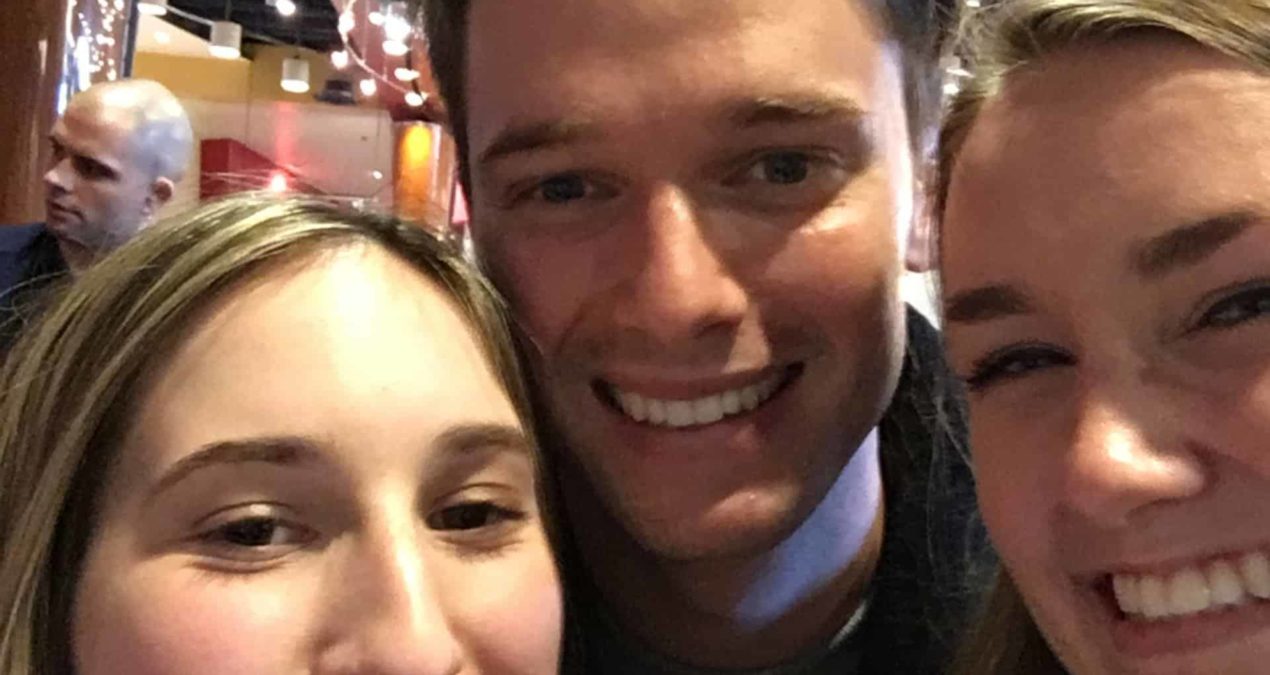 With a father that’s a famous film star and bodybuilder and a mother that is a Kennedy, it can be difficult to embark on your own journey. However, Patrick Schwarzenegger hopes to inspire students to go for their dreams with his new film.

Taking the time to meet fans before an advance screening of his new movie, Midnight Sun, Schwarzenegger shared why this film is so important to him and students who aspire to be in the movie industry.

“In the beginning it was more about nerves because it was my first big solo film and working with someone like Bella Thorne who has a lot of experience and credentials in the film industry made my more comfortable at time that was the big hump to get over. And then as you see in the film there are some emotional scenes and those were harder to get to,” said Schwarzenegger.

With this being his first big film where he stars as a lead, Schwarzenegger looked to his co-star, Bella Thorne, for advice.

“She helped me so many times and this movie is embarking on our love story and the more and more we got comfortable together the more and more our chemistry grew and was portrayed on screen so whether that was just hanging between takes and making me laugh or hanging outside of the film definitely helped,” said Schwarzenegger.

Schwarzenegger continues to work on his acting, despite his family ties to the industry. He participated in theater all through school and took acting classes growing up. He then went to University of Southern California to get a cinematic arts and film degree and business degree.

Schwarzenegger is also currently in a play class that meets every Thursday to put up new 10-page play every three weeks, despite having graduated already.

“I’m always trying to learn as an grow as an actor. When you play with people who are better than you it makes you better, just like sports. They ultimately lift you up and I’m trying to work every day. If I were to give a note of advice it would be work your butt off. Go out there an practice as much as you can learn your lines learn your character. At the end of the day its not acting its putting yourself in someone else’s shoes. Understand how they eat breath and live their life,” said Schwarzenegger, on giving advice to people who want to break into the movie industry.

Part of this love for movies and acting comes from his experience on his dad’s sets. His father, Arnold Schwarzenegger, is well known for his films. Growing up, Schwarzenegger was able to learn from his father.

“It was my dad’s version of take your kid to work. I fell in love with the sets, makeup chairs and cinematography. I loved the idea of something coming off the page and becoming life,” said Schwarzenegger.

Despite his family ties, Schwarzenegger says he doesn’t feel pressure to be an actor.

“Everyone always thinks i would but it’s just my parents being supportive of what i want to do in life. I do want to be my own person with my own name and career. Yeah im kinda in the shadow of my dad but I’m so fortunate for the life that I have. My parents have taught me so much and given me such great advice I would never trade it for the world. I need time to prove myself and I’m hoping this movie can help with that. I’m just striving everyday to be better,” said Schwarzenegger.

After sharing his new movie with a select few, Schwarzenegger now embarks city tour of nine American cities. Columbus was one of the first cities in the world to see the movie.

“In the end it’s this really epic, heartfelt, coming of age love story. It’s not your ordinary one with the aspect of the disease but I want them to come away uplifted and inspired. Maybe they’ll laugh maybe they’ll cry but i hope they have a good feeling afterward,” said Schwarzenegger.

As the movie came to an end, the audience could hear small sniffles come from the theater. With a seemingly promising future for the film, general audiences can see the premiere on March 23.