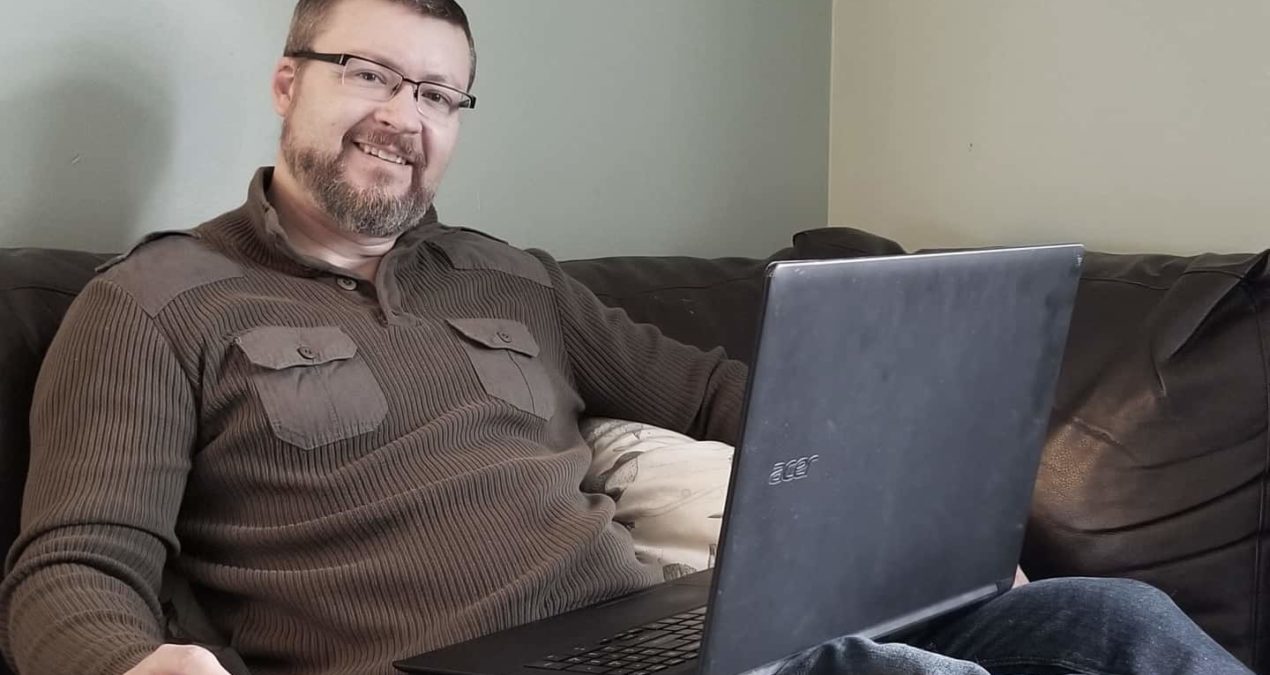 CASEY TRIMM – Denison’s tightly-knit community allows for a close relationship and network between students, faculty and alumni. In our third issue this semester, we featured comics drawn by artist Geoffrey Peart ‘02, and were eager to learn more about him and his time at Denison between 1998 and 2002. He was kind enough to share his complex journey of creativity, community and self-discovery with us.

Peart, age 37, currently resides in Brighton, Michigan and works as a Learning Consultant and Developer. His Denison career gave him the opportunity to make new friends, unravel his passions and truly feel a sense of community.

When asked about his fondest memory of Denison, Peart emphasized the community and relationship building that occurred throughout his Denison experience. Peart started on the creative, artistic path which eventually lead him to his interests in writing and helping others.

“One of the reasons I loved my Denison experience was the community. The smartphone revolution had yet to explode; cell phones were flipped open to place calls and texting wasn’t popular yet. This meant that if we wanted to talk to someone, we had to go find them. I loved the mystery and randomness of friends or strangers knocking on my room door to chat or ask me to join in some card game. It built community and relationships in a way that only Denison could.”

Without the influence of the internet or domination of cell phones, students were more inclined to engage with one another. Peart’s recollection of his time at Denison reveals the technological separation between Denison back then and now.

He noted, “The internet wasn’t a big deal yet either, but the potential was becoming clearer every day. True story, one of my friends at the time told me to watch out for a company called Google; “They’re going to be big one day,” he said.

One of his most ominous memories is that of 9/11.

“That day was eerily quiet. No one talked; we didn’t know quite what to say or think. The footage was aired live on all the monitors around campus. I was on my way to class, but just stopped and watched the towers as they stood ablaze. Obviously the world changed after that day. Graduation and entering the working world was already a scary concept. 9/11 just made the future outside of my Denison bubble seem even more perilous,” said Peart.

Also while at Denison, Peart formed the Bland Canvas art club, where he learned to exercise his leadership muscles. They added splashes of color to a few walls at Denison, one of which being a giant Alice in Wonderland inspired mural inside of the Bandersnatch. The art club provided him with a creative outlet since he opted against pursuing an art-related major. Instead, Peart dedicated his studies to psychology and economics.

As a cartoonist throughout his college years, Peart recalls addressing the major construction project that planned to demolish a large area of forest in order to build additional housing, which is now the Sunset House.

“We weren’t too happy to see the destruction of the natural surroundings at the time and my cartoons allowed me to express my frustration in visual form. Ironically, my friends and I stayed there our senior year!” Peart added.

Peart never considered himself to be an artist, but rather just someone who happened to be good at art. Post-Denison, Peart hasn’t drawn a single comic and has instead found interest in writing, since words have far more of a powerful impact for him.

After travelling to Europe and backpacking for a month post-grad, Peart volunteered with AmeriCorps where he taught literacy skills to underprivileged children in Columbus. He has always been dedicated to helping others, so with this he combined his writing interests and now lives out his passions every day.

Despite having worked in the Career Center for years, Peart still struggled to decide what he wanted to do after his time travelling and volunteering. After many years of job hopping, Peart found a niche that combined his creative skills and passion for helping people grow.

Currently, he works as a Learning Consultant and Developer. This role involves analyzing gaps in the workforce and developing digital training programs. His daily tasks range from designing new curriculum, to creating knowledge assessments.

Although Denison only took up four short years of his life, Peart embodies the creative, caring values that Denison strives to teach each and every student.