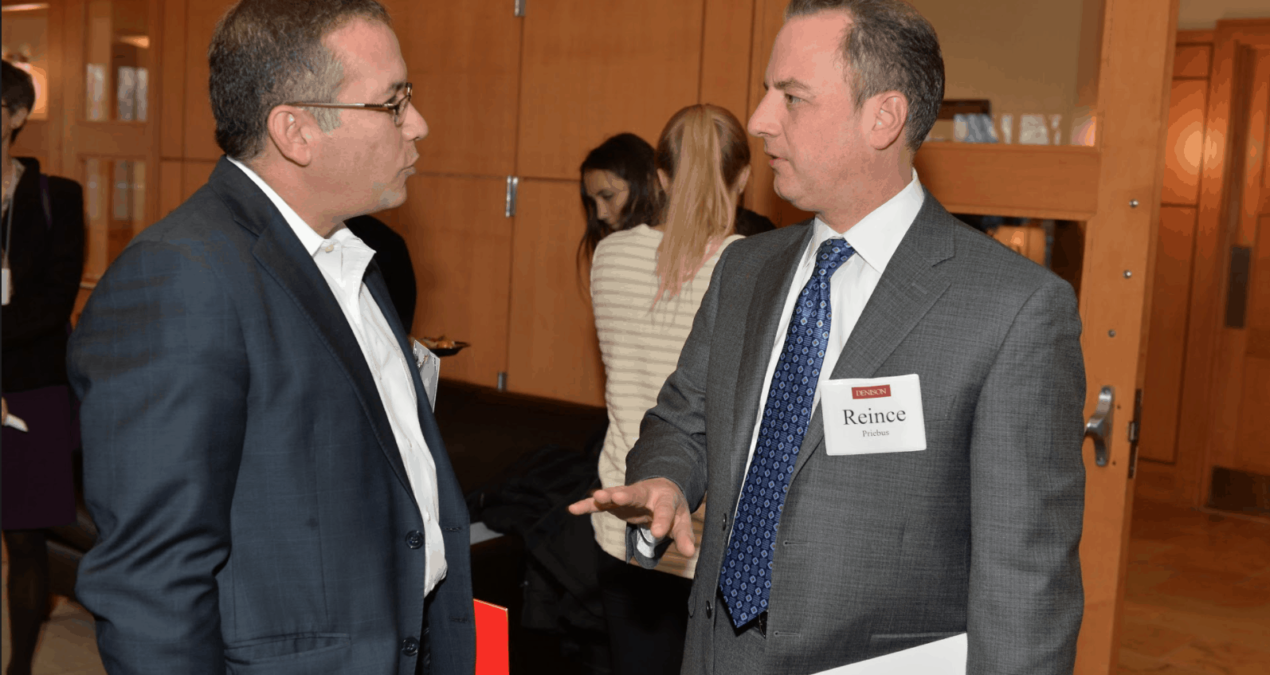 The top of the top, the President’s right hand man and the boss of the house, being Chief of Staff is no party.

Especially in a controversial, highly discussed administration, the Chief of Staff position can be put under more scrutiny.

Richard Priebus, the first Chief of Staff for President Trump, shared his experience in the job and in politics with the Denison community this past Monday.

Priebus was the 27 Chief of Staff of the United States and served under President Trump from January 20, 2017 until resigning on July 31, 2017

When visiting campus, he first held a small luncheon for a handful of students to have a question and answer session. This students represented the Denison Democrats, Denison College Republicans and The Denisonian.

Although the interaction was kept off the record, students were able to ask Priebus any question of their choosing.

“It was interesting to hear Reince talk about his experience as Chief of Staff in a White House known for its absurd approach to governing and media relations,” said Kyle Mares ‘20, a political science major from San Diego, California.

“It was really interesting to hear about the current administration from someone who not only worked within the administration but also just has a different opinion of how they are doing,” said Jack Robinson ‘20, a global commerce and political science double major from West Mansfield, Ohio.

The luncheon provided a lot of insight for students from all majors.

“No matter where you fall on the political spectrum its still really interesting to have someone come in and be so candid about what it was like to work in that capacity,” said Jordan Back ‘20, a biology major from Naperville, Illinois.

After the luncheon, Priebus spent his day on campus taking to different professors and students. At night, the community was invited to hear him speak at Swasey Chapel. Priebus, again, hoped to keep what he said off the record.

‘I was impressed by Mr. Priebus’s candor and willingness to engage throughout the day’s events including the small lunch discussion, multiple class visits, reception, and lecture. That he wanted to have most of these discussions “off the record” allowed these interactions to be more genuine a free flowing which is something I think we miss in the political debates in the media. I was even more impressed by the students through their excellent questions and ability to engage Mr. Priebus in the type of dialogue I hope the lecture is able to produce. Ultimately, I think it was a successful day full insights and discussion we don’t get in the news and daily dialogue,” said Dr. Michael Brady, a political science professor.

Dr. Brady was able to bring Priebus thanks to the “Mary Elizabeth Babcock Lectureship in the American Conservative Tradition” endowment donated in 1981 by longtime friend of the college and community Mary Babcock. This was to allow students and community members to hear and interact with speakers on political and policy issues. The first lecturer was William Buckley and recently has featured prominent conservative politicians including James Baker, Jon Huntsman and Bobby Jindal.

However, the members of the audience were of diverse political background and were not afraid to make their opinions heard. In an intense and energetic room, many people were able to speak their thoughts on the Trump Administration and Priebus’s role in government.

In addition, community members were able to find out how Priebus made his way to the Chief of Staff position.

Priebus has been in government since he started campaigning at age 16.

He was born and lived in New Jersey until his family moved to Green Bay, Wisconsin, when he was seven years old. He was known in Washington as a button-up Wisconsin guy, but he has become an important player in the first version of the Trump Administration.

He was attending Tremper High School in Kenosha, Wisconsin, when he volunteered for his first campaign. After graduating from Tremper in 1990, Priebus attended the University of Wisconsin–Whitewater, where he majored in English and political science.

After college, Priebus got his law degree in 1998 from University of Miami, in Florida. While at Miami, Priebus meet people such as Marco Rubio and Paul Ryan, who would eventually become key players in his career in politics.

Priebus then moved back to Wisconsin and became a member of the state bar and began practicing politics against. He first ran for the Wisconsin State Senate in 2004, but lost 52–48 to the Democratic incumbent.

Taking his chances again in 2007,Priebus was elected chairman of the Wisconsin Republican Party. He is the youngest person to have held that role to date. In 2009, he also became the general counsel for the Republican National Committee.

As chairman of the Wisconsin Republican Party, Priebus led the party to success in the November 2010 elections in Wisconsin, which was previously a state held by the Democratic Party. The party won control of the State Senate and Assembly, and a Republican candidate was elected Governor. Priebus continued as Wisconsin party chairman and general counsel to the RNC until 2010, when he stepped down as general counsel to run for election to chairman of the committee. He won this position in 2011 and served until appointed Trump’s first Chief of Staff.

So why did many think Priebus an important speaker to campus?

“As an institution of higher learning dedicated to critical thinking and the interrogation of ideas I think it is important for us to be exposed to, and grapple with perspectives and stances representative of the political spectrum in the world around us. In this polarized and arguably tumultuous political climate is argue it is more important than ever to hear from speakers that can provide insights and arguments that reflect the real political and policy divisions in U.S. politics. Mr. Priebus is an unique position to do exactly that by providing a first hand account of the most recent election, the current administration, and the state of polarization between the two parties. Ultimately, I hope this allows lecture series provides a spark for more open deliberation across our varied political communities that is less about persuasion and correctness but a democratic discussion about diverse views,” said Dr. Brady.