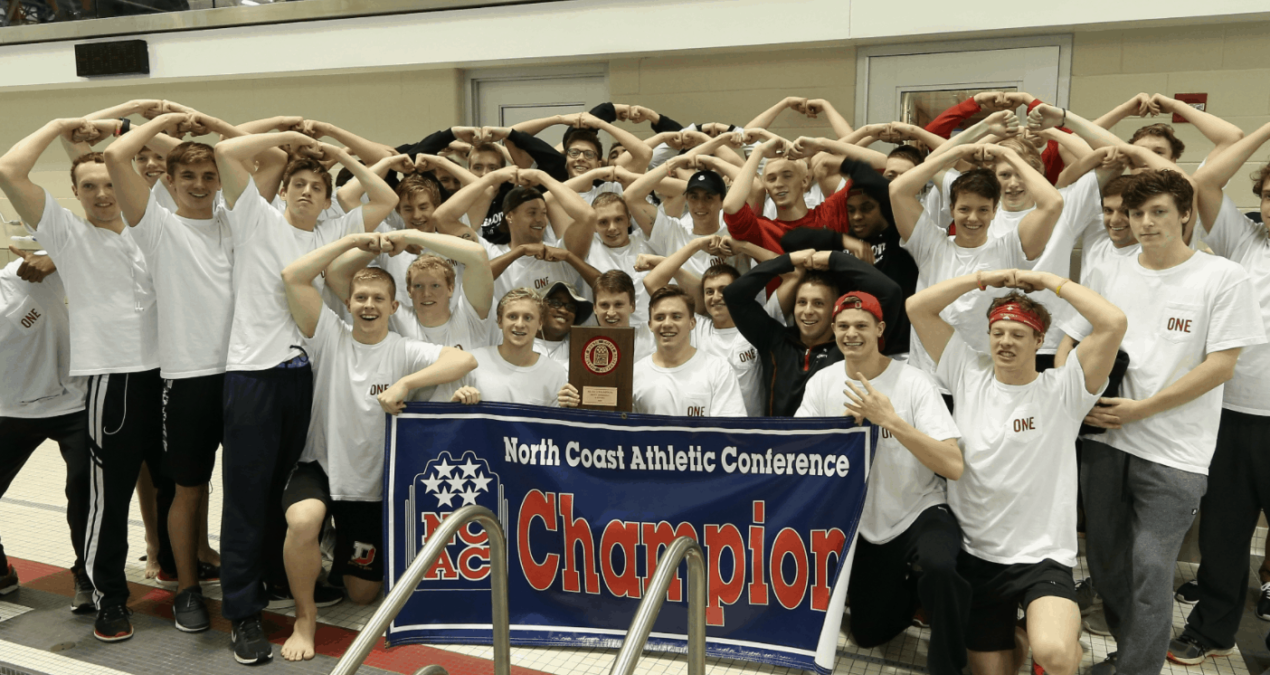 Ten years later and nothing has changed.

On February 17th, the Denison men’s swimming and diving team captured their tenth consecutive North Coast Athletic Conference championship crown. They defeated Kenyon by a final score of 1908 to 1797.5.

While winning anytime is fun, Francis Biagioli ‘20 discusses how much fun it is to beat Kenyon in particular.

“There’s definitely a motivation to beat Kenyon at the meet. All the other teams in our conference their competitive, but Kenyon is definitely our main rival, our main competitor, and so we always want to touch the wall before the Kenyon kids next to us,” Biagioli ‘20 said.

The meet was really decided during the 100 freestyle race. While the total scores between Denison and Kenyon were close going into that race, Denison had six people qualify for the final. It led to a huge meet for Denison, where each of the top five overall swimmers came from the Big Red.

As for the women’s swimming and diving team, they finished second at NCAC championships, narrowly losing to Kenyon.

A cool story came from the meet however, as teammates Zoe Whelan ‘20 and Halli Garza ‘18 finished numbers one and two in the 200 butterfly. Garza, who had won the race in the three years prior, was narrowly edged by Whelan. It was a passing of the baton of sorts.

As for the energy behind conference meets, Biagioli ‘20 comments on the different feeling in the building during the conference championships.

“At the dual meets, it’s fun to swim and win, but when we come to conference… people describe the atmosphere as electric. You’ve got all the parents. All the alumni come to the meet. It’s really exciting to see people swim fast.”

Leading up to conferences, the processes the men’s and women’s teams undergo is slightly different than it is during the regular season. The teams “taper off.”

“We rest up and start to focus. Swimming transfers from physical training to mental training. You start to prepare for your swims and get in the zone, and just work to make sure that everyone is in the right place mentally,” Biagioli ‘20 remarks.

The sophomore standout also discusses building a team atmosphere because of its importance when building towards a common goal.

Biagioli shares insight into the laser sharp focus the team brings into training day in and day out and stresses the importance of “making sure everyone is giving everything they have in practice and really holding each other accountable.” On the subject of comradery and the overall closeness of the team, he adds, “Once we get back from Christmas break the team really comes together. We go down to Florida and we have training trip, and it’s really a week and a half of hard training. It’s the kind of thing where you suffer together.”

What’s next? Well, that would be National Championships taking place at the end of March in Indiana.

As for Denison, they have more swimmers heading to National Championships than they ever have before.

Biagioli ‘20 and the rest of the team are primed to continue their success on this next stage, and he reflects on what lies ahead: “Our team as a whole has stepped up to a new level at the end of the season. We are just going to nationals and trying to swim as fast as we can. Just trying to be the best team we can. We want to show people that we are the best program. The hardest working program in the country.”

Abby Scully ‘21, takes to the field