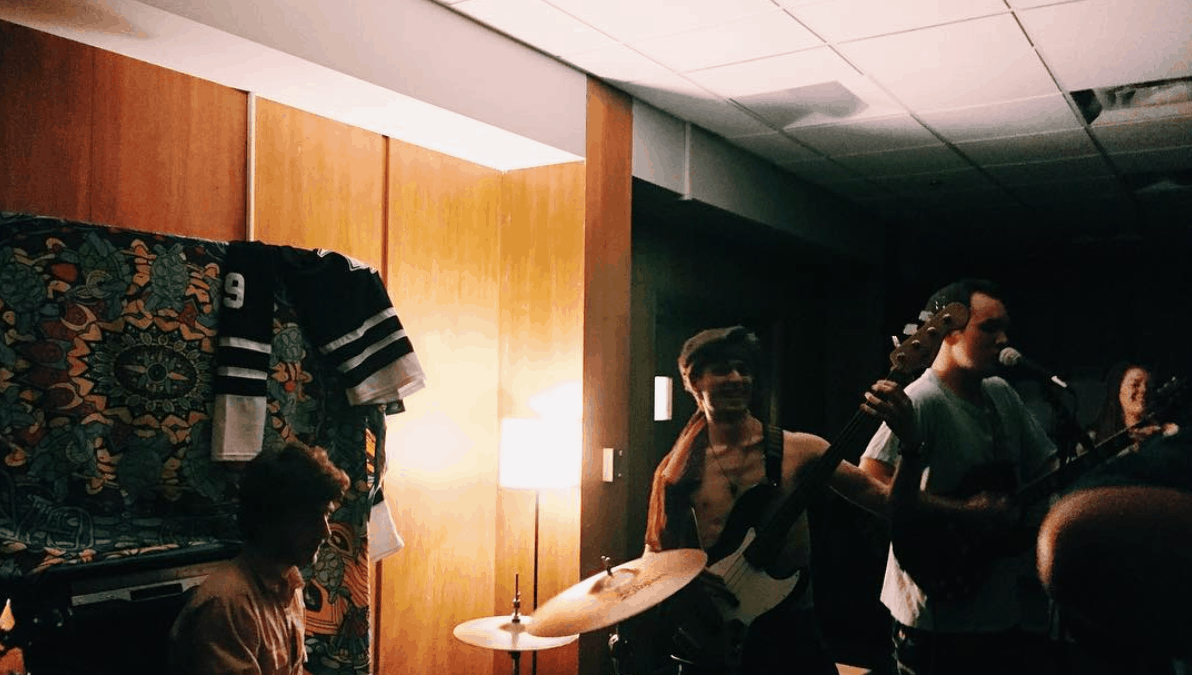 CASEY TRIMM & CHLOE SFERRA — All stress of homework and outside pressure was lost in the sweat of the air and the thump of the floor as Count Spacy took students on a musical journey.

Each set that Count Spacey plays tries to incorporate a variety of genres and sound to keep the audience’s’ interest alive. By adding new songs to their set and changing their arrangements around, they successfully maintained an upbeat, lively atmosphere that kept the crowd going.

A few songs that were debuted on Friday night were a cover of the Beatles’ “I’ve Got A Feeling” and an original song written by guitarist White, titled “Pomp”. The band’s set list transitioned from usual favorites like “Psycho Killer” and “Sympathy for the Devil” to heavier tunes like Black Sabbath’s “War Pigs” and Rage Against the Machine’s “Killing In The Name.”

A crowd favorite for many, “Psycho Killer,” was one of the last two songs and it was a moment that clearly showed how the band connects with their fans. As the band was nearing the show and running out of steam, the crowd picked up the energy with an ecstatic rendition, taking over the vocals and singing their hearts out.

Before their last song, White said, “We gotta end it. I’m exhausted.” However, the energy the students got from the show seemed to fuel them to go another hour if possible. The crowd clearly did not want the show to end.

“I could not have felt more alive. Made me dance so hard I lost my shoes,” said Monnett Hamilton ‘20, a cinema major from Columbus, Ohio.

Count Spacey has been a student favorite band for nearly two years now. At this point, some fans consider themselves band groupies and make sure to never miss a concert.

“Yeah, we definitely have groupies.It makes it more fun to perform knowing we have that kind of support. Our fans are a lively bunch and I even noticed during the performance one of our friends crowd surfing and a mosh pit at one point, both of which were a first at a Count Spacey show,” said Litchman. “There were a bunch of Count Spacey ‘firsts’ which makes this show a little more special.”

The band describes their sound as a mix of classic rock, psychedelic rock, garage rock and funk music. This was a sound that the audience members ate up. With fists in the air and a swing in the hips, there was rarely a moment to sit down and breathe.

“It was like watching a Shooting star crash into the moon then then having all of the pieces of space debris float through the open doors of the basement of Shep and lodge themselves firmly into my cerebral cortex. The finale of ‘Killing in the Name’ was so good that I thought I dislocated my jaw, but I didn’t so we’re good,” said Cecil Millen ‘20 is an international studies and Spanish major from Davidson, North Carolina.

The band, which consists of one senior, is unsure of the future after this year. However, there is still a few opportunities to see the band before the end of the semester. The band is confirmed to perform at Dobbiepalooza on April 20, as well as potentially perform during Senior Week and a show for prospect students on April 22, in the bandersnatch. Band shirts will be sold at Doobiepalooza.