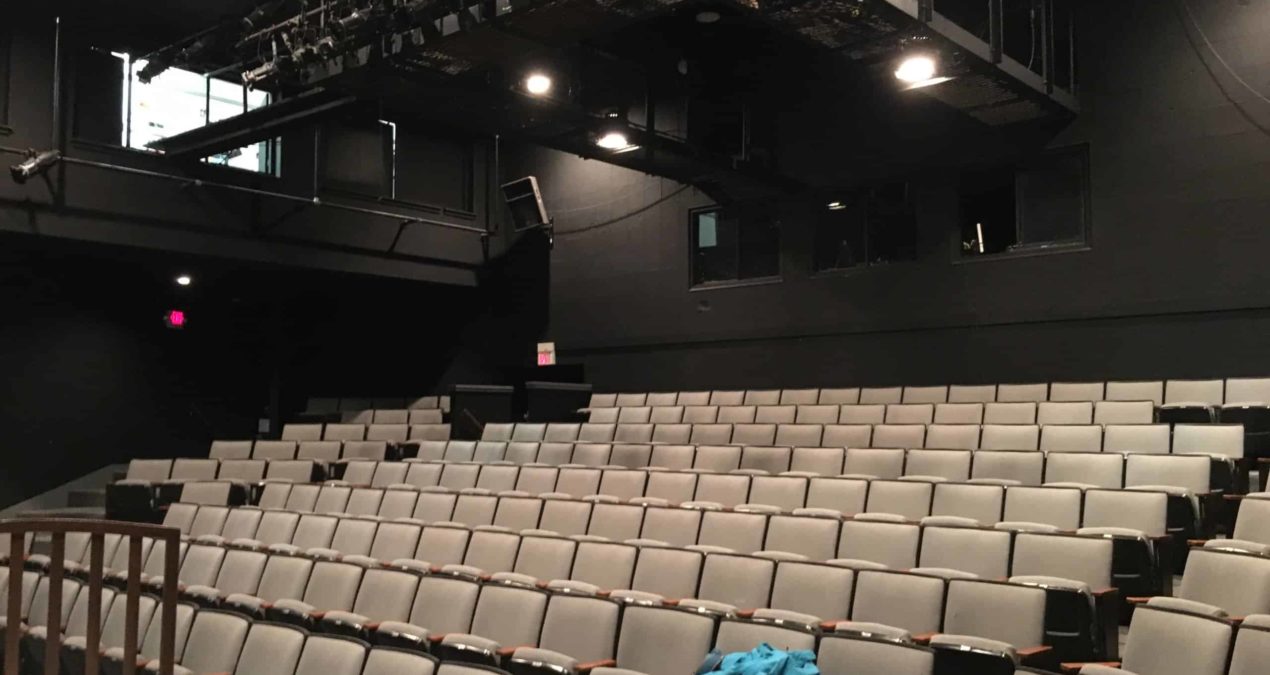 “But this is only the beginning. We look forward to the larger theater which will seat 600 and will stand to the west of this building,” read the program for the opening of Ace Morgan Studio Theater over 53 years ago.

Now, the day has come for that new building just west of the original. With the Eisner Center for the Performing Arts near completion, farewells will need to be said to the old theater building. With no more official department shows, anyone who steps on that stage could be the last.

However, before anyone gets sentimental, the theater department knows there is so much history and life in Ace Morgan to celebrate and remember. Named after LeRoy “Ace” Morgan, a Denison student from Cleveland, the building served as a memorial. Morgan was killed in 1945 in Germany by a shell burst a few hours after he was awarded a Bronze Star for his bravery in carrying wounded squadron members to safety.

Morgan’s parents made donations to Denison’s theater program that eventually summed $20,000 in honor of Morgan’s love for theater. This love has been emulated throughout the past half-century from students and professors in the building.

“It’s a peculiar little building but a fantastic building as a space for making theater,” said Mark Bryan ‘96, a professor and chair of the theater department. Bryan has taught classes at Denison for the last 15 years. “I went to Denison so I have this experience where I learned on that stage as an actor and a director. However, as a playwright, for the rest of my life that is always going to be the space that I am writing for in my head.”

It is a place of microclimates, where the halls are hot and the offices cold. Built out of concrete walls and steel doors, there is a tarp strung around the building to catch leaks from the ceiling. The best way to think about the stage is as a wide screen theater. However, as a studio theater, it wasn;t built for large scale production. Now, the needs of the department has shifted and the Eisner building will provide to work more like a theater and less like a studio.

However, the “weird” space, as Bryan calls it, has been made to work for the department. Since it was never planned to be the final building, students and professors have had extra freedom to be inventive and imaginative when getting the space to work for them.

Described as a laboratory, those who come through over the years were able to experiment with the space. If something isn’t available in the design of the theater, it could be built and added.

“If you look at the lighting you can notice there is no original grid for people to walk around and adjust the lighting. There are two big wings made of wood, built in the shop, just sitting there for that purpose to change the lights. There are little innovations all over the building,” said Bryan. “It has limitations, but those limitations have always built really interesting results.”

Since it is a studio theater, Bryan says it is the only building that works for what it was built for and intended to be. It is an intimate space that has fostered creativity from the alumni of 1965, to Jennifer Garner and Steve Carrell, to the future stars of Denison. Each student in the department has made their mark.

Garner has told David Letterman of the scrunchie business she ran with then-roommate Lynn Repasky. They would sneak into Ace Morgan late at night and use elastic and the costume sewing machines to make scrunchies. They would then sell them to students door by door, something Bryan looks back fondly of as well.

Ace Morgan is the space where the nation’s longest running collegiate improv group, The Burpees, made their mark in history.

“I think most people who have tremendous and longstanding affection for this theater will have it because of the memories they have made not the building itself. The building is something where you laugh at it because it has its little quirks,” said Bryan, “but I’ll miss it.”

A bit quirky, the building seems to reflect the theater program in its uniqueness and ability to make a lasting impression. The focus of the department as a whole is on creative artists, not interpretive theater making. This means students are encouraged to learn all the tools of production, not just how to be an actor or director.

“We believe the core of undergraduate theater education should be as a theater maker where you think theoretically and practically of all ways we tell stories as theater artists,” said Bryan.

Although a very beloved and soon to be missed space, the Ace Morgan Theater did have its limitations.

For example, scenery and set work has been forced to be minimized. The stage itself has more depth than height, which means lighting must come in at specific angles to make it onto the stage. In addition, the wings of the stage (the right and left sides) have virtually no room. This cramps the space even more as storage can be tough to find.

There is also no area for a musical ensemble to perform during a show, where as most theaters have a pit. While the large stage can hold many dancers and singers, in order to fight musicians they must also be on stage. That means musicals are more of a challenge if they require a large orchestra.

While that just increases the challenge to be creative, it also limits the ability to collaborate with other departments. The problem is not lack of ability or intent to collaborate, but rather one of space available. The dance, music and theater departments have a rich history of shared projects. However, any productions worked on by multiple departments has always been small scale with only a few musicians or one person to accompany a show. There just isn’t any room to accommodate more musicians.

Ace Morgan comes with the good and the bad. Even though it is a cherished space among alum and current students, these problems shed light on why there is a necessity for the Eisner center. Nothing can replace the nostalgia people will feel for Ace Morgan, but there is an excitement for what’s to come in the Eisner Center for Performing Arts.

“We, the chairs of the departments that will be housed in Eisner, have talked a lot about the many different ways we can collaborate. We aren’t sure exactly how it will be, but we are excited to explore and find out. It’s a little bit of a question mark, yet we are thrilled at the possibilities,” said Bryan.

As students take the next few months to say their goodbyes and closing lines, Bryan notes that you never know which weird part of the building each person will remember.

For him, he remembers the spot in the building where him and Garner signed their names to commemorate their devotion and work to Denison’s theater community.

Other students may look fondly on the back workspace where they literally built the theater and its productions. Perhaps alum can think back to sharing the two dressing rooms or searching for clothes in the several different costume closets.

In the coming years, as the dance, music and theater departments make the Eisner center their home, there will always be a little place in Denison’s hearts for Ace Morgan.

For those who remember the opening day of the theater to those who will see the closing and demolition, Ace Morgan has solidified its spot in history.

Some of the newly recruited Burpees give outsiders insight