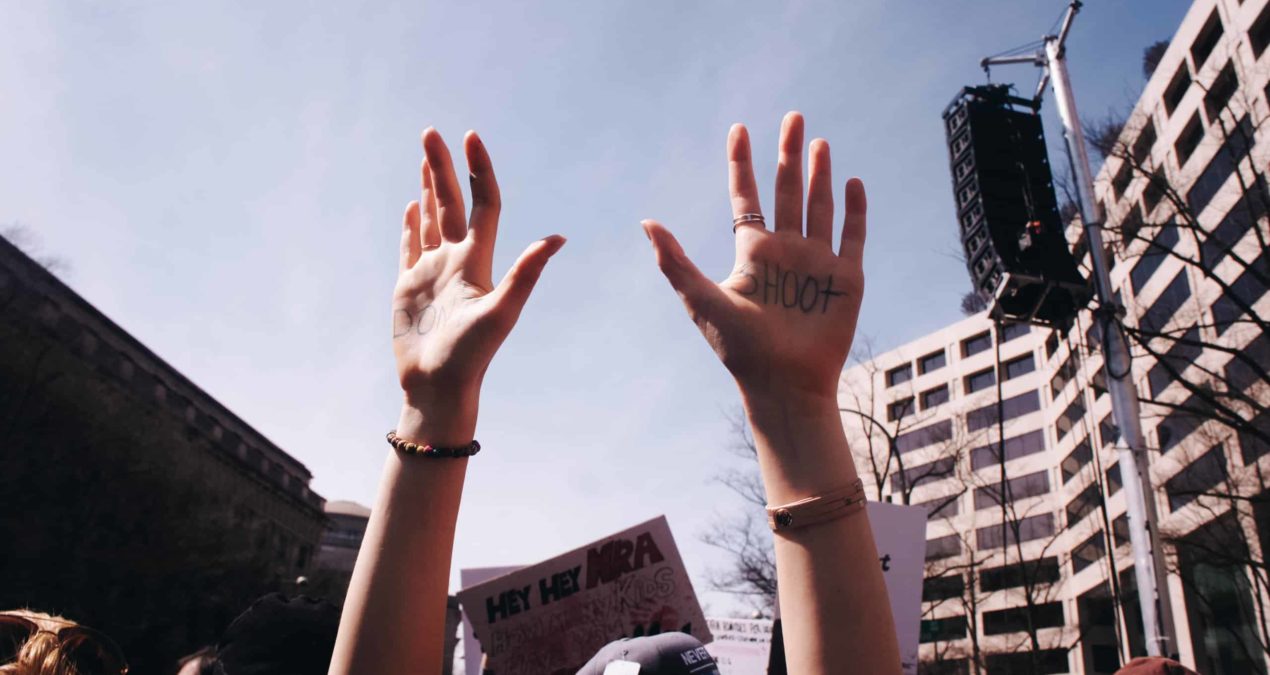 The subway into Washington D.C. might not have been as packed with bodies as the Women’s March just a year before, but the protestors students stood amongst around the country had the same fierce determination in their eyes. Carrying cardboard signs and hope for the future, they were ready to march for change.

CNN news reports used aerial photos to estimate that 200-800,000 demonstrators showed up to D.C. March for Our Lives, and dozens of sibling events took place worldwide. Demonstrators marched to say #NeverAgain to gun violence in schools, and called for government action. Before they marched though, they stood.

A week before the March for Our Lives, a national walkout was held across the country on the one month anniversary of the Parkland, Florida shooting. Students left their classes at 10 a.m., and congregated in common spaces for seventeen minutes in honor of the students no longer able to learn. Denison was no stranger to the movement as many students participated on the hill as well.

As the clock struck the hour, students packed up and gathered around the flagpole outside Slayter to share stories and concerns. The protest went on past the planned 17 minutes as many students came out to support and speak.

Craig Freeland ‘19, who spread the word about the Denison response, shared that he wanted to ensure students had the space to reflect.

“Things happen so fast here and I thought that this would allow people to momentarily remove themselves for the culture of business on our campus and collectively acknowledge a tragedy,” said Freeland.

Freeland is a part of a new initiative known as the Denison Student Union, which is working to increase transparency and promote awareness of social justice concerns.

Sarah Abou Rashed ‘21 felt there was a need to participate. She is open about sharing how gun violence in America has come to mirror injustice around the world through a political poem.

Rashed explained she was drawn to this kind of poetry because she believes “…it’s powerful to say something in places where people are mobilized.”

Several students seemed to heed her suggestion. One stepped into the circle with a call to action, imploring the crowd to get in touch with their representatives. She’d first asked for a show of hands to reveal how few students were aware of the political figures acting on their behalf, with many unsure of which political representative took their concerns to heart.

Maddy Bellman ‘18 shared her frustrations towards America’s failings, saying “I think we try to tout our country as a safe space, a different space. I don’t see it being any safer.”

Finally, Ramon Ortega ‘21 joined the speakers. From Brooklyn, then Parkland, Florida, and now Denison, his insights seemed to sum up all the efforts of the day.

“Seeing you all here gives me hope that we won’t have to keep calling home to see if our family made it out alive,” said Ortega.

Many students at Granville schools participated as well. In an emotional day, no one at Granville schools was available for a quote. This protest comes with a lot of other activist programs that work to make change on the subject of gun control. Students have also been encouraged to write to Senator Portman and Senator Brown, as well as Governor Kasich in an effort to be heard.