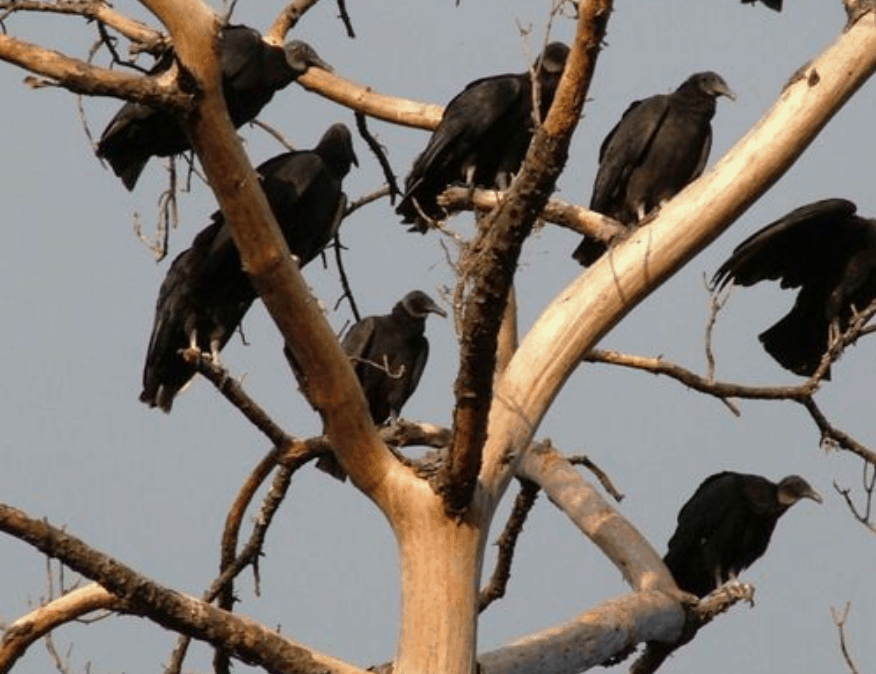 The Mysterious Departure of the Big Red Buzzards

ZOE PEARCE — Ever wonder what happened to the buzzards that lurked Denison’s campus? Students would see them towering over buildings giving the campus an eerie vibe. Whether you were amused or terrified by them, they were definitely a distinctive characteristic on campus, not to mention the school mascot. When returning from winter break, they seemed to disappear from campus and left a lot of people wondering what happened.

According to Assistant Director for News and Information Ginny Sharkey ‘83, the birds had been causing a lot of problems on campus.

“I can tell you that they have been causing a great deal of damage to the campus facilities. They roost on roofs and pick at the rubber areas that seal the flashing. This has caused leaks into buildings, and the leaks themselves have caused damage. They also roost on the outdoor sections of some of our HVAC systems, defecating and damaging those systems to the point they have to be shut down on occasion, cleaned and repaired. All in all, the damage they’ve caused has taken about $100,000 to repair – just last year alone,” Sharkey said.

There were numerous methods put in place to rid the birds from Denison’s campus. Sharkey talked about how they went about getting rid of the big problem causing birds.

“We contacted the Wildlife Division of the USDA, which has special programs to encourage vultures to relocate. The USDA used a three-prong method designed to make this area unattractive to the vultures. First, a few vulture figures were placed upside down in trees, where we had noted concentrations of the birds. Vultures are intelligent and this is an effective signal that this is not a safe area,” said Sharkey.

“A second method is to employ pyrotechnics, essentially loud sounds – to startle the birds. These sound like gunshots or bottle rockets and are deployed at dusk, just as the birds are settling in for the evening. The third method is to put large windsocks, similar to what you would see at a car dealership, on a roof where their erratic movement is a deterrent. USDA employees performed the work here on campus and in the village for about two weeks over the January break. The program was very successful, the vultures have left the campus and Granville. As the weather warms, they will tend to come back to campus, so we are occasionally employing the pyrotechnics to encourage them to leave,” continued Sharkey.

Sharkey also stated as a final remark from the university, “We appreciate that the vultures are part of the natural order of the environment, and we have no intention of causing them any harm. This USDA Wildlife program is specifically designed to make the affected area simply become unattractive to the vultures, to encourage them to move elsewhere.”

She continued, “$100,000 of damages in a year is a lot of money. We would rather not take money from other campus initiatives to repair damages when we have the ability to prevent the damage in the first place.”

Although the birds are a part of campus culture, not many seemed to have shed tears over the displacement of the buzzards. Now some may wonder, will Buzzard Roost Road ever be the same? At least now you can walk confidently to Mitchell.