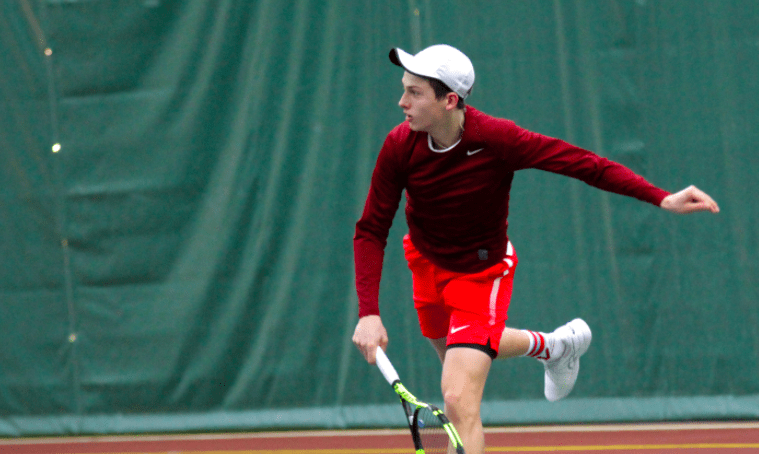 As the saying goes, you can’t win them all.

After holding their own in doubles and securing the victory at #2 doubles freshmen teammates Vlad Rotnov ‘21 and Mitchell Thai ‘21 were unable to find similar success on the court during singles. They weren’t the only ones who came up short on the singles court, however, as the Big Red dropped five of the six singles matches, two of which were stretched to three sets. Patrick McGuigan ‘21 ended the day as the only member of the Big Red to come out on top in singles after gutting out a quality 6-3, 2-6, 6-4 win in #6 singles.

Despite the 7-2 loss at the hands of the Tartans, who’s singles lineup features two of the top-20 ranked players in Division III, the team remains confident moving forward.

Rotnov ‘21 has already secured the #1 singles spot in his first year playing for the Big Red with his stellar play, including a huge win earlier in the week over last season’s NCAC Player of the Year, Titas Bera of Wooster. Rotnov ‘21 comments on the takeaways he and his teammates draw from a loss like the one they suffered against Carnegie Mellon.

“Each of us can see how our game is progressing if we have a challenging match which everyone did. Each person could then see what was working well for him and what he needs to work on in order to perform better and help the team grow as a whole.”

Having a short memory is critical in all competitive sports, and this is especially true in tennis. And besides, the Big Red have every reason to maintain laser-sharp focus as they gear up for the final stretch of the regular season.

Although Rotnov ‘21 and his freshman teammate Thai ‘21 sit atop of the singles lineup at this stage in the season, they are far from the whole story on a remarkably deep Big Red roster. This year’s squad has a strong core of experienced players to complement the talented recruits.

Senior Captain, Jamie McDonald ‘18 certainly has plenty of experience of his own to offer to the younger guys on the team, and he speaks to the expectations heading into this season.

“I’d say there are definitely bigger expectations for this season given both our recruiting class and returning starters. We see big opportunities both in our conference and nationally with the talent we have from top to bottom. I think everyone is in agreement that we’ve got a chance to do something special this season.”

The Big Red definitely aren’t lacking in talent needed to make some noise when the postseason roles around at the end of the month. But in order to find the kind success they are looking for, the mentality these players bring with them onto the courts will be paramount.

“We need to keep bringing intensity to every match and especially with the talent we have, really have the belief that we belong in the upper echelon of teams. Playing top teams is key to giving us good experience, so this stretch of the season is very important,” McDonald ‘18 adds.

The Big Red will surely be locked in when they put their record of 6-2 (1-0 NCAC) on the line in Gambier, Ohio at 4:30 p.m. this afternoon against a familiar rival in Kenyon.