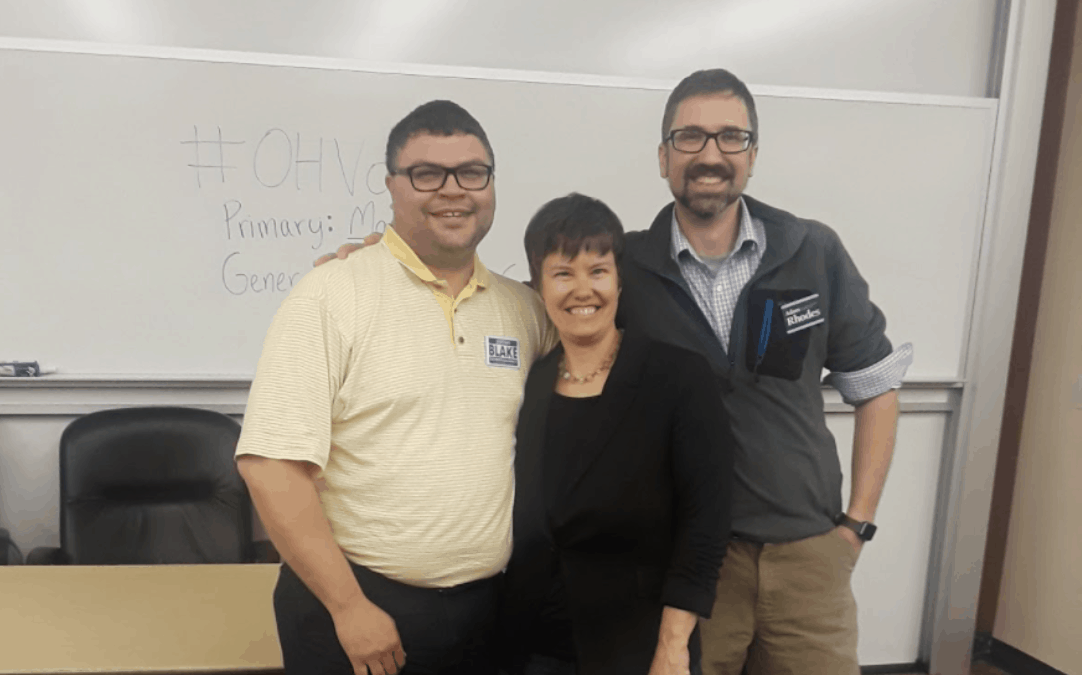 Licking County has been a historically red county with every countywide elected office and state legislature position held by a Republican. These local democratic candidates are hoping to challenge this.

All three are challenging incumbent Republicans such as R-Rick Black against Rhodes; R-Scott Ryan against Blake; R-Jay Hottinger against Miller.

While each candidate had their own plans and ideas for what they would do if elected, there seemed to be a general thread of shared values between the candidates.

Rhodes, co-founder of Homestead Beer Co., puts a strong emphasis on the importance of voting. He told the crowd, “Everybody is the same and has the same opportunity here. The world should be just and this can only be done through voting.”

As a small-business owner, Rhodes wants the voices of the people to be heard. He feels that the government is “by and for the people” and, as commissioner, wants to make this a top priority. Rhodes places an emphasis on a raising the minimum wage to become a living wage, to improve transportation and to encourage government participation among people.

Blake, who is running for the State House, is a Denison alum who works in I.T. Services at Denison. As a former Newark School Board member (and former School Board president), Blake knows just how important education is. He believes public education is a state responsibility and should be a state priority.

Like his fellow candidates, Blake prioritizes issues such as raising the minimum wage. He vocalizes that many people are working, but are not earning enough to provide for the needs of their families.

He wants to place a focus on the state budget and reallocate money for drug treatments to combat opiate addiction, education and for services such as the fire and police department.

While many major tech companies are moving to Licking County, Blake worries that there is not enough investment going in to training people in Licking County for these jobs and wants to fix that by investing in workforce development and CTECH.

Miller, a progressive mother turned politician who has not previously held a public office position was inspired to run after the 2016 election after feeling that “our democracy is in trouble.” She cited feeling inspired by people such as Emma Gonzalez, Parkland shooting survivor and gun-control advocate, whose bravery and courage has energized and encouraged Miller to want to make a difference.

She places a strong emphasis on values such as “truth and love,” values that Blake and Rhodes went on to echo. She hopes to see these values made tangible in the community by highlighting the importance of things such as a “livable income, education that is affordable, clean air, water, soil and communities that value everyone.”

Miller plans to raise the minimum wage; explaining that the low minimum wage is at the root of almost every issue she hopes to address. She encourages those in power to listen to scientists on climate change, saying, “It’s appalling that as a nation, we are ignoring scientific research in our policy making.” Miller went on to address ways that she feels she can make an impact at the state level to combat climate change.

After attending the event, Isaac Bertman, ‘19 and a philosophy, politics and economics major, said “It was great to be able to meet the candidates in person. I liked how down-to-earth they seemed, it was really a reminder that change in the public sphere comes from everyday people getting involved.”

While the registration period has closed for the primary election, the general election, on November 6, is still open. As the candidates emphasized throughout the conversation, “You can say what you believe in, but can only really prove it by voting.”